In 1990, the Pasig River was officially declared biologically dead. A renaturation programme has breathed life back into the waters flowing through the Philippine capital and has now been awarded an international prize for its efforts. But there’s still much to do.

Manila – Whiskered terns and black-headed gulls circle over the shimmering water. Below them, a man in a peaked cap is paddling. He glides slowly across the Pasig River in a canoe is made of Styrofoam. The paddler looks to the left, then to the right and manoeuvres his cuboid single-seater to a floating object. He stretches his suntanned arm into the river and fishes out the remains of an old plastic bottle.

“The people here are resourceful,” says George Oliver dela Rama, spokesman for the Pasig River Rehabilitation Commission (PRRC), a Philippine government renaturation programme that is presently patrolling and observing the action from a boat. “They have nothing, so they try to stay afloat by selling plastic.” Doing business with waste is actually illegal, he says, but at least the searchers are helping get rid of a small portion of the garbage that the inhabitants still dump into the river. 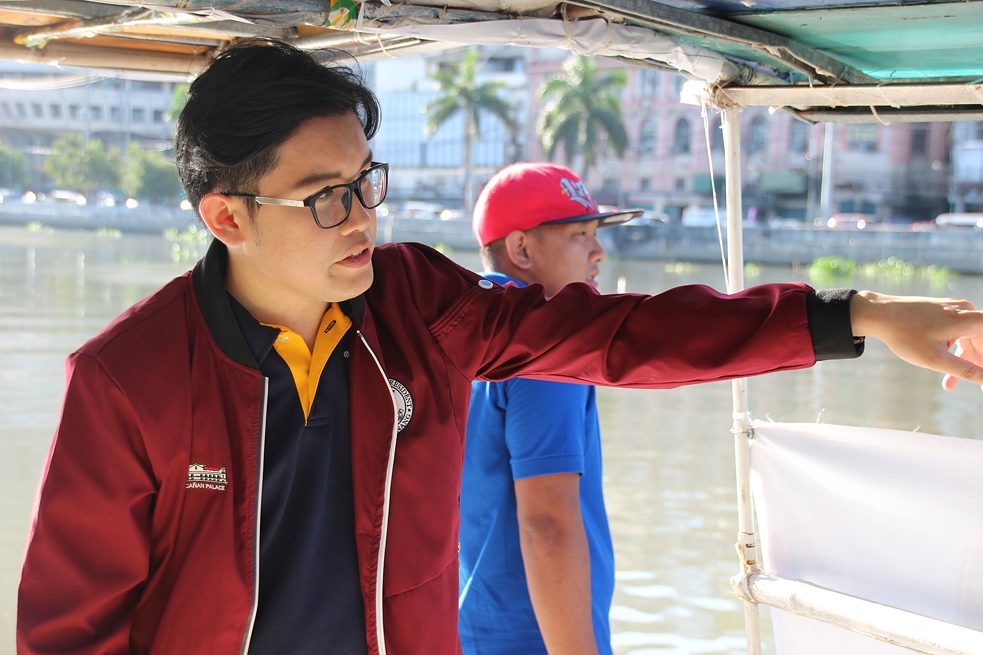 The Pasig River, which meanders 27 kilometres through the metropolitan area of Manila, is still among the world’s rivers that carries the most plastic waste to the sea. According to Greenpeace, more than 67,000 tonnes of garbage flow downstream each year, mainly during monsoon season. According to a study in Nature Communications, this earned the Pasig the title of “2nd biggest source of plastic waste for its size.” According to Greenpeace, worldwide about eight million tonnes of plastic end up in the seas each year. In other words, “one truckload of plastic waste per minute,” writes the environmental organisation.

The Pasig River problem dates back to the 1980s when industry and factories settled on its banks, disposing of chemicals and industrial waste in the river. In the 1990s, the Pasig was declared biologically dead. No fish, no plant, no living organism could survive in the waterway. In some of the 47 branches of the river, the water could be crossed without a bridge via the accumulated piles of plastic. The metropolitan area lacks suitable space for landfills. Although Manila has a municipal waste system, it is operated by 17 local administrations. The result is chaos and inefficiency. Beaches disappeared under the growing trash piles. Instead, entire villages of tin huts settled on the dirty shorelines.

The renaturation programme carried out by the PRRC has been particularly effective in battling the problem in recent years. Approximately 18,000 people were relocated from the floating landfills to housing blocks downstream. This is one of the chief reasons why the programme has now been awarded the Asian River Prize by the International River Foundation (IRF). David, the Pasig River, beat Goliath, the Yangtze in China. Other reasons for the award included the raising of local environmental awareness, the preservation of 37,000 metres of riverbank, the cleaning of 17 river branches and the diversion of nearly 22 million kilogrammes of waste.

The patrol boat is cruising under a bridge. Ten boys stand crowded on the bridge piers making a game of jumping into the water from the seven-metre-high projection: one with a somersault, one without, one holding his nose shut, another wriggling his legs. As the boat turns around to allow the guests on board to take a few snapshots, the children start up again, wiggling their rears, dancing, laughing.

George dela Rama laughs back. “Does everyone have a photo?” he asks. For three years, the 34-year-old has been spokesman for the renaturation programme founded by the government in 1999. “We’ve achieved a lot,” he says, pointing at the birds circling the countless islands of water hyacinths. “Nature’s making a comeback", he says, sounding enthusiastic. Eight different species of fish have even returned to the water.

One of the water hyacinth islands is too big, notes the captain. Slowly he steers the boat to the island plants. Two helpers crank down a grate on an opening at the bow. The floating plant is swallowed up as if in the mouth of a hippopotamus. The men pull up the plant. An old slipper and a plastic bottle also appear in it. They stuff the plant in a sack. “If the hyacinths grow beyond a certain size, they sink to the bottom and clog the river,” explains dela Rama. This is why the everyday routine includes fishing things out.

Financial support from the government is meagre. “We only have two boats that we can use,” says dela Rama. With four to ten people, the organisation checks the inflows and the growth of water hyacinths several times a week. “Unfortunately, we can’t get out every day because we don’t have enough money for fuel.” Over the past eight years, the programme was provided with 4 million US dollars. “That’s peanuts in an international comparison,” says dela Rama.

The PRRC partners with the Metro Manila Development Authority (MMDA), the Philippine Ministry of Infrastructure, which not only works on the Pasig garbage problem, but also has to find solutions for the constant heavy traffic in the metropolitan area. George dela Rama has an idea: “If we had four ferries per hour running on the river, we would get 78,000 commuters off the streets.”

Is renaturation of the river even possible? “There’s still a lot to do. What we’ve done is just a start,” says dela Rama, looking at the waving people and fishermen on the riverbank. “The most important thing is that people understand that the Pasig River is their habitat.”

Katrin Hartmann from MOZ in Berlin is an exchange journalist at ABS-CBN for three weeks in Manila. The article “Pasig River out of Rehab?” was published by ABS-CBN News on April 20th 2019.