Martha Dalton
Why is homeschooling illegal in Germany?

Why homeschooling is illegal in Germany | Photo (detail): © Colourbox

Teaching children at home? It’s illegal in Germany. People from other countries often can’t believe it. Close-Up journalist Martha Dalton from the United States was one of them. She decided to take a closer look.

Martha Dalton on air at Zündfunk


The Stauffer family has five kids. They live in Cincinnati Ohio, in the Midwestern United States. Myka, the mom, homeschools four of the family’s five children. The Stauffer’s kids aren’t alone. An estimated two million children in the U.S. are homeschooled. It’s part of a philosophy called “school choice,” which gives parents several options, including homeschooling.

Homeschooling is illegal in Germany

Homeschooling wasn’t always legal, though. The U.S. finally allowed it in every state in 1993. Germany, on the other hand, banned homeschooling in 1919 and hasn’t allowed it since. Hans Brügelmann, a former education professor at the University of Siegen, says there were two main reasons why officials didn’t want parents educating their children at home. First, he says, it was hard to get poor children into a school-routine. Farmers liked to use their children in the field for work, which led to “the children going to school very irregularly.”

Requiring kids to go to school ensured their families didn’t make them do other jobs to help make ends meet. The second reason, Brügelmann says, was a desire to mix the classes.

“The upper classes – the nobles, the bourgeoisie – had, so to speak, bought the education for their children by giving lessons to their children through specially paid tutors,” says Brügelmann. But the Weimar constitution advocated the idea that all children from all walks of life should come together at school.

Homeschooling – is it really so bad?

Donnelly is senior counsel with the Homeschool Legal Defense Association. It’s a law firm that represents homeschooling families. Although the firm is located in the United States, Donnelly has represented several German families who have wanted to homeschool their children. Some of them felt so strongly about the issue, they’ve sought asylum in the U.S., he says.

What puzzles Mike Donnelly most is the infringement on freedom, although it is one of the basic rights. But he understands the reasons German courts have upheld homeschooling laws. For example, they say children need to learn how to socialize and accept people who aren’t like them. But Donnelly says those are common misconceptions about children who are homeschooled. There are homeschooling movements all around the world – in places like Australia or Canada, the United States, Mexico, even Russia, the United Kingdom, France. “Germany only needs to look at the evidence to find that these children also learn to be members of society, they’re tolerant.”

Donnelly has also represented a homeschooling family who still lives in Germany. Dirk Wunderlich says he and his wife chose to homeschool for several reasons. For one, they didn’t want their kids to be indoctrinated by the government. 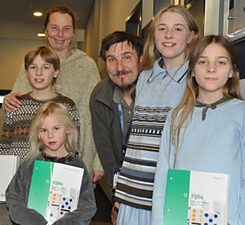 The Wunderlich Family | Photo: © HSLDA/Dirk Wunderlich This is usually an argument used by Reichsbürger or sects in Germany. But Wunderlich said there were other reasons, too. “Of course spending time with our kids. School is something completely artificial, abnormal,” says Wunderlich. “For millennia, knowledge transfer has taken place vertically, from parents to children, including grandparents to grandchildren.”

In 2006, the Wunderlichs were fined several hundred euros for homeschooling. The family then moved to France, where homeschooling is legal. But the parents were unable to find long-term work there. So, they moved back to Germany.

When they did, police showed up at their home and removed the four children from the parents’ custody. Dirk Wunderlich says the family was willing to agree to government supervision, but officials wouldn’t budge.

“In Germany, they refuse to debate compulsory schooling and are simply not willing to compromise,” says the father. “Then children are sacrificed on the altar of the reason of state, as it was in our case.” The Wunderlichs decided to stay in Germany and take their case to the courts. The outcome was mixed. The family had claimed the authorities violated their rights when their children were taken away. The court disagreed. But it did let the parents retain custody of their four children. The court also said the Wunderlich children hadn’t been harmed by their homeschooling experience. But homeschooling is still illegal here.

Mike Donnelly is hopeful that things could eventually change and parents might be allowed to homeschool their kids even if it comes with some regulations. For him, “homeschooling is a human right.” He says that families should have the choice to decide how their children are taught.