Competing Narratives
On the Global Crisis of Liberal Narratives

At the two-day public conference ‘Competing Narratives: On the Global Crisis of Liberal Narratives’, approximately 200 participants, including numerous international activists, artists and academics, will discuss the ‘contest of narratives’ (Frank Gadinger) with respect to liberal and illiberal narratives in the context of overarching themes such as human rights, freedom of speech and expression, sexual orientation, flight and migration.
Programme download

Over the past 300 years, liberal narratives have established themselves world-wide that seek to protect the individual from the power of the state and of other actors and to promote his free development. These include consensus on the meaning and validity of human rights, the independence of justice and the media as a necessary element of a functioning democracy, but also the specific significance - and responsibility - of private-property rights in a market economy. Currently, illiberal narratives are gaining ground internationally and are putting liberal narratives and thereby the open society under pressure. One example are competing narratives on the role of non-governmental organisations: for some they are actors of a dynamic civil society, for others agents of hostile powers..

The two-day conference ‘Competing Narratives: On the Global Crisis of Liberal Narratives,’ to be held on 24 and 25 March 2017 in Berlin, will spotlight central questions on these phenomena: do illiberal narratives exist in countries such as China, Germany, France, India, Poland, Russia, Turkey and the USA and what strategies are they pursuing?  What meaning do the concepts of ‘liberal’ and ‘illiberal’ have today, if any? What new advocates of liberal narratives are active, and how can the open society be defended? Approximately 200 participants, including numerous international activists, artists and academics will discuss the ‘Wettkampf von Erzählungen’ / ‘contest of narratives’ (Frank Gadinger) in the context of overarching themes such as democracy, human rights, freedom of speech and expression, state interventions and encroachments, sexual orientation and gender, and flight and migration. The public will be able to participate in the discussions following the speakers’ respective talks. Performative elements will complement the contributions. Participants include Nigerian slam poet Efe Paul Azino, Russian political scientist Ekaterina Schulmann, Hong Kong economist Chandran Nair, American jurist Michele Goodwin and Indian cultural journalist Ranjit Hoskoté.

The conference ‘Competing Narratives: On the Global Crisis of Liberal Narratives’ is a joint event of the Goethe-Institut, the Heinrich Böll Foundation, the Federation of German Industries and the  Käte Hamburger Kolleg/Centre for Global Cooperation Research. 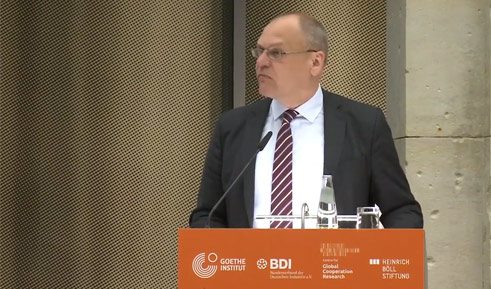