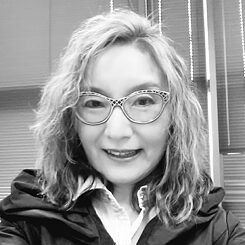 © Prof. Dr. Jeongwon Joe Jeongwon Joe is Associate Professor of Musicology at the University of Cincinnati’s College-Conservatory of Music. Her primary areas of specialization are contemporary music and film music, especially, the relationship between opera and film. Dr. Joe is the author of Opera as Soundtrack (Ashgate, 2013; Paperback edition and e-Book published by Routledge, 2016). She is also co-editor of Between Opera and Cinema (Routledge, 2001) and Wagner and Cinema (Indiana University Press, 2010), whose Spanish translation was published by Fórcola Ediciones in 2018.

She serves on the editorial board of Cambridge Opera Journal and an associate editor of The Journal of Film Music. She published articles on such topics as Bill Viola’s The Tristan Project, Milos Forman’s film Amadeus, Philip Glass’s opera La Belle et la bête, Gérard Corbiau’s film Farinelli, and David Lynch’s film Blue Velvet. Her current research projects include “Voice Without Bodies; Bodies Without Voice: The Symbolic Real in Opera,” an essay to be published in the collection Slavoj Žižek and Music and another essay “Authorial Power of the Voice and Music in Chan-wook Park’s Oldboy” to be published in Music in Action Films: Sounds Like Action! edited by James Buhler and Mark Durand.

Abstract
W. Stephen Bush noted, “Every man or woman in charge of the music of a moving picture theatre is consciously or unconsciously a disciple or follower of Richard Wagner” (quoted in Matthew Wilson Smith’s article “American Valkyries: Richard Wagner, E. W. Griffith, and the Birth of Classical Cinema,” p. 229). My lecture focuses on cinematic elements in Wagner’s operas, including The Flying Dutchman and Parsifal, and how they influenced certain film directors and film music composers. For instance, I argue that the instructions for the Dutchman’s entrance song in Act 1 foreshadowed the “Mickey-mousing” technique in film, as they read “… the first notes of the ritornello in the aria accompany the Dutchman’s first step on shore; … with the first crotchet of the third bar he takes his second step, … the third and fourth steps coincide with the notes of the eighth and tenth bars.” (quoted in Mary Ann Smart’s book Mimomania: Music and Gesture in Nineteenth-century Opera, p. 177). I also explore different effects of Wagner’s music in certain films, including Jean Negulesco’s Humoresque (1946), Jonathan Glazer’s Birth (2004), and Lars von Trier’s Melancholia (2011). Bill Viola’s The Tristan Project (2004) is not a film but Viola’s video images serve as the visual component of the opera, replacing live onstage performance. I discuss this work to demonstrate how Viola’s visual temporality supports Wagner’s musical temporality based on my interview with Viola.