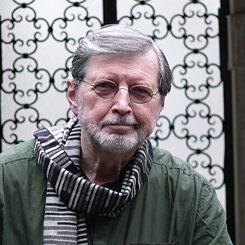 His own research interest focuses mainly on European religious history from Late Antiquity to the Renaissance and the appropriation of classical mythology and philosophy, and interreligious dialogue in medieval and early modern times. Another focus of interest is Method and Theory in the Study of Religion, as distinct from Theology. As a university teacher he designs interdisciplinary seminars in cooperation with colleagues from various disciplines, such as Islamic studies, musicology, theatre Studies and ecological modeling. His current research project, carried out with colleagues from Anthropology, Sociology of Religion, and Islamic Studies, focuses on Sacred Space in Durban and beyond.

His recent publications include:


Abstract: Wagner and Islam
It is well known that Richard Wagner was deeply interested in and well informed about Buddhism, having read, for instance, the works of French Indologist Eugene Burnouf. During his stay at Paris Wagner also developed an interest in Islam, especially in the encounter of Islam and Christianity in medieval Southern Italy and Sicily. His interest resulted in the draft for the opera Die Sarazenin (The Saracen Woman) dealing with the last phase of Christian-Muslim coexistence and cooperation in this area. Although never finished and composed, this draft represents an important step in the development of Wagner’s conception of religion, leading ultimately to the Parsifal and the theoretical essay on Religion and Art. It seems reasonable and rewarding to take Die Sarazenin as the point of departure for reflections along two different lines: first, by relating Wagner’s presentation of Islam to the historical context of Islamic/Christian coexistence in medieval times; second, by relating his final conception of religion to recent versions of Islam that are emerging in the Islamic/Christian encounter in modern times.