On 5 September 2022, Werner Herzog will celebrate his 80th birthday. His work has had a decisive influence on New German Cinema and makes him an important representative of international auteur filmmaking. To mark the occasion, we take a look at five films from his rich oeuvre. 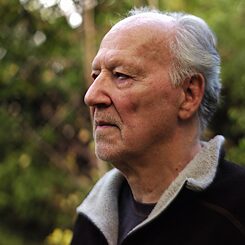 © Werner Herzog Film Werner Herzog, along with Rainer Werner Fassbinder, Alexander Kluge, Edgar Reitz, Volker Schlöndorff and Wim Wenders, is part of the first generation of New German Cinema. After the “Oberhausen Manifesto” of 1962, in which young filmmakers renounced commercial and conservative cinema of the post-war period in the Federal Republic of Germany (“Old cinema is dead. We believe in the new.”), these auteurs created films using very limited economic means, learning to extract both the greatest possible authenticity and the greatest possible aesthetic effect from their sets (which couldn’t cost anything) and actors (often amateurs or young inexperienced actors).

This resulted in a unique mixture of very direct visual naturalism and poetic stylisation in the dialogues and in the acting; a strangeness in the familiar, an irreconcilability between the characters and their environment. In this, method and message corresponded to each other: This cinema was about people who are not really at home where they live, about the fact that as a young person you can’t quite decide whether you are liberating yourself or whether you are simply being left alone.

The aesthetics of this new German cinema reflected the sensitivities of many young people in the Federal Republic of Germany in the 1960s and 1970s who were just as unhappy with the general repression of the history of Naziism and the World Wars as they were with the blind consumerism in the “economic miracle.” They wanted to set out for an uncertain future, but at the same time they felt the loss of familial and cultural security. This cinema was about outsiders, refuseniks and nonconformists, and in the film world of Werner Herzog in particular, a powerful mythology emerged around the lonely dreamer who embarks on a great adventure at the edge of civilisation, and about people who, despite physical or social disadvantages, don’t allow themselves to be deprived of the right to an independent life. There was something very unique about Werner Herzog’s film dreams back then, and at the same time they spoke from the heart of many people of the era.

In Werner Herzog’s early films, one watches, as it were, someone who is reinventing cinema for himself. Nature, which is portrayed as a formidable force, is seen with a mixture of defiance and wonder: It challenges the lonely dreamer to embark on a project, however ludicrous it may seem, be it building an opera house in the middle of the Amazon jungle, as in Herzog’s successful Fitzcarraldo, climbing mountains, building airships, creating works of art or going where no one has gone before. For this rebellion against the natural and social limits of humanity, Klaus Kinski was the ideal actor for Werner Herzog; an obsessive too, who starred and played the title role in a total of five films with him, and to whom the director later dedicated a documentary with the telling title My Best Fiend.

But this heroic yet tragic image of the lonely dreamer in battle with mercilessly beautiful nature is also contrasted in Werner Herzog’s film world with another view, which, for example, full of empathy and sympathy, takes us into the world of a deaf-blind woman in Land Of Silence and Darkness. In many of Herzog’s films, in addition to the fascination for obsession, dreams and adventure, there is also a trace of compassion and, not least, a very distinct sense of humour.

Both his feature films and his documentaries always reflect something like a magical autobiography: “I am my films,” says the director in the film portrait of the same name. They are the films of a man who can be at once as gentle and humble and as determined and unbending as almost no other. This contradiction runs through what has become an enormous filmography with artistic and commercial highs and lows. But even in films that have met with criticism, certainly not unjustified, such as the slave trader story of Cobra Verde, it is evident that cinema is made for people like Herzog, and people like Herzog are made for cinema. The great challenges that the director takes up in each of his projects, for which sometimes a traditional film character is needed and sometimes not, always, in the end, come down to seeing. Seeing how the world opens up, how the hidden becomes visible and sometimes (as in The White Diamond) it is also about keeping a secret better. Perhaps, in this magical, romantic gaze, Werner Herzog, the filmmaker who can only be at home in the world, has always remained very German.

Land of Silence and Darkness

Aguirre, the Wrath of God

To the film series "Celebrating Werner Herzog!" on Goethe on Demand

Back to “Goethe on Demand”