Join dancer, choreographer, and educator Michael Schumacher with moderator Beata Stankevic, a programmer and cultural manager of performing arts, in conversation about Schumacher’s experience collaborating with internationally renowned choreographer, William Forsythe. A long-time collaborator of Forsythe’s, Schumacher’s first-hand experience provides unique insights into Forsythe’s interdisciplinary choreographic methodologies and his profound impact on the field of dance and beyond. 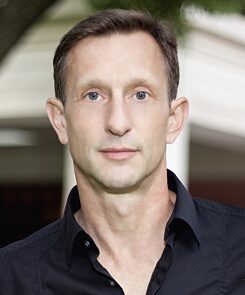 © Privat Michael Schumacher is a performing artist with roots in classical and modern dance. He has been a member of several groundbreaking companies, including Ballet Frankfurt, Twyla Tharp Dance, Feld Ballet, Pretty Ugly Dance Company, and Magpie Music Dance Company. As an independent artist, he has appeared in productions of Peter Sellars, William Forsythe, Dana Caspersen, Sylvie Guillem, Mark Haim, Paul Selwyn Norton, and Anouk van Dijk.
As a choreographer, Schumacher has collaborated with the dancers of Ballet Frankfurt, Netherlands Dance Theater I and III, The Dutch National Ballet, Dansgroep Amsterdam, and Jin Xing Dance Theatre in Shanghai. His work has also come to the forefront in several productions of the Holland Dance Festival. Specifically for the festival he created Queen Lear, in which he and Sabine Kupferberg transformed Shakespeare’s epic narrative into a poignant duet. Together with Jiří Kylián, Schumacher created the highly acclaimed Last Touch First, which has been performed throughout Europe, Asia and the U.S.

Over the past twenty-five years, Schumacher has developed a unique approach to the discipline of improvisation. He has collaborated with several pioneering artists, including Han Bennink, Katie Duck, Mary Oliver, Kirstie Simson, and Alex Waterman.
Michael Schumacher began dancing in musical theatre productions in his hometown of Lewiston, Idaho. After moving to New York, he received a B.F.A. in Dance from the Juilliard School. He currently resides in Amsterdam and conducts workshops in movement analysis and improvisation worldwide.