AUTOMAT
We don't practice, we record 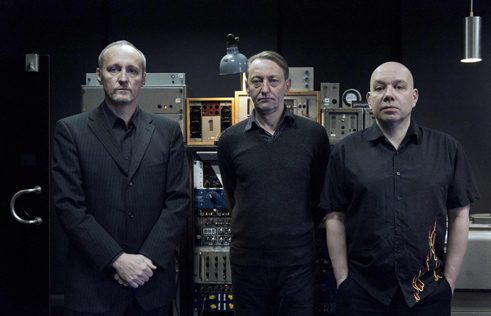 Jochen Arbeit has lived in Berlin since 1980 and was part of the artist movement Geniale Dilettanen. In 1983 he joined the influential band Die Haut, and since 1997 he has been an official member of well-known avant-garde noise band Einstürzende Neubauten.

Tell us about Automat. Who is in the band, what made you start it, and how do you approach composition and production?

Automat is a Berlin-based trio with the members Arbeit/Färber/Zeitblom. We started doing recordings for radio-plays. Our approach to recording and producing is to play live in the studio to electronic backings, which results in spontaneous composing, also called Improvisation. We don't practise, we record. And we mostly use first takes for the production. The last record Plus-Minus was recorded in three days, then a day of overdubs and then our producer shaped the whole thing together.

One of the main influences in the music of Automat is dub. Some say it is hard to ‘feel’ this kind of music for artists who do not have a reggae background. What is it about dub that attracts you?

Dub and Reggae have always been around me from early on. In my hometown I had a friend my age, eleven to twelve, early 70's, who got dub-plates via mail from London. This is where I heard dub for the first time. It was something completely different from what I had heard before. In the 1980s in Berlin punk and dub and old school Reggae were always close, you heard it in all clubs and bars combined with all the other stuff that was happening. So it follows me in life and through the work with Automat my interest is still growing.

Automat is primarily an instrumental band. However, your first album features three famous guest vocalists: Blixa Bargeld, Lydia Lunch and Genesis P-Orridge. In some publications these collaborations were summed up as 'a real Berlin affair'. Is Berlin still a fertile ground for artistic experiments, like in the 1980s?

No. It is a different city now. That Berlin does not exit any more. Although I think when you are young now you can still find this special dynamic of the city somewhere. But it is not so easy anymore to find places to try yourself and explore things. It is all commercialized now. In the 1980s nobody thought about making money from what you did, it was impossible. There was no market or playground for our art. Galleries were closed to us.We really had to invent everything on our own. I know for my work that this attitude of self-organisation is still the driving-force behind what I do and I hope it is still around to this day. It was always an artistic attitude and also became somewhat of a philosophy for me.

Creative processes and the audience

What Geniale Dilletanten did was perceived as bizarre and strange by your contemporaries. Many years later the Goethe-Institut is curating an exhibition and touring it around the world. How do audiences know if they are witnessing something that will still be relevant many years later?

I do not know. It is impossible to say what stays or not at the time you do it, especially when you are young, and we were all very young at the time. Also you never think about these things when you are doing them, you just have to give it a go and try your best. To think about the reception of an audience is not helpful at all in a creative process from my experience. But I have to admit that it feels a bit strange to become a historically relevant part of culture with the stuff I did a long time ago which was indeed strange and bizarre. Maybe you could say that we really were ahead of our time, which is always an important approach for music, art and everything.

Apart from your musical endeavors, you have been involved in experimental artistic practices such as dance and performance for a long time. Please tell us about these projects.

I have a production company called AADK with two performers/dancers. Abraham Hurtado is from Spain. Vania Rovisco from Portugal. They were members of the Meg Stuart Dance Company who started a residency at the Volkbühne in 2005. We met at night in bars and started asking questions about our work and soon found out that we share a common process in dance and music called improvisation. So we started to perform for hours in galleries and organised festivals over a period of seven years, without any support from anybody. This dynamic, the energy, the intensiveness of it reminded me a lot of what we did in the 1980's. It was really refreshing for me to find a different way of expression and work. They moved back to their home countries in 2012 - Abraham runs an art-center in Blanca, Spain, Vania curates and works in Lisbon, Portugal. We still meet often and work together. Apart from that, in the last ten years, I have written music for dance and performances whenever possible.