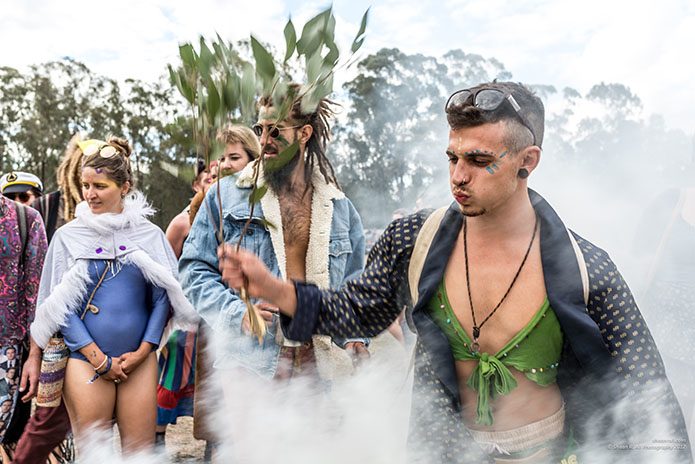 The evolution of bush doofs dates back to the early nineties. | © Shaan R. Ali Photography / www.shaanrali.com

Picture a scene where a fine, red dust rises and cloaks a pulsing crowd in a haze, as they stomp the ground rhythmically to ethereal electronic music. They are dancing on a clearing of land in the middle of the picturesque Australian bush, surrounded by scribbly gums, red soil and mountain ranges.

The image conjured up by the word ‘doof’ in Australia is far from its German connotations. Each year, Australia’s unique bush landscape plays host to a number of remote, electronic music festivals known colloquially as bush doofs, and these events inhabit a distinctive niche within Australia’s musical landscape. The name was fashioned in onomatopoeic reference to the repetitive bass (‘doof doof’) that is characteristic of the music, and the legitimacy of the term has since been cemented via an official listing in the Australian Oxford Dictionary. 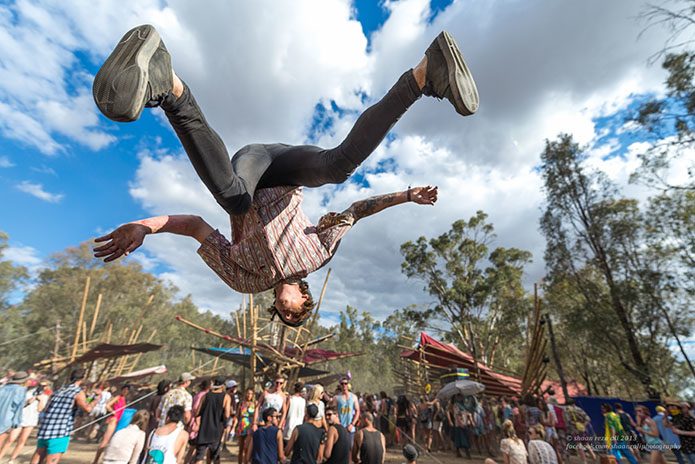 Bush doofs inhabit a distinctive niche within Australia’s musical landscape. | © Shaan R. Ali Photography / www.shaanrali.com According to organisers of a regular doof, Babylon Festival, doofs aim to promote an environment where festival-goers are “free of everyday pressure, judgement and limitations, surrounded by friends and likeminded futurists, artists and performers […] in the beautiful surrounds of the Australian countryside with soft earth under foot and constellations overhead.”

The evolution of bush doofs dates back to the early nineties; a revolutionary period for Australian electronic music. At the time, this new style of outdoor event was heralded as a solution to the waning popularity of raves in Sydney and other inner-city locations. Faced with the impositions of noise restrictions, contained environments and tightening regulatory controls in suburbia, party-goers began shunning urban raves in favour of open-air events which could provide the same freedoms as the formative days of rave.

Anna Habich and Jodie Taylor, co-publishers of a paper detailing the development of the doof scene in Australia, cite: “In contrast to many of the metropolitan raves and dance parties, the doof is conceived as a greater spiritual, and almost sacred, experience. Doofers seek a tribal encounter and boast a communal enlightenment, which often extends beyond the use of illicit drugs prevalent within urbanised raver practices.” 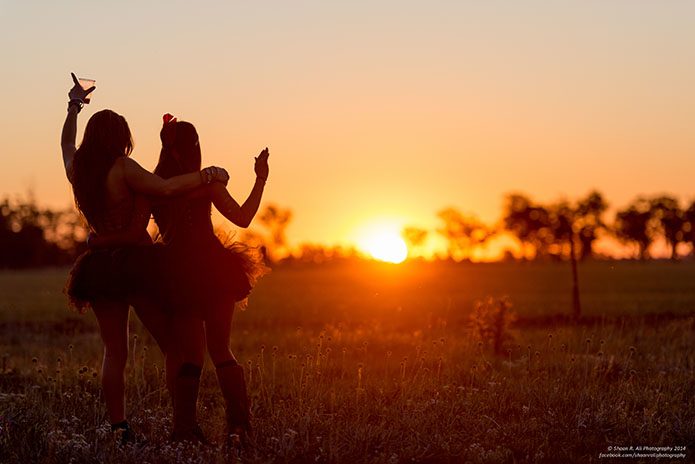 Doofers draw upon the landscape as a rich source of artistic inspiration. | © Shaan R. Ali Photography / www.shaanrali.com As the rave scene evolved, the increasing number of events being moved into the bush added a new dynamic to the experience. It was at this time that people began to see the festivals not only as a celebration of music and art, but also as a way of connecting with the natural environment in which they were held. Attendees were encouraged to nurture their surroundings, and to seek heightened states of bliss by deepening their spiritual connection with nature.

In order to evade regulation, bush doofs were held in isolated areas away from the city centre, and were not widely publicised. As a consequence, these gatherings lured an alternative crowd which belonged to various fringe scenes and shied away from mainstream culture. The events played host to environmentalists and political activists, artists, and those looking for a more spiritual experience than that offered by events taking place in warehouses or underground clubs.
Haebich and Taylor suggest that doofs stood against commercialism and middle-class overconsumption, and that, devoid of these unwanted influences, attendees were free to focus on forming connections with the surroundings and with other festival-goers.

EVOLUTION OF THE DOOF

Over the last twenty-five years, Australia’s doof scene has evolved into a thriving subculture.

Paul Abad, an event organiser who has been involved for over 15 years, attributes the success of the subculture to the sense of community it fosters: “For me, it's a social movement […] people who come to these events think differently and want a different world to what we have now, so they seek sanctuary in community events with like-minded people. With that in mind, they become spaces to develop a culture, explore new ideas and exercise our rights to gather peacefully for music, art and love.” 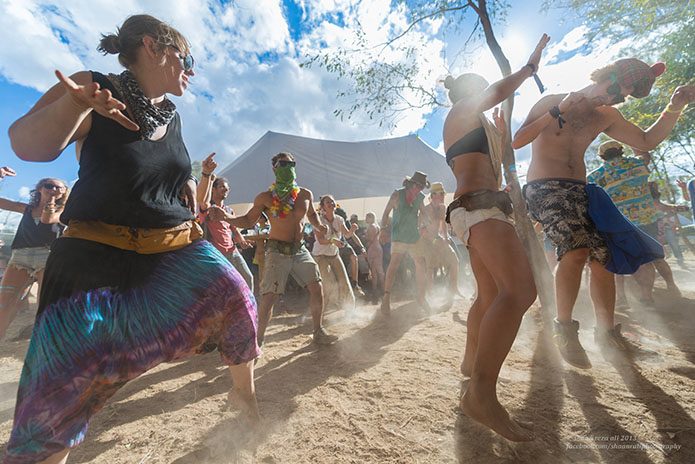 Earth Frequency, Rainbow Serpent, Babylon and Mushroom Valley represent just a few of the larger-scale festivals which now feature annually around the country. | © Shaan R. Ali Photography / www.shaanrali.com In an effort to draw attendees away from the concepts of cash and acquisition, organisers of some events mandate a moneyless economy, instead supporting the concept of gifting. Here, participants can bring along extra provisions to the event, and set up a small stall to offer their wares as gifts to fellow festival-goers. In return, the crowd is encouraged to take only what they need, and to give without expectation. The concept is grounded in sustainability, and hopes to strengthen feelings of bonding and group cohesion, to the exclusion of class.

Earth Frequency, Rainbow Serpent, Babylon and Mushroom Valley represent just a few of the larger-scale festivals which now feature annually around the country. In addition, there are many more intimate events held in parks or on private farmland; some of which are attended by as few as twenty or thirty enthusiasts who have made their way there via word-of-mouth. It is these events that are often viewed as a more authentic reincarnation of the scene’s beginnings.

Paul remains adamant that as bush doofs evolve, the spirit of inclusivity and connectedness between people from different walks of life remains. “Over time it becomes more diverse and more accessible, so we see a broader range of people attending.  Festival culture is booming world-wide, so (there are) always lots of travellers seeking the Australian festival experience, city people, hippies, doofers, clubbers. I think the diversity makes things more interesting.”

Perhaps it is the absence of urban conformity and the shared experience that allows revellers to connect with one another in ways they wouldn’t have otherwise. It is clear that doofers draw upon the landscape as a rich source of artistic inspiration, and embedded within the culture is a deep appreciation of the country’s vastness. This open space lends itself to musical escapism.