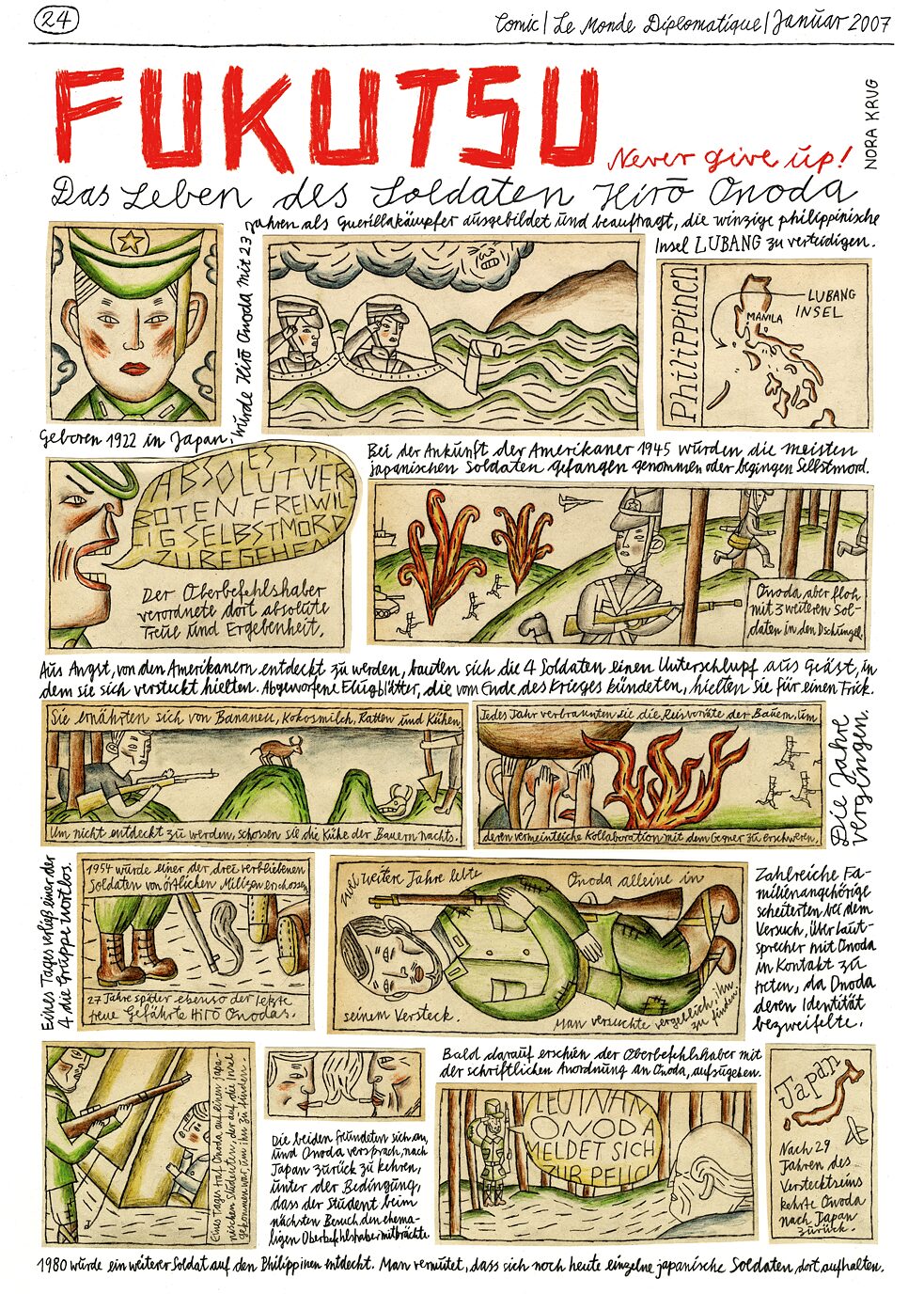 © Nora Krug / LE MONDE diplomatique
The Life of Soldier Hiro Onoda...Born 1922 in Japan, Hiro Onoda at the age of 23 was trained to be a guerrilla fighter and to defend the tiny Philippine island of LUBANG.

The commander-in-chief there decreed unfailing loyalty and devotion.

“It is absolutely forbidden to commit suicide out of your own free will.”

When the Americans arrived in 1945 most of the Japanese soldiers were taken prisoner or committed suicide. But Onoda with 3 other soldiers escaped into the jungle.

For fear of being found by the Americans the 4 soldiers built a hideout of branches for themselves. Airborne leaflets proclaiming the end of the war were taken for a ruse.

They fed on bananas, coconut juice, rats, and cows.
In order not to be discovered they killed the farmers’ cows at night.

Each year they burned the farmers’ rice stores
to deter them from collaboration with the enemy.

Years passed by.
One day one of the 4 left the group without a word.

For two more years Onoda lived in his hideout all by himself.
All attempts to find him were in vain.

Numerous family members failed to contact Onoda via loudspeakers because he doubted their identity.

One day Onoda bumped into a Japanese student who had come to the island to find him.
They became friends and Onoda promised to go back to Japan if the student on his next visit were accompanied by the former commander-in-chief.

Soon after the commander-in-chief showed up with a written order for Onoda to capitulate.

After 29 years in hiding Onoda returned to Japan.

1980 another soldier was found in the Philippines.
It is assumed that even today there are still some Japanese soldiers hiding.

Nora Krug
Nora Krug was born 1977 in Karlsruhe. In 2009, her book Red Riding Hood Redux was published by Bries. Since 2007 she has been working as a professor of illustration at the Parsons School for Design in New York, USA. In 2018 her book Heimat was published by Penguin Verlag (the English edition Belonging was published by Scribner). Nora Krug lives in New York.
nora-krug.com