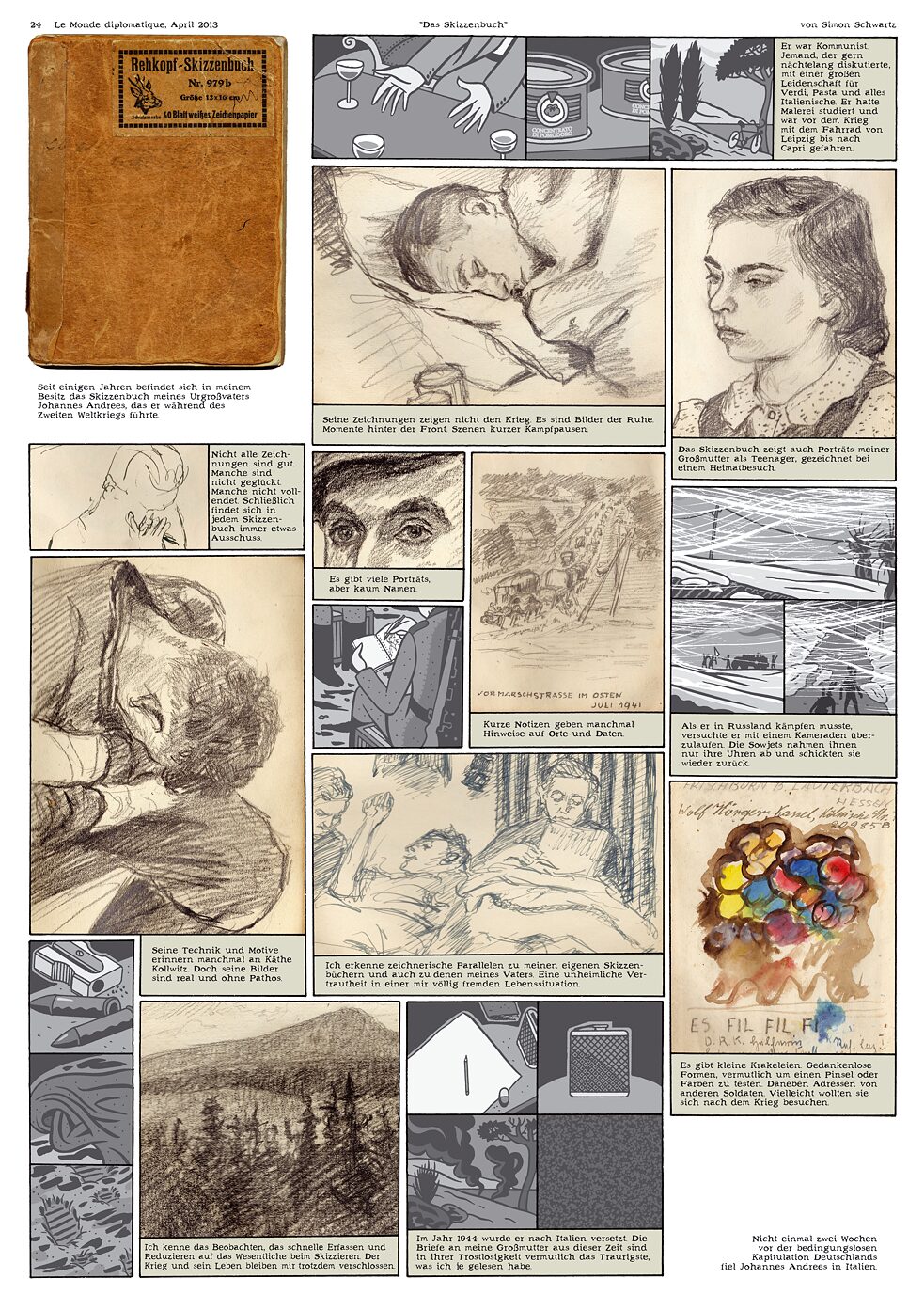 © Simon Schwartz / LE MONDE diplomatique
For some years I have had in my possession the sketchbook that my great-grandfather Johannes Andrees used during World War II.

He was a communist. He loved to debate until deep into the night and had a passion for Verdi, pasta,
and everything Italian. He had studied painting and before the war had travelled from Leipzig to Capri on a pushbike.

His drawings do not show the war. They are peaceful, picturing moments behind the front line. Scenes of short breaks in the battle.

The sketchbook also shows paintings of my grandmother as a teenager drawn while he was home on furlough.

Not all of the drawings are good. Some turned out badly. Some haven’t been completed. Every sketchbook contains failures.

There are many portraits but hardly a name. Sometimes short notes give an indication about place and time.
[Advance convoy in the East, July 1941]

When he had to fight in Russia, he and a comrade tried to defect. The Soviets only took away their watches and sent them back.

His technique and motifs are sometimes reminiscent of Käthe Kollwitz. But his pictures are real and without pathos.

I can see artistic parallels to my own sketchbooks and also to my fathers’. An uncanny familiarity with a situation completely alien to me.

There are small squiggles. Thoughtless figures, maybe trying a brush or colours. Addresses of other soldiers. Maybe they wanted to meet up after the war.

I know the observing, the quick grasp, and the reduction to essentials when sketching. War and the life that goes with it are still not accessible to me.

In 1944 he was transferred to Italy. The letters he wrote to my grandmother during this time in their bleakness are likely the saddest I ever read.

Less than two weeks before the unconditional capitulation of Germany Johannes Andrees was killed in action in Italy.

Simon Schwartz
Simon Schwartz was born in 1982 in Erfurt and grew up in Berlin-Kreuzberg. In 2004 he moved to Hamburg where he began studying illustration at the HAW. Five years later he graduated with his debut drüben!. This book has been awarded by ICOM Independent Comic Prize in 2010 and nominated for the German Youth Literature Prize. 2012 is graphic novel Packeis won the Max und Moritz Prize.
simon-schwartz.com