Josie used to call it our “office” 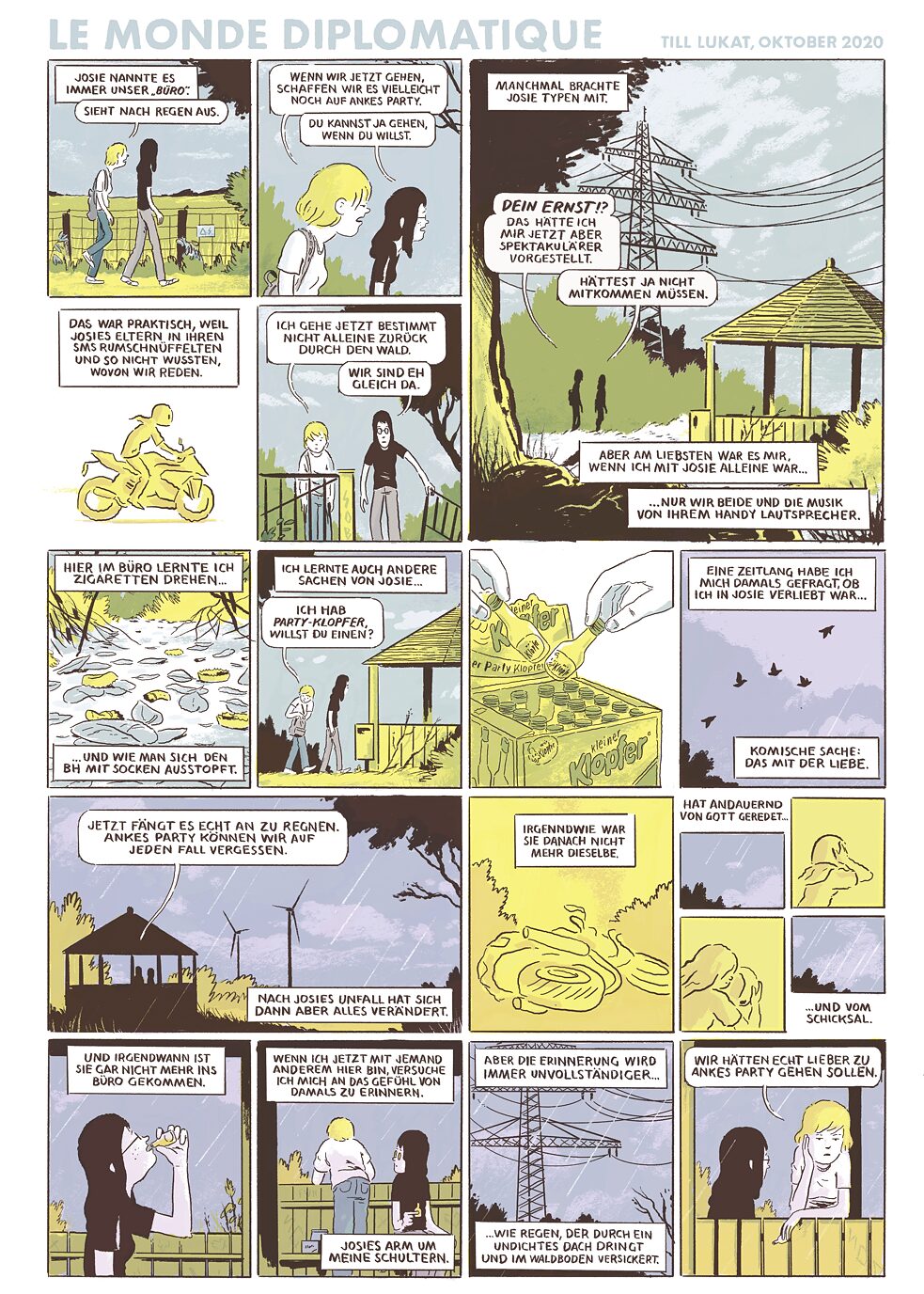 © Till Lukat / LE MONDE diplomatique
Josie used to call it our “office”.

If we start walking now, we might still make it to Anke’s party.

Feel free to go if you want to.

Sometimes Josie used to bring some guys along.

Is that it!? I was expecting something a bit more spectacular.

No-one forced you to come along.

But it was best of all when it was just Josie and me ...

... just the two of us, and the music from the loudspeaker of her mobile.

It worked really well, because Josie’s parents always had their noses in their phones, reading their text messages.

There’s no way I am going to walk back through the forest on my own.

We’re just about there now.

It was here in the office that I learned to roll cigarettes ...

... and how to stuff socks down your bra.

And I learned other things from Josie as well ...

I’ve got some party shots with me, would you like one?

For a while I wondered if I was in love with Josie ...

but love’s a funny thing.

It’s really starting to rain now. One thing’s for sure, we can forget about Anke’s party.

But after Josie’s accident everything changed.

Somehow she wasn’t the same any more.

She started talking about God all the time ...

And then one day she stopped coming to the office.

When I’m here with someone else I try to remember how it used to feel.

With Josie’s arm around my shoulders. But the memories are starting to ebb away ...

...like rain leaking through the roof and soaking into the ground.

We definitely should have gone to Anke’s party.

Till Lukat
Till Lukat is a comic artist from Berlin, Germany. He is the author of the „Dures a Quire“ Comic Lexicons that introduce outstanding historical characters and the graphic novel „Kondensstreifen im Kopf“, a sensitive coming-of-age story following the life of its teenage protagonist. He also wrote a number of short stories for publications such as Stripburger, kuš!, Strapazin, and many more. In 2019 he worked together with the European Research Council on a webcomic about Crystallography and the beginning of life on this planet and in 2020 he moved to England.
lukat-land.de