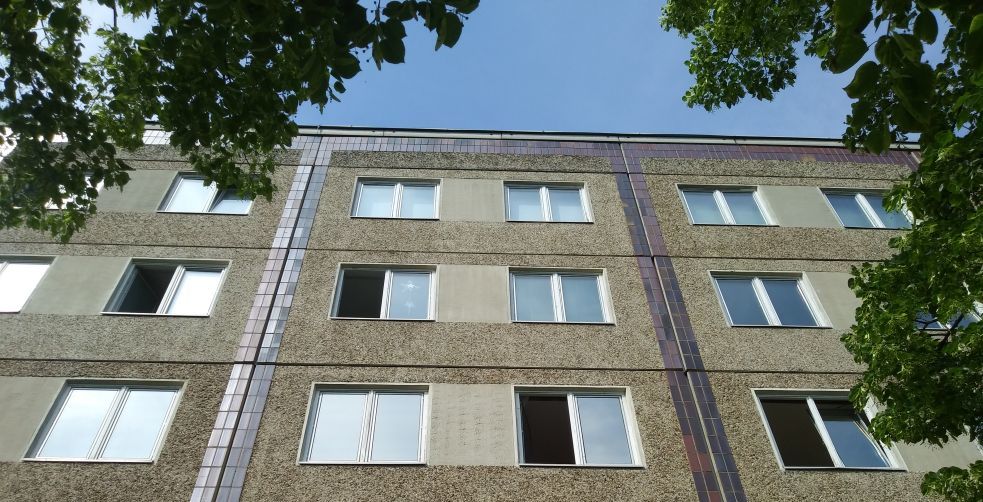 Once a year I’m invited to attend a meeting of all the flat owners in my building. Many of the attendees are owner-occupiers like me. Unlike me, a large number of them are (former) East Germans over the age of 60. This annual ritual provides an interesting snapshot of the people living behind the concrete facades of our Plattenbau and a chance to witness micro-scale German bureaucracy in action. It’s also a platform for airing residential gripes and grievances. This year, dog owners were in for a roasting and I was reminded of the holy status of the Mittagsruhe.

We take our seats around a rectangle of tables in the office of the property management firm, silently sizing each other up and bracing ourselves for two hours of legalese. The chairman reads out the formal greeting and announces we have a quorum. This is good news—no need to reschedule. Then the voting begins...

We vote about approving the 2018 annual financial statement . We vote about accepting the 2020 economic plan. We hold a vote to relieve the administrative advisory committee of their duties. And a vote to reinstate exactly the same three people. This appears to be something of an annual tradition and reminds me of the immortal words of Miss Sophie in Dinner for One: “The same procedure as every year, James!”

Everyone knows the script: the committee is officially discharged, then there’s a moment of awkwardness and efforts to avoid eye contact with the chairman, who half-heartedly fishes for potential candidates before proposing that last year’s committee might like to carry on for another year. There is no visible enthusiasm from the three senior citizens, but also no complaints. The incumbents are reinstated in a landslide victory.

Signing the sales contract for my flat in 2017. | ©Brianna Summers Next up, more voting. We vote about changing a rule regarding the costs involved in the notarisation of signatures provided by the property management firm that are required if a flat in our building is sold. Eyes glaze over. Someone coughs.
Moving right along. Now we’re voting about smoke detectors. An incoming state law dictates that a coordinated system of smoke detectors must be installed in the flats of all residential buildings. (Wait, that’s not already a thing?) The chairperson presents three different tenders and makes the case for his firm’s chosen contractor. A hostel-owner who knows his way around fire safety regulations pipes up, suggesting there are cheaper and simpler alternatives. There is some interest in his suggestion, however adding a fourth tender to the vote would mean holding an additional owners meeting and no one wants that. The motion passes.

Things get loose once it’s time for Other Business. A woman in her 40s with spiky purple hair launches a tirade about the drilling noise that has been disturbing her at “irregular intervals”. She is particularly distressed by the culprit’s disregard for the Mittagsruhe rule, which is hampering her ability to take afternoon naps. (Our building’s “quiet time” rules forbid noisy activities between 1:00pm – 3:00pm and 10:00pm – 7:00am.) Following her metaphorical mic drop, a young couple out themselves as the reckless renovators, apologising to the aggrieved napper and diplomatically explaining that they are doing their best to drill at the least annoying times. This awkward confrontation is somehow compelling yet also Fremdscham-inducing. (Fremdscham is one of my favourite German words: it describes the feeling of being embarrassed on behalf of someone else).

But the real hot topic this year is dogs, not drills. Apparently, rogue foreign tenants have been letting their massive dogs roam around unleashed to freely soil the courtyard behind our building with their unsightly turds. This is clearly forbidden by an official letter pinned to the communal notice board, but as one particularly irate owner points out, some of the residents can’t even speak German! She had attempted to admonish the owner of a free-range dog and became incensed when he could only respond in English. 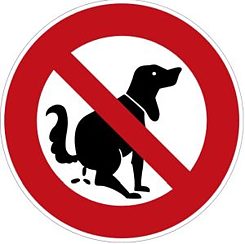 Proposed pictogram to prevent errant dog turds. | ©Wikimedia Commons
“I think it would be a good idea to put up that sign in English as well,” says a member of the administrative advisory committee.

“Or maybe just signs without language, like a picture of a dog poo with a line through it?” suggests someone else.

“I don’t want the entrance to my building filled with pictograms of dog’s muck” chimes in the hostel owner.

It quickly becomes clear that several of the owners have spied this non-German-speaking dog owner through chinks in their curtains or passed him and his hound in the stairwell. The meeting descends into a chorus of complaints and dubious claims:
“I think he has at least four dogs!”

“The dog I saw was massive, about this high!”

“It’s just not right, some of the older ladies don’t feel safe going into the courtyard anymore.”

The cacophony of voices eventually peters out as people realise they’d actually quite like to go home now. No resolution is passed regarding the foreigner and his herd of colossal canines. Presumably dog poo will be at the top of the agenda at next year’s meeting.