In 2020 there were almost 26 million pigs living in Germany. These four-legged omnivores are not only omnipresent on menus throughout the country, they have also influenced German culture and language. Here are some of the many ways in which Germans eat pork and talk pig.

Pigs are farmed and eaten all around the world. In some cultures they are symbols of good luck and prosperity, while others consider pigs greedy or impure. More often than not, they’re simply viewed as an alternative to chicken or beef. Yet in Germany, pigs have successfully infiltrated the culture, diet and language to an astonishing extent. It’s hard to say exactly when this porcine love affair began, but it’s certainly an enduring romance.

Stuttgart is home to the world’s largest pig museum and the city of Wittlich hosts a Pig Festival every year, where more than 100 pigs are spit roasted over four days. Germans use pork to make all kinds of sausages, roasts and stews, as well as delicacies such as the pickled ham hock known as Eisbein (ice leg) or the equally as appetising Saumagen (sow stomach). Saumagen involves cooking pork inside a pig’s stomach and, fittingly, is also an idiomatic expression used to describe someone with an iron stomach. 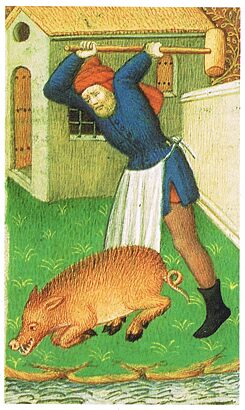 Medieval pig slaughter | Credit: Wikimedia Commons / British Library, London While Australia may be the world’s second largest consumer of meat per capita (average of 92 kg per person in 2018), Germany is a heavy hitter in the pork stakes. According to Statista, Australians ate just under 21 kg of pork per person in 2017, while the average German ate around 35 kg of piggy products annually between 2017-2019. During that period, more than half of all the animal protein consumed in Germany was pork. (Chicken came in at number two with only around 12 kg.)

A pig by any other name


Supporting this diet requires a lot of pig farming, both historically and today. This is probably why cities and towns throughout the country sport names like Schweinersdorf (pig village), Schweinthal (pig valley), Schweinsmühle (pig mill), Schweinlang (pig long) and Schweinfurt (pig ford).

Pigs can also be found in people’s surnames, most notably the former German footballer Bastian Schweinsteiger. Schwein equals pig and the verb steigen can mean ‘to climb’. Assuming his name is derived from a profession—like Miller, Baker or Shepherd—does this mean that, historically, it was someone’s job to climb pigs? Or encourage pigs to climb? The ‘pig climber’ conundrum kept me occupied during many World Cup football games until I realised that Steiger is an overseer, meaning that one of Bastian’s forefathers was most likely the head honcho at a hog farm. Mr Pigoverseer may not be the most flattering name in English, but it still has some dignity, unlike Schweinsteiger’s nickname ‘Schweini’, which translates to the even less appealing ‘piggy’. 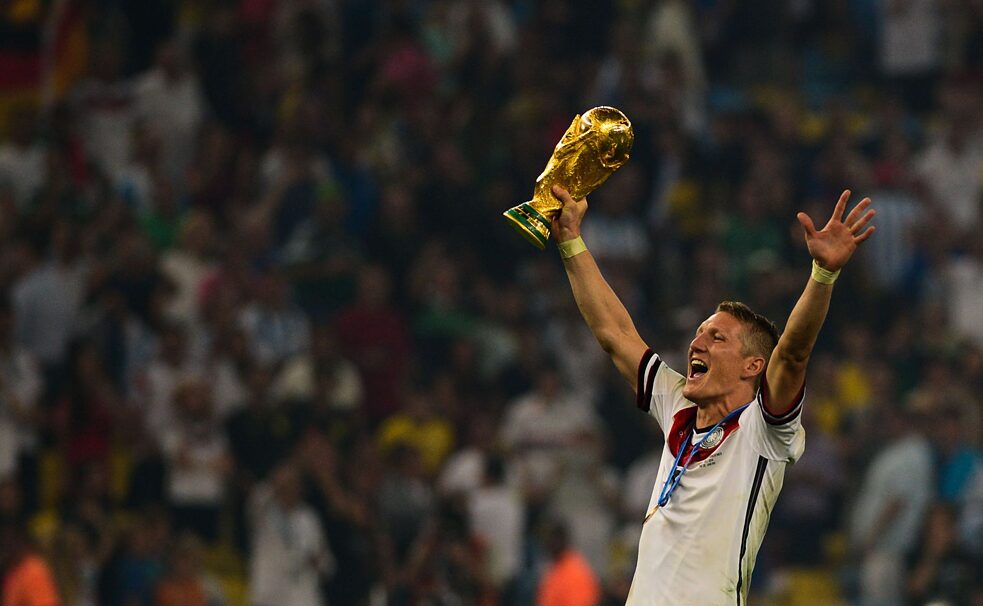 
The influence of pigs on German culture is showcased to great comic effect in the vernacular. German has dozens of idiomatic expressions that involve pigs or sows. The word Schwein is sometimes used instead of “someone” or “no one”, as in Das kann kein Schwein lesen (no pig can read that, i.e. no one can read that / that’s illegible). While we’re on the subject, illegible handwriting can be referred to as Sauklaue (pig’s trotter). So by that logic, scrawled text is both written by a pig and completely unintelligible to pigs. Got it.

While Australians enjoy using swear words to intensify their adjectives, Germans commonly use sow as an intensifier: e.g. saugut (sow good) or saudoof (sow stupid). I first heard this usage courtesy of a radio advertisement targeting price-conscious shoppers, which repeatedly shouted “Sau, sau sau…saubillig! Und noch viel mehr!”. I assumed this was just a weird way of pronouncing “so cheap” until I saw a corresponding billboard featuring a piglet.

Another of my early encounters with the world of pig idioms was the German equivalent of the old adage “blue and green should never be seen”: Grün und blau schmückt die Sau. For years I understood this to mean “green and blue is the jewellery of a pig” until I realised that schmücken probably refers to the way the pig choses to decorate itself rather than its choice of earrings. (I still prefer my original interpretation.)

To be fair, English-speakers have come up with their share of pig sayings too. We are as happy as pigs in mud, like to go the whole hog, sweat like pigs and believe superficial improvements are akin to putting lipstick on a pig. There are also some overlaps between English and German on this score. Pigs help us to express disbelief, albeit in different ways. An Australian might say “yeah and pigs might fly”, whereas Germans exclaim “I think my pig is whistling!” In both languages a glutton is said to eat like a pig, someone who is nasty can be called a pig and a big mess is described as a pig sty or piggery. But that’s where the similarities end and Germany’s pig idiom juggernaut really picks up steam… 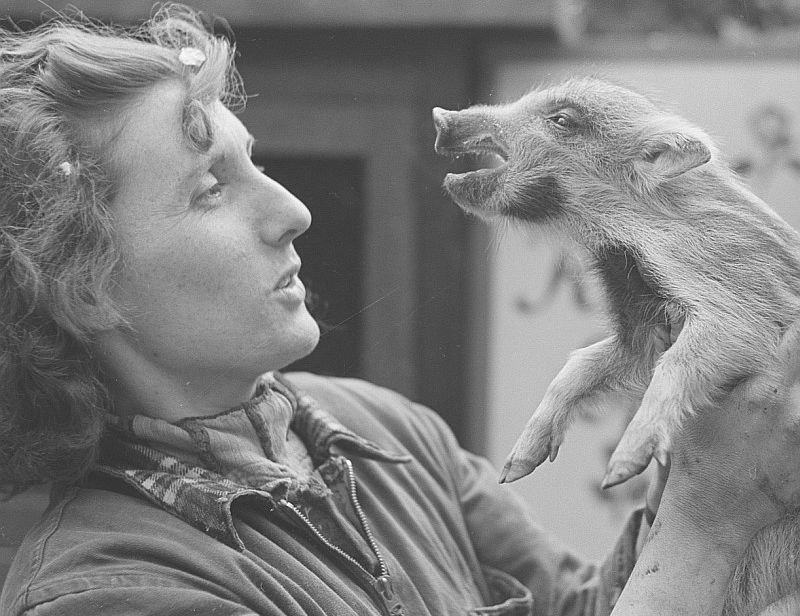 A vet talks to a piglet in Leipzig in 1951. | Credit: Wikimedia Commons / Deutsche Fotothek

It's a pig's life


In Germany, if you’re at work and accidentally slaughter the wrong pig (make a mistake) and the result is below all sow (truly awful), your boss might sympathise with you by calling you a poor pig (poor sod). But if your boss is a sow bloke (despicable person) and you work in a sow shop (badly run company), they might make you into a sow instead (berate you). Perhaps there really was no excuse for your mistake, given that a blind pig could see what you should have done (it is obvious to everyone). Either way, the dressing down from your boss has triggered your inner pigdog (negative self-talk) and soon you’re in a sow mood (grumpy). To top it all off, there’s sow weather (bad weather) outside. But at least you had pig (a stroke of luck) and could borrow your colleague’s umbrella. Perhaps you should quit your job? After all, it is pig work (difficult work) and you’d much rather release the pig (go wild, live life to the full).

After work, you arrive home and see your son glued to his phone, like a sow crouching on an apple tree (with poor posture). Maybe he’s on social media, herding a sow through the village (causing a stir with a piece of news or gossip). Meanwhile your daughter is dressed up like a pirate and running around like a singed pig (maniac). Oh well, you think, I was probably like that at their age. After all, piglets learn how to grunt from the sow (the apple doesn’t fall far from the tree).