A personalised concert idea that started in Germany in mid-2019 has boomed since the worldwide spread of Coronavirus. Flautist Sally Walker, who has been organising the Australian set of performances, tells Goethe-Institut what it’s all about and how it’s helping struggling musicians.

Australian musician Sally Walker spent 10 years in Germany, living in Cologne and Leipzig and starring with some of Germany’s finest orchestras. She probably never thought that her connection to the country would end up playing an important part in navigating her way through COVID-19 this year.

But after connecting with a former German colleague on Facebook, the flute player set up 1:1 Concerts in Australia, a unique idea where a single musician plays a private concert for a single listener in a non-traditional setting. Not only is it COVID-safe in a way that normal concerts can’t be at the moment, listeners report that it is a deeply moving experience. 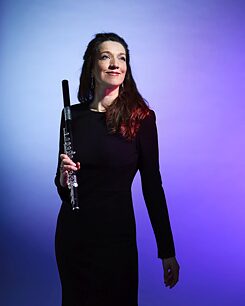 In fact, since starting the series in Germany mid-way through last year, the 1:1 Concerts idea has moved around the globe like “a positive virus” from France to India, from the USA to Japan. The money raised from the concerts, which is gathered via donation, goes towards helping struggling musicians in the various countries.

Sally Walker spoke to Goethe-Institut Australia’s online editor André Leslie about the concept and how it came about.

Where did the idea for the 1:1 Concerts come from?

The idea stems from the great Serbian performance artist, Marina Abramović, specifically her ideas about human connection and the sacredness of the human experience, in a project called A different way of hearing at the Alte Oper in Frankfurt. In that project, Christian Siegmund, who is one of the three 1:1 Concerts initiators, was assisting her, so he had a close contact with her philosophical and artistic ideas.

The three German initiators are a flute player, Stephanie Winker, a scenographer called Franziska Ritter and Christian Siegmund. The three of them devised this formula for one to one concerts: a 10 minute concert experience, one musician, one listener, in a non-traditional concert space marked by a rectangle. It was a way of bringing the sacred back into music in live performance. They started this in a festival in Volkenroda in Thüringen in the 2019 European summer, before the pandemic. Then, when the pandemic hit, this was a COVID-safe concert enabling people to have an experience of live music, throughout the pandemic. It boomed internationally, they like to say that it spread like ‘a positive virus’ - a virus of goodness, to compound the other virus we are all hoping will go away. They found that it had a very powerful effect on the listeners, because they don’t feel observed. The concerts have no ticket price so listeners are encouraged to make a donation to support out-of-work musicians. In their case it’s the German Orchestral Musicians Fund, in Australia it’s Freelance Artists Relief Australia (FARA), founded by soprano Nicole Car. 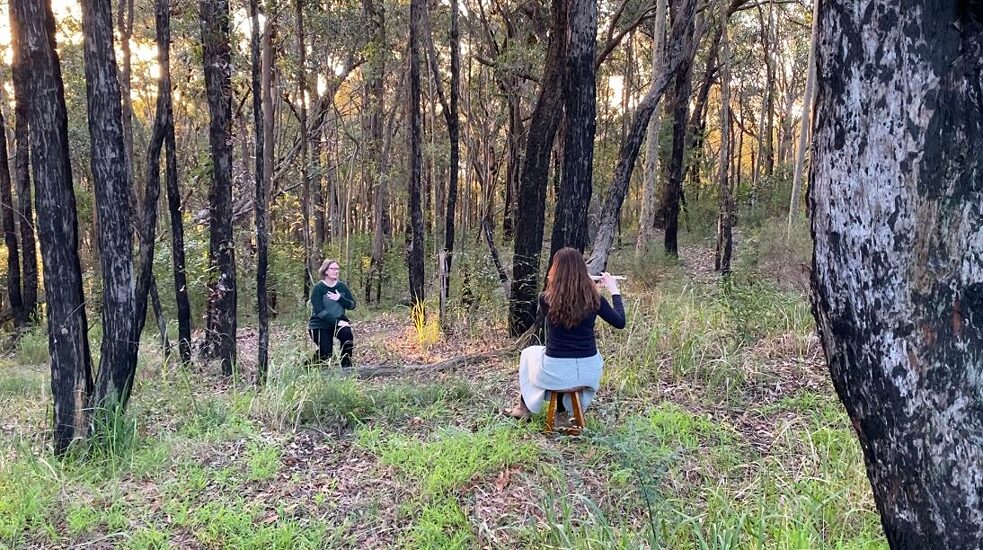 Music performances in nature are part of the appeal of the 1:1 Concerts | Photo credit: Greg Kerr What are the concerts aiming to achieve more broadly?

The FARA at the moment is really just keeping musicians alive. It’s about emergency funding for food and rent because it’s been 8 months for a lot of freelance performers, with no income at all. So things are quite dire for a lot of them. Rather than just asking for a donation from someone we are trying to give them a really special experience, that’s also reclaiming this audience-performer nexus that we have of course lost, through screens.

Aside from the one-to-one nature of these concerts, how else are they different?

The person books online for a time and a place. The host meets them outside the concert venue and allows them to have some quiet time by themselves, to be really psychologically prepared in a way that we perhaps don’t otherwise manage, when we meet friends for a normal concert and dash inside last minute. This is really a different, spiritual setup.

There are the two chairs waiting in the concert space with the musician sitting on one and the listener takes the other chair. Then comes one minute of eye contact. In this minute the performer is trying to think of the right program for that listener at that moment in time, never to be repeated. The listener in that minute is taking in the surroundings, which are often optically beautiful or interesting, and also who their musician is and also settling in to the giving and taking, the communication that is happening without words between the musician and listener. Then the musician makes his or her choice and will play for the next nine minutes - sometimes one long piece, sometimes two or three shorter pieces or songs.  At the end there is brief eye contact again and the host comes into the space and takes the listener out.  The listener is then given a form to fill out, where they can write what they would like to say to their musician and that is always very, very rewarding. At the same time, the musician is writing down the pieces that were chosen for this particular listener on a form, which also has the details about how to donate. Then the host exchanges those two forms and that’s the end of the concert experience. 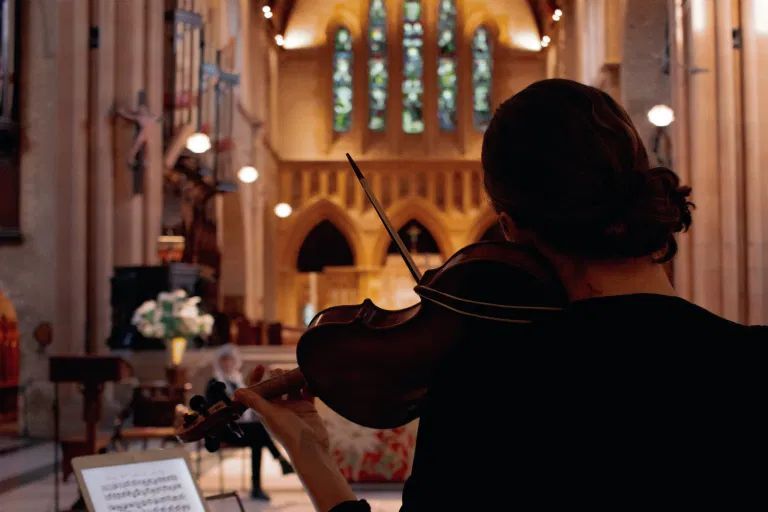 Baroque violinist Simone Slattery puts on a performance at Christ Church Cathedral in Newcastle | Photo credit: Jen Hankin
Why has it been such a success here and around the world do you think?

I think it’s a concert for our time. People feel vulnerable at the moment and this concert model is just about one listener and one musician, sharing this very intimate and in some cases profound experience. We’ve already taken a waiting list for next year. I think once word got around a lot of people thought this would be a really lovely gift. I think people are not in the mood to give things at the moment. People want something that is going to make them feel better. I would say that 90% of our bookings at the moment are bookings for other people. It’s quite noticeable. It’s a lovely gift to give.

What do the artists involved in it say about the experience?

They find it very meaningful. They find it quite emotional to actually play for one person again, where you can actually watch the response, where you can watch what you are putting out in your musical idea, mirrored on the face of someone that is sitting two metres away from you. It’s really powerful. When we are on stage, you do get the vibe of whether an audience is connected or whether you have lost them. But you do not have the feeling of caring very intensely for one person for 10 minutes.

For us, it’s also a stepping back from performance anxiety. In a big hall there are going to be supporters, but there’s probably going to be reviewers there and maybe your students are turning up too. You feel that you really have to play very, very well. Whereas in a concert like this, your aim is to connect: to move someone, to give them a really good experience. It’s actually all about the listener and not about the performer. For some of our more anxious performers I think they have really, really benefited from just reconnecting to the spirit and the essence of the music without the feeling of needing to be judged. It’s mutual non-judgment. The listener is not judged if they are crying, which most people do by the way. They’re free to do that. For us, if we’re playing something and there might be a small slip, there’s not a feeling that it might be in the newspaper.

For more information about the upcoming 1:1 Concert performances in Australia, click here.