© And Tomorrow the Entire World

After premiering in competition at the 2020 Venice Film Festival, a gripping Julia von Heinz-directed political thriller is Germany’s submission for the Best International Feature Film category at the upcoming Academy Awards — and it’s a complicated and absorbing film with a strong sense of timeliness.

“Those who cannot remember the past are condemned to repeat it,” the aphorism ascribed to George Santayana, instantly springs to mind when playing tourist in Berlin. Neither the German city nor Germany as a whole has forgotten that fascism changed the course not only of their history, but also of the modern world. Reminders sit in spots obvious and everyday — in memorials dedicated to the Second World War, in ordinary attractions and on the street — and the effect is striking. The atrocities of the past aren’t washed over and ignored here, but recalled again and again, because doing so is one possible way of trying to ensure that they don’t recur. Accordingly, at a time when fascist and far-right ideology is regaining prominence in Europe and elsewhere, And Tomorrow the Entire World (German title: Und morgen die ganze Welt) is exactly the type of movie that German cinema was always likely to deliver, with writer/director Julia von Heinz stepping inside the anti-fascist fight from the perspective of a 20-year-old law student and newcomer to the cause.

The 2020 Venice Film Festival-premiering feature isn’t set in Berlin, but in Mannheim — and while the choice of city mightn’t seem all that relevant, opting for a less-globally recognisable locale helps hammer home the idea that fascism can and does spring anywhere. That concept finds a parallel in the journey of And Tomorrow the Entire World’s protagonist Luisa (Mala Emde), because people passionate about stopping racist terror and its associated violence and attacks can and do hail from anywhere as well. The latter should arise everywhere, of course; however, in the film, Luisa comes from a comfort family and life. She isn’t just looking for a reason to rebel, though. As the neo-Nazi movement begins to make its presence known in her orbit, she’s deeply driven to act. Moving into the social commune where her high school best friend Batte (Luisa-Céline Gaffron) lives and debating the German constitution in her university classes is the first step. To her pal’s dismay, following the group’s handsome leader Alfa (Noah Saavedra) and his offsider Lenor (Tonio Schneider) in fighting violence with violence comes next. 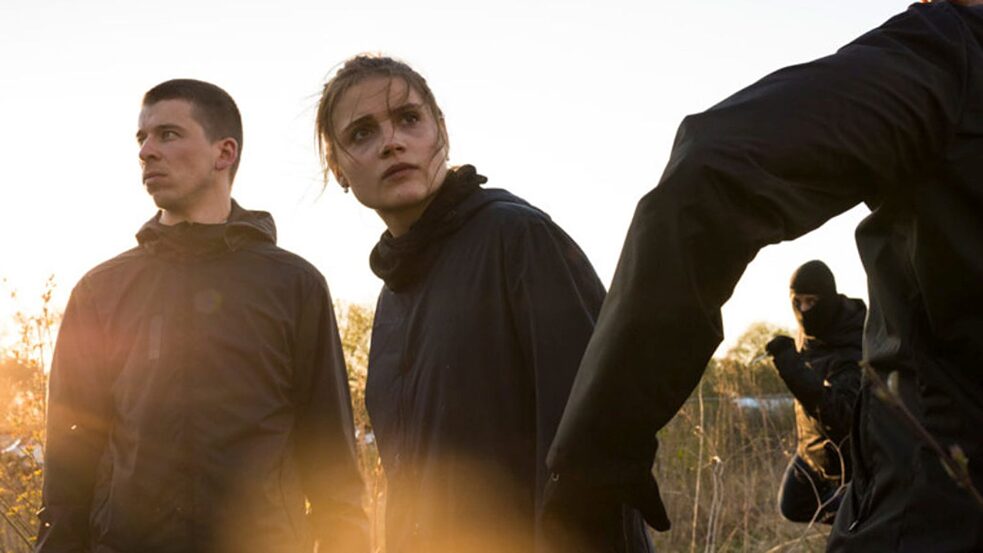 
There’s no doubting where And Tomorrow the Entire World, filmmaker von Heinz and her co-writer John Quester sit regarding battling right-wing terror. That said, this isn’t a simplistic film that tasks a wide-eyed idealist with adopting a noble cause and rightly emerging victorious. Such an easy and straightforward story that states the self-evident — that fascism is bad and opposing it is necessary — serves no one, because it’s as obvious as saying that the sky is blue. How left-wing activists can effectively crusade for their cause, the methods they choose, the impact those options have and how (if at all) the fight has changed in recent decades are all in far greater need of contemplation and dissection. So is the influence that their quest has on their lives in a broader sense, and vice versa. Luisa navigates all of the above, especially as it becomes clear that her genuine desire to combat fascism is complicated by her attraction to the headstrong Alfa and, as a result, that her brain and moral compass aren’t necessarily the only internal forces guiding her decisions.

Again, von Heinz and Quester don’t ever strip their story down to its most straightforward parts — so this isn’t a mere tale about a girl following the guy that she’s infatuated with into an antifa collective, either. Rather, And Tomorrow the Entire World hinges on complexity on multiple levels, expressing just how difficult that something as clear-cut as rallying against hatred and advocating for a better world can prove. For Luisa, Alfa, Lenor and their fellow commune members, the situation gets murkier when their efforts to invade a far-right demonstration see them end up in possession of a mobile phone belonging to one of the neo-Nazis. From there, they disrupt other rallies, damage cars, infiltrate the fascist group’s fenced-in base and, after taking drastic action to counter a drastic threat, find themselves in increasingly difficult circumstances. When they seek refuge with Dietmar (Andreas Lust), who stood in their shoes decades earlier, And Tomorrow the Entire World provides historical context for their fight; they’re not the first, nor will they be the last, to grapple in such a scenario, and just how little has changed understandably troubles their elder companion.


A strong sense of timeliness


And Tomorrow the Entire World brims with passion — for Luisa’s quest, as tangled as it becomes, and for the overall anti-fascist battle that she’s a part of. It gives that passion a visual outlet, via the film’s constantly moving, bobbing, weaving and roaming cinematography, which repeatedly and purposefully evokes the urgency felt by its characters. And that urgency helps emphasise the movie’s timeliness. It’s impossible to miss that this is a contemporary-set feature releasing in a world where the events depicted aren’t just relegate to the realm of fiction, but von Heinz ensures that And Tomorrow the Entire World hits home in every directorial choice. The frequent decision to peer closely at the expressive Emde’s face, the pacy editing that adds as much tension and suspense as cinematographer Daniela Knapp’s lensing, the naturalistic performances wrangled out of the entire cast — they all contribute to a potent, absorbing and affecting movie that’s inherently tense by virtue of its premise, but also feels unshakeably, viscerally topical and of the moment as well. It may be a little heavy-handed at times, but it’s always apparent that that comes with the territory.

There is never a bad time to espouse the need to counteract fascism, and to examine the complications involved, but just how relevant that notion is at present echoes in And Tomorrow the Entire World. It’s also likely to help the film reach audiences. Already, over Christian Petzold’s Berlinale-premiering Undine, the movie has been chosen to represent Germany in the Best International Feature Film category at the upcoming Oscars. The Academy of Motion Picture Arts and Sciences hasn’t yet revealed the full list of titles competing for the field, after submissions closed on December 1. The short-listed ten movies won’t be announced until February 2021, the nominations until March and the winner until the end of April. But And Tomorrow the Entire World is a worthy contender and, thanks to the weight of its subject matter, the determination with which it interrogates such an important topic and the gripping manner in which von Heinz brings such a blistering tale to the screen, a particularly resonant one as well.