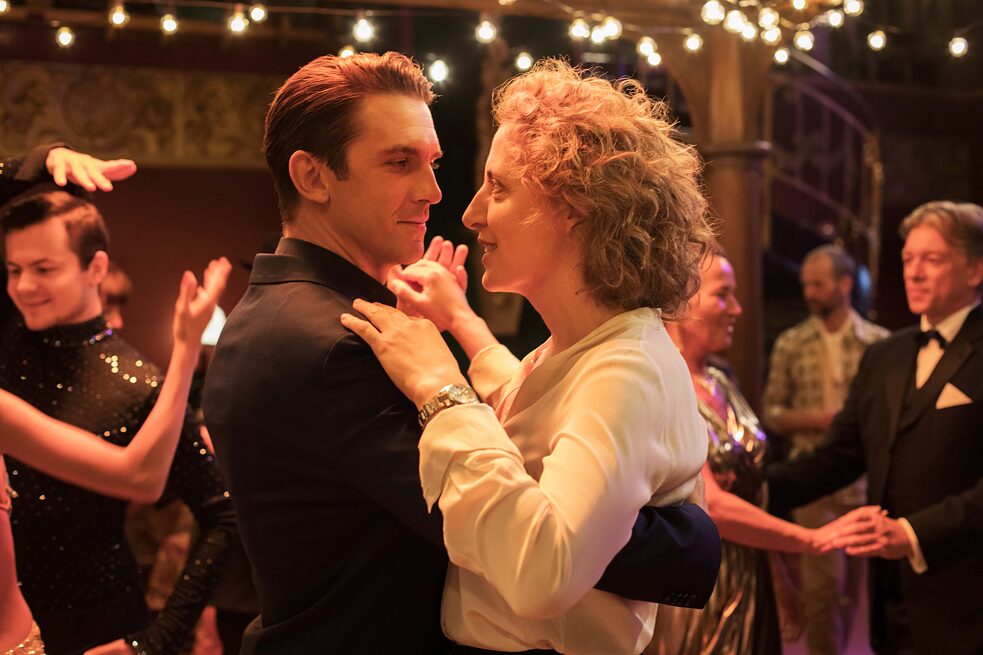 Sixteen years have passed Germany last won the Academy Award for Best International Feature Film, and it won’t take home the Oscar in 2022. Shortlisted but not nominated, Maria Schrader’s I’m Your Man would’ve been a spectacular winner, however — and, while this smart, savvy and humorous sci-fi romance speaks for itself, Schrader also chats with us about its stellar concept and casting.

If an algorithm could predict the winner of the Oscar for Best International Feature Film, it’d be unlikely to pick I’m Your Man. The Academy Awards itself won’t, after placing Maria Schrader’s sci-fi romance on its 15-feature shortlist for its 2022 ceremony, but failing to nominate it among the final contenders for the category’s shiny statuette.

On paper, it’s easy to see why; romantic comedies about women who date robots aren’t typical Oscar fodder — neither in the main fields, with their heavy skew towards English-speaking and American-made films, nor when specifically highlighting cinema from the rest of the world. But, although five impressive features now vie for the gong, I’m Your Man would’ve been a deserving recipient. Movies that so astutely interrogate societal norms around relationships and gender roles, and so insightfully explore artificial intelligence, humanity’s reliance upon technology, and what it truly means to connect in these always-online times, are rare in every language.

Schrader’s first purely German-language project as a director — after starting her career on-screen, including recent roles in Deutschland 83, Deutschland 86 and Deutschland 89; making her helming debut with 2007’s Love Life; and winning an Emmy for Netflix miniseries Unorthodox — I’m Your Man isn’t an average sci-fi rom-com (if such a thing even exists). It isn’t a formulaic entry into either genre, either, or a standard look at AI, our possible future or relationships. Protagonist Alma (Maren Eggert) is an archaeologist at Berlin’s Pergamon Museum, and she’s accustomed to examining how humankind has evolved over time, or hasn’t. Accordingly, she takes to her android date, Tom (Dan Stevens), like she’s participating in an experiment. She is, but she also can’t help responding emotionally to his presence, to what it means to have him around, and to the way he’s wired to truly accept her for who she is. Girl meets robot boy, they connect, sparks fly: that’s still the underlying blueprint, but I’m Your Man ruminates deeply about its complicated setup and corresponding implications. 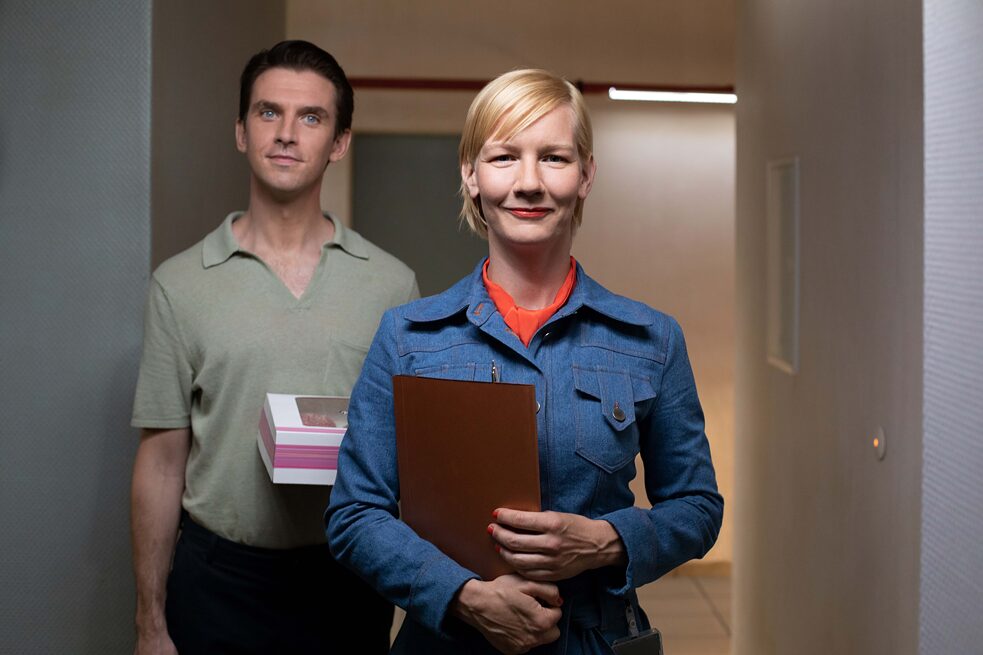 Protagonist Alma (Maren Eggert) | © Palace Films Eggert was a worthy winner of Berlinale 2021’s Silver Bear for lead performance, playing her part as thoughtfully as Schrader crafts the entire feature; a girl standing in front of a robot waiting for it to love her, she firmly isn’t. Known for everything from The Guest and Downton Abbey to Legion and Eurovision Song Contest: The Story of Fire Saga, Stevens is equally as effective and affecting as Tom, both comically and cleverly so — playing a robot who has been specifically designed to be Alma’s perfect romantic partner, but whose impact runs far deeper than circuitry. Their performances are ideally pitched to ensure that I’m Your Man unpacks a fairy tale fantasy with smarts and humour, and with understanding and melancholy as well. If this is a potential vision of what may come, Schrader ponders if it’s really what we want, and why, and whether the bonds humanity perennially seeks — the answer to loneliness, and to understanding ourselves also — can ever be programmed.

Charming, intelligent, amusing, savvy: I’m Your Man sports all these traits, as Tom does. Indeed, if the forces behind Alma’s robotic date — personified by Sandra Huller in an influential supporting role — was to make a movie, it’d dream of a result this perceptive and delightful. Speaking about the film, Schrader is equally canny; like director, like picture. Her feature won’t receive an Oscar, but it easily wins hearts and minds, including via its sharp approach to its concept and sublime casting.

I’m Your Man springs from Emma Braslavsky’s short story Ich bin dein Mensch, but simply bringing that tale to the screen was never Schrader’s task. Asked the obvious question — why this narrative, this film, this contemplation of love and robots? — she starts with her own yearnings: “I had a longing for trying out something different,” Schrader advises, an answer that Alma might give if she was able to initially admit to herself why she agreed to test out Tom to begin with.

“My previous feature was a long project with a lot of research. It's very dramatic, it’s about European exile. I had around 90 speaking parts in front of the camera, seven languages,” Schrader explains. “I heard about this short story, it's girl meets robot boy, and I was like ‘ooh, there is a simplicity here; it sounds like a love story but something more metaphoric’ — and I already started to have fantasies about it. I was very much intrigued by the idea to do something lighter, something which could not require three years of preparation and research and writing. And, to play around with something which I hadn't touched: love — a love story.”

Schrader continues: “then, while we were writing the script and very much left the actual story of the short story behind us, we constantly asked ourselves: what do we want to talk about? What are we interested in? Of course, it's nice to investigate AI and where we are at there, but also using this perfect robot to mirror who we are and what makes us human, and what are our desires and how do we treat each other, and aren't we all in our relationships already programmed somehow? Don't we all adapt in the same way like Tom tries to adapt Alma's preferences, and is it really that humans are defined by their emotions and instincts? Are these instincts really a natural thing within us humans, or are we, isn't this also how we are socialised — the fear, the ambition, the jealousy, the loss?” 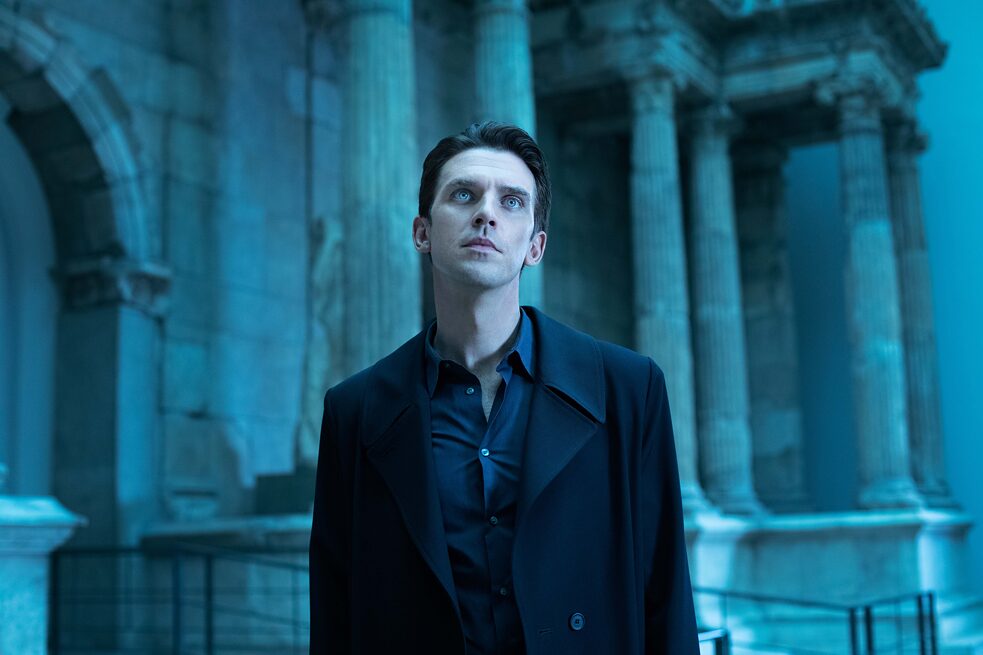 Alma's android date, Tom (Dan Stevens) | © Palace Films “It's a wonderful setup in this encounter, to examine how we function in a love relationship. And we discovered that we might have a simple rom-com setup, but also we might end up asking really fundamental questions — or exploring something fundamental about ourselves and how we behave, how we are trained, what's our concept of love and is it possible it might change in the future. Would it be possible for me to generate feelings for someone like Tom? It's an interesting question. And what's the difference to a living human — and is there really a difference? I could talk about this forever and I think it's really interesting.”

FINDING THE MAN AND THE MACHINE

Discovering the right approach to I’m Your Man’s concept — and the best way to take Ich bin dein Mensch, build upon it and pose all the questions that Schrader eagerly asks — couldn’t have been more crucial. But the film wouldn’t have been the movie it is if it wasn’t also exactingly cast, and with actors on the same page. Particularly important: Stevens’ work as Tom, the role that I’m Your Man was always going to either live or die by, depending on how well it could sell its android paramour. “He was a perfect, wonderful partner for this — and such a controlled and precise actor. It was pure joy,” Schrader notes.

She expands: “it started as, from our very first meeting — and we met as we meet now, in a Zoom — and in this very first meeting, we already started this fantasy. The first question was: do we want to see the machine, or is it just in our heads, is it purely naturalistic? Because you could also read the script like that, but I loved the idea that the machine is visible because that is of course the big hurdle for Alma. So we thought, what is it? And then we had different ideas. It was like a ping pong, we were sparring partners, [asking each other] ‘what do you think about this?’. I find, for instance, this strange gesture when men take their hair back with their hand, these elements of male performance, putting the hand in the pocket of the pants, these kinds of gestures — what makes it artificial? Is it maybe that a gesture stands alone, and only then he starts talking again? Or small, odd breaks, or odd separations from gesture and dialogue and talking?”

“So we were trying these things out, [and asking] what is too much, what is suitable, what is he doing with the eyes? What happens if the algorithm doesn't know for a second how to react? And these are my favourite moments, because there you can also see how much humour and irony Dan Stevens brings into the story — because he enjoyed these moments of being completely task-oriented about what to do next.”

“Then, when it came to shooting, I would say ‘oh let's elevate the machine element a bit here’ or ‘let’s go completely natural here for this part’. And then at the end of the day, it all comes together in the editing of course, where we had enough material to navigate the grade of artificiality.