Thoughts on the exhibtion
“We are all air dwellers and air makers.”

As air is invisible, we take it for granted until something goes wrong. It’s only when pollution clogs the atmosphere, smog obscures the horizon and people struggle physically during cold snaps and heat waves that we focus on what we can’t see.

Dr Malte Wagenfeld, senior lecturer for Industrial Design at RMIT University and Professor Jane Burry, Dean of Design at Swinburne University, have taken air- that invisible element essential for life- as the starting point for a major exhibition to be held at RMIT Gallery in partnership with the Goethe-Institut from 14 September until 17 November 2018.

“As designers, how do we design to investigate climate change and use less energy and resources whilst simultaneously creating more pleasurable and healthy interior environments? How can we communicate this to audiences and encourage them to think about how we are going to be living in a changing climate?” asks Wagenfeld.

Air is a structural material

As an architect with a strong focus on mathematics, Jane Burry has no problem with curating highly conceptual works based on an invisible substance. “Air is a structural material,” she explains. “The problem with designing buildings which have little consideration of the environment is that we are in danger of forgetting knowledge of how to build structures that are receptive to changes in temperature and the climate. We put in heating and air conditioning that use a vast amount of energy after a building has been designed rather than taking into account where the building is placed and the reality of the climate where we live.” 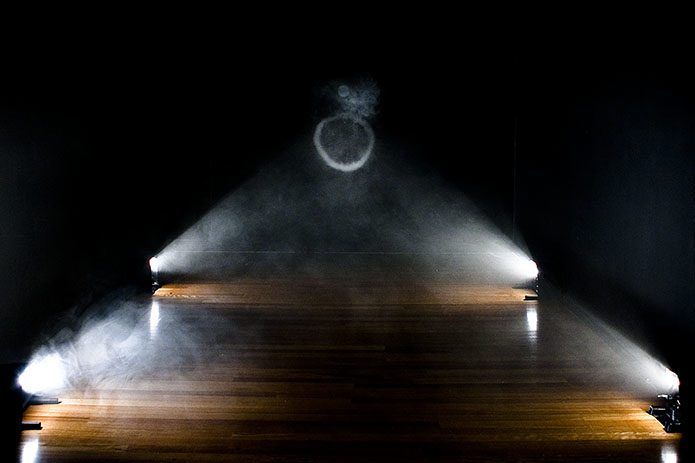 © RMIT
Malte Wagenfeld, the grandson of the German Bauhaus designer Wilhelm Wagenfeld, came to Australia from Germany as a child, and points to the passive cooling systems of the traditional ‘Queenslander’ buildings — constructed on stilts and well ventilated — as stellar examples of building for airflow and the reality of the environment. “By turning our backs on the design traditions of passive cooling and heating, and cocooning ourselves from the outside climate, we are turning our backs on using less energy and resources generally, and that has an impact on the environment,” he said. Wagenfeld recently completed his PhD exploring atmospheric encounters such as sound, light, breezes, air, smells, humidity and temperature, and investigated how re-contextualising these can lead to new designs for interior spaces.

“Whilst a designer might focus on the object that produces light or moves air I am more interested in designing the actual qualities of light and air. For instance, rather than designing a fan, I am interested in the air and how changes in air flow and temperature affect the way we interact with spaces.”

Spaces have a life of their own

Jane explains that space — the space around us as we sit at a desk, sprawl on the couch or lie in bed — has a life of its own. We might not see it, but this space is a complex eco-system. Think of the muggy, steamy bathroom after a hot shower and how you have to wipe the mirror clean of condensation, or your warm breath visibly escaping as vapour on a winter’s morning. “We are all air dwellers and air makers,” explains Burry. “Every individual has an impact on the environment, simply from the act of breathing.”

How will the curators present an exhibition based on air, when it is around us, and we can’t even see it? Wagenfeld says that audiences will be able to ‘feel’ and experience different environments relating to cities heating up because of climate change, and plunge themselves into momentary ‘thermal shock’ going from air conditioned to hot environments. 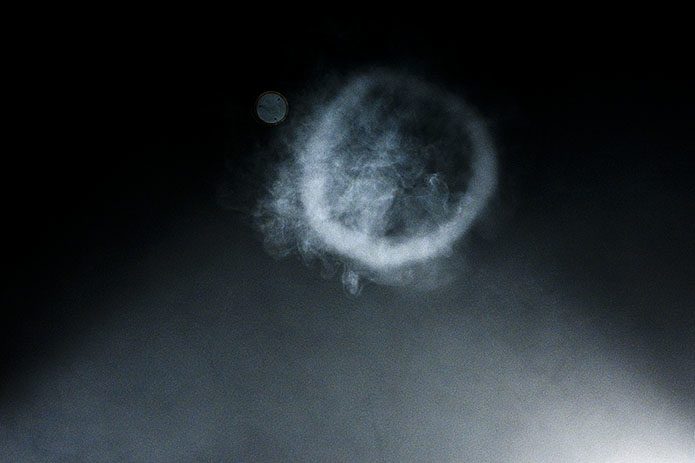 © RMIT
“This exhibition will allow audiences to engage with the interface of air, lived space and architecture. They will be able to move through experiential environments and atmospheres, interact with inflatable structures, and micro turbulence,” he said.

Helping audiences visualise the invisible will be achieved through works that utilise augmented reality to allow people to feel and sense the environment. “The aim of the exhibition is to make this a bit of an adventure, an interactive experience that hopefully will deliver a few surprises for people,” said Burry.

“The exhibition environment is an opportunity to give people a revelation through experience. We want audiences to go away thinking about air differently and about our influence on the environment we live in.”

PROFESSOR JANE BURRY is the Dean of the School of Design in the Faculty of Health Arts and Design at Swinburne University of Technology, formerly Professor and Director of the Spatial Information Architecture Laboratory (SIAL) at RMIT University. Jane’s research focuses on mathematics and computing in contemporary design. She has practiced, taught, supervised and researched internationally, including many architectural projects.

is Senior Lecturer of Industrial Design at RMIT University as well as a researcher and practicing industrial designer whose explorative designs and texts have been internationally exhibited, distributed and published. In addition to the design of furniture, products and appliances, he investigates how to design the ‘immaterial’, such as interior climates. The aim is to create healthier spatial environments for relaxed, productive, environmentally responsible surroundings.