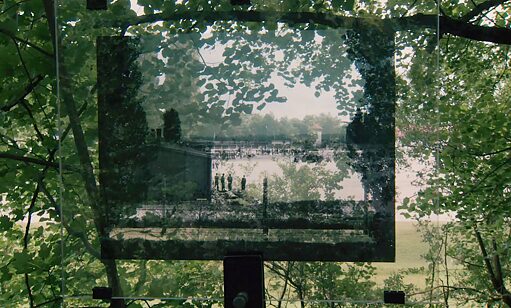 Three important German film festivals are guests in Brussels every year: the Berlinale Forum, DOK Leipzig and Duisburger Filmwoche. From this year's Berlinale Forum programme we present, among others, À pas aveugles (From Where They Stood) by Christophe Cognet. Following the screening, the director will be available for a digital film discussion with Pauline David from Le P'tit Ciné.

About the film: À pas aveugles (From Where They Stood)

Although they were risking their lives by doing so, prisoners in concentration and extermination camps took photographs and even managed to smuggle canisters of film beyond the camp gates. Yet their hopes of galvanising the global public into action would remain unfulfilled.
À pas aveugles examines these photographs with a calm, sober gaze. Director Christophe Cognet travels to Ravensbrück, Dachau and Auschwitz-Birkenau, amongst other sites, carrying black-and-white glass plate prints in his luggage. The images show, for example, an infirmary, a roll call area, the maimed limbs of female prisoners. Even the moments immediately before and after the industrialised murders were captured by Greek prisoner Alberto Errera, albeit in shadowy form.
The historical images and their present-day locations are overlaid on multiple occasions to ghostly effect: when visitors to the memorial sites pass behind the glass plates, it’s as if the individuals depicted have broken free from their fixed positions in black and white, setting themselves in motion as coloured spectres. (Cristina Nord)

Born in 1966 in Marseille, France. After studying film, his work as an author and director has frequently been concerned with the Nazi concentration and extermination camps, including Parce que j'étais peintre, l'art rescapé des camps nazis (2014). His book Éclats (2019) served as the inspiration for À pas aveugles.