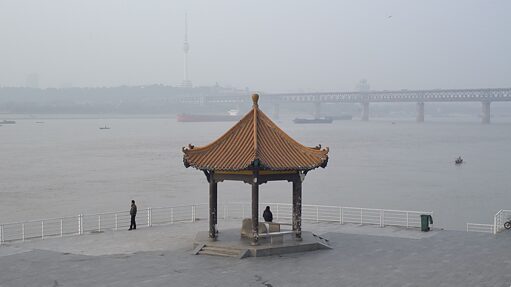 Three important German film festivals are guests in Brussels every year: the Berlinale Forum, DOK Leipzig and Duisburger Filmwoche. From this year's Berlinale Forum programme we present, among others, A River Runs, Turns, Erases, Replaces by Shengze Zhu. Following the screening, the director will be available for a digital film discussion with Cristina Nord, director of Berlinale Forum.

About the film: A River Runs, Turns, Erases, Replaces

There are the images of before, the images of after and the letters. The images of after come first, they stem from the same surveillance camera in Wuhan, empty streets that only throng with people again on April 4th, 2020, when the siren also sounds and they stand in silence. The images of before form the rest of the film, the camera picking out scenes of unlikely, unostentatious beauty as it crisscrosses the metropolis, surveying each for minutes on end, like a city symphony without music. Wuhan hurtles ever further into the future, a hive of construction that births neon-lit bridges and buildings from the misty fields and rubble, even as water buffalo still graze. The four letters are addressed to a partner, a grandmother, a father and a daughter, all of them no longer here. Their words appear as text and the images they evoke settle over the ones on-screen, overlapping visions of the past of an equivalent melancholy: crowds on the banks, a submerged pavilion, the first trip on the metro that passes under the Yangtze, a life swimming in the river, which blends with the hazy sky in the distance. So much water under the bridge, but the river keeps flowing. It doesn’t forget. (James Lattimer)

About the director: Shengze Zhu

Born in 1987 in Wuhan, China. She works as a filmmaker and producer in Chicago. She made her debut, Xu jiao, in 2014. A River Runs, Turns, Erases, Replaces is her fourth feature-length film.