In “Images of Afro-Atlantic Slavery: The Other of the Other,” Lilia Schwarcz deconstructs stereotypes created by representations permeated by European goals and standards.

1. The image that we have of slavery is constructed

Brazil was the last nation to abolish slavery in America, allowing artists and foreigners to document the African history in the Country with drawings, prints, paintings, and photos. These records were diffused throughout the world as portraits of the trajectory of African nations that were brought to the continent. “They are elements that carry European visual intentions in which artists reproduce a Colonial vision prone to being adapted to any place,” affirms Lilia Schwarcz. Repeated, copied, and applied to new contexts, these images reveal a politics of domination in portraying enslaved people: strong Africans, without shoes on, with little clothing, being disciplined, carrying heavy loads, following and serving their well-dressed masters.


2. History was portrayed in such a way as to annihilate the slaves’ individuality

These works of art - many of which created by notorious names, such as Debret and Rugendas - keep details that are barely commented on but fundamental in the understanding of Brazil. “There was no space for individuality, rebellion, fugues, quilombos - these were rarely ever portrayed,” explains Schwarcz. “They are images that portray invisibility and anonymity,” she complements. In an almost maternal illustration of slavery, a relationship based on violence and affection is revealed, with individuals grouped in anonymity and with “nations reduced to biological blocks instead of the various peoples that comprise the diaspora.” 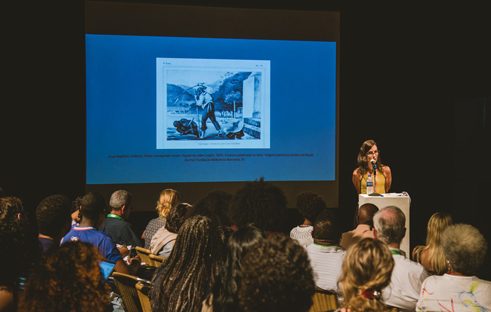 Lilian Schwarcz shows photographs of Christiano Junior (Untitled, c.1870) | © Taylla de Paula There was a didactic role that composed the spectacle of slavery. There were declarations that the hierarchy existed and could be kept, “it created an order to be coped and naturalized the violent domination of other peoples,” in Schwarcz’s words. As such, these images are and were responsible for illustrating a vision that Brazilians had and have os the Country and of slavery. 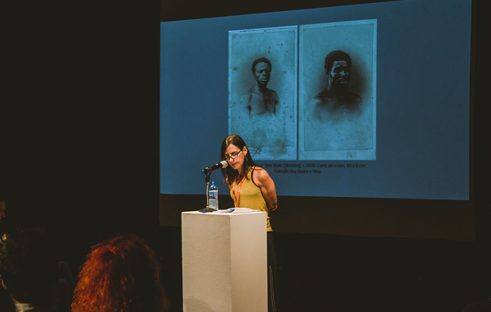 Lilian Schwarcz shows photographs of Christiano Junior (Untitled, c.1870) | © Taylla de Paula With the advent of photography, copies that were more faithful to history began to be diffused. These images portrayed the prosperity of families of name and surname, white children interacting with enslaved persons, treated as individuals without identity, dehumanized ghosts. Even being controlled by the elite and the photographer, the images offered a visual convention in which real details of the scene that was idealized by the colonizers emerged. It then became possible to see other expressions of these people, the way in which they dressed and behaved. They are manifestations that brought a wide revision of the behavior and work pattern, of diligence and submission. In them, discomfort is notable, and constraint is visible.


5. The reconciliation created with the abolition of slavery is a farce

With the abolition of slavery, new image patterns emerge, portraying reconciliation, forming the white European point of view: “slaves showed gratitude, as if liberty was not a right,” said Schwarcz. It also began the denouncing of the slavery system, of people being commercialized. On another hand, a condescending approach persisted, with blacks giving thanks for liberty. This process denies history, even in the movement of emancipation, creating a “national amnesia of slavery,” as affirms Schwarcz.


6. The images of slavery repeat themselves in current events 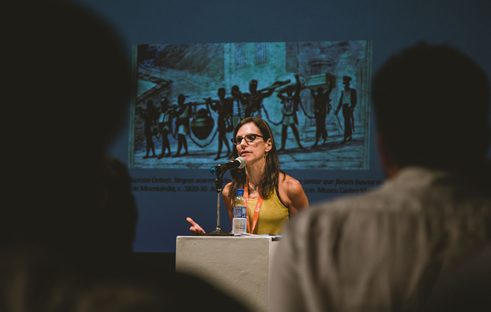 Speaker shows image of painting that reminds the audience of current occurrences: Jean-Baptiste Debret (Chained blacks carrying to jail the dinner that they went to pick up at the Misericórdia Hospital, c. 1820-30) | © Taylla de Paula During Lilia Schwarcz’s talk, some of the works that were shown were associated with contemporary facts: the story of an Afro-descendent adolescent (the name os whom was not revealed, due to him being underage) chained up to a pole and flogged, in 2014, in Rio de Janeiro, as used to be done in the pelourinho; a scene of the TV show “Roots” (of Alex Haley, William Blinn, Ernest Kinoy, M. Charles Cohen, James Lee, 2016), which shows policemen tying up a group of Afro-Brazilians to a rope in sequence, as used to be done with slaves; a scene of the cartoon “The Masters and The Slaves” (Casa Grande e Senzala, a TV Cultura adaptation of the book by Gilberto Freyre, from the 1980s), which shows a nanny carrying a girl on her back, as if she was a horse, in a game that teaches children of the possibility of mutilating other people; the adolescent who, in 2018, made her debutante party in Recife, with the theme of “slavery”; and the assassination of the councilwoman Marielle Franco, also in 2018. Resident of the Maré community, in Rio de Janeiro, Marielle had had access to the university through the quota system and was assassinated in a crime that still has not been solved.


7. It is necessary to politicize the images of slavery

Although veiled, the ghost of slavery is real in Brazil. “Contrary to what is perpetuated, the Country is a cultural cauldron without prejudices. We live in a racial democracy surrounded by racists everywhere,” stated Lilia Schwartz. The quota system in the university changed this scenery, but it is still a beginning. According to her, we need to politicize these images that do not live in the past, as culture is not a consequence or a product, but a production.