Perfomrance
Rituals as fragments of lives

​Slippages and frictions mark the meetings and pathways of artists, performers, curators, and researchers around the hallways of the Goethe-Institut, but they also go beyond their walls.

In the Echoes of the South Atlantic conference, exchanges of visions of the world come in multiple ways: panels and formal conferences divide the space with artistic expressions and religious rites. 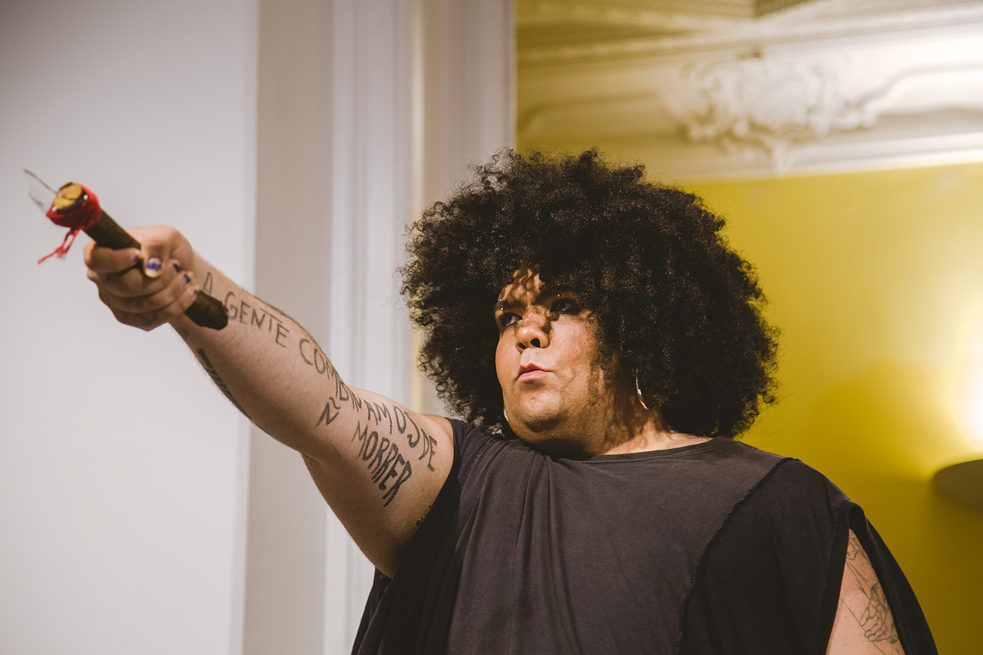 Jota Mombaça | © Taylla de Paula The public watches attentively all of the movements of Jota Mombaça. After cutting up pieces of red thread, they chose and separated the pieces of a broken glass bottle that they had just broken with a hammer. Little by little, carefully, thinking of each movement, they tie the sharpest pieces at the tips of seven thick sticks. The performance “Us made a deal not to die,” ("A gente combinamos de não morrer”), inspired by the work of the same name of the writer Conceição Evaristo, brings to the surface debates that are dear to the performer: matters of race and sexuality, besides decolonial approaches. The Northeasterner from Natal (RN), defines their work as a “performance-tribute-commentary.” Feelings of survival and violence are put in scene for a silent audience, in a body that, alive in the world, speaks for itself and tenses up social categories. At the end of each process, objects of the most varied meanings are born: weapons, tools, or sacred symbols? Be it what they are, Jota Mombaça wielded each one of them and pointed to the spectators, staring firmly, always forward. 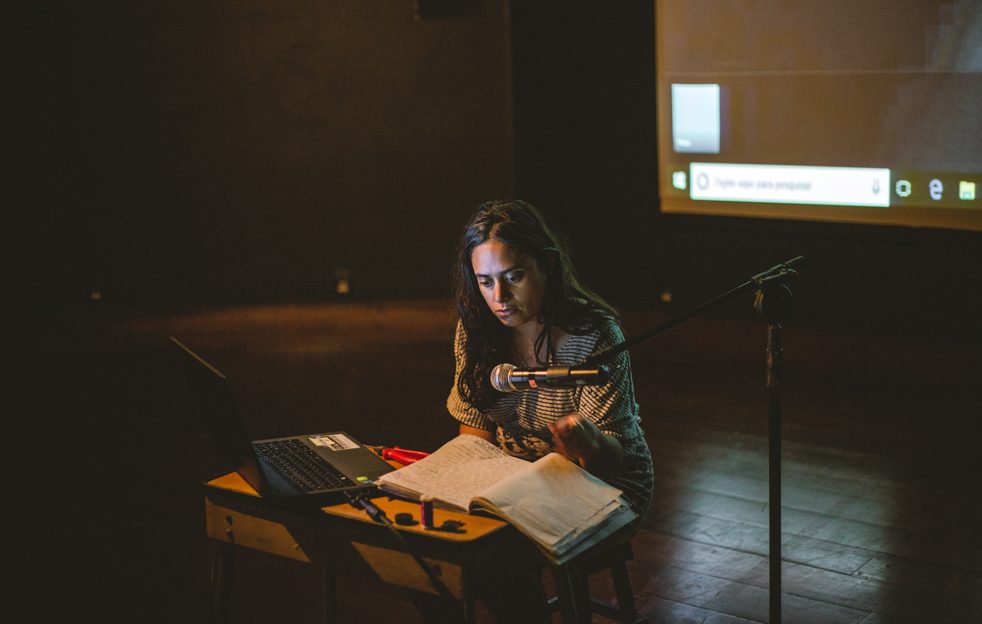 Sarojini Lewis | © Taylla de Paula In the theatre, Google maps are projected on a large scale in the background of the stage. The center is occupied by the Dutch artist Sarojini Lewis, with only a microphone and a notebook, from which she controls strolls through the projection. She is illuminated by a weak lamp, coming from the ceiling, and a flower necklace wraps around her neck. The performance “Fernanda Romero: Searching for Madame Janette” puts in scene a story of loves, break ups, and abandonments. While she reads the narrative of a disappeared woman, Sarojini conducts the audience through a geographic journey on the map of Brazil and of South America, topicalizing sexual and feminine aspects. This body in transit also explores prostitution. In the end, the performer excuses herself in order to read a love letter with “inflammable thoughts.” Standing up, assuming the role of the lyric-“I" that disappears from the world, the artist says that “butterfly rules” were imposed onto her.

Meetings of an Atlantic diaspora

The arrival of visitors in a religious environment always involves, initially, a moment of mutual recognition. In the Oxumarê House (Ilê Axé Oxumarê), the expectation is also one of the energies shared by the sisters and mothers of the terreiro. The presence of the Nigerian princess Iya Adedoyin Talabi Faniyi (born Olayiwola-Olosun), from the city of Osogobo, catalyzed transatlantic trades at the House. Received with celebration and respect for the older mothers of the House, Iya Adedoyin lead the salutation and the request for being excused by all of the orixás seated there. The Master in African Studies is also high priestess of the traditional yorubá religion in Sun, Obatalá, Ifá, Egbe, Obaluaye, Ogboni, Aje, Baayanni. The atabaques, conducted by the sons of the Oxumaré family, chanted a special chant in honor of Oxum. Around the sacred objects, the princess danced in a circle with daughters of Ilê Axé, in salutation to the mother of the sweet waters. For yakekerê Sandra, the moment had the tone of a big party and commemoration of the House. “To receive you here is a present. Each brother and sister is another fight to demystify the racist discriminatory gaze directed towards religions of African matrices. The resistance and attempt to break the currents still persists.”