The South Atlantic suggests multiple approaches, that range from the poetics between death and the maternal strength all the way to humanism, passing through the transformative power of the arts and the genocide of black populations in Brazil.

Mediated by the activist and stylist Carol Barreto, this discussion departs from plurality in order to arrive at the idea of “Memory and Solidarity in the waters of the Atlantic.”

The mother of water

Many black men are piled like merchandise in the illustration of one of the boats that left Africa with entire populations in their basements, centuries ago. A smaller embarkation, also overcrowded, exhibits Eritrean and Somali refugees, photographed in Lampedusa, in Italy, where a shipwreck victimized over 360 people, in 2013. Displayed side by side, the two scenes point to a dialectic of the Black Atlantis (Atlântico Negro), series of experimental performances by Ayesha Hameed.

Leader of the Master’s program in Contemporary Art Theory at Goldsmiths, at the University of London, England, Hameed brings to the Goethe-Institut Salvador a fragment of the project in which she explores the sound and the moving image in suggesting post-lives in the Black Atlantic. For this, she adopts as references the contemporary migration to the Mediterranean, afro-futurist sound systems, and the idea of anthropocentrism and imagery concepts of Walter Benjamin.

“I seek to think about sound, image, water, violence, and history as elements of a live archive,” she explains, and completes: “I also use time travel as a historical methodology.” The gaze of Ayesha Hameed leaves the surface and dislocates to the bottom of the ocean, valuing less the trips than the lives that were lost at sea. In her narrative she explores a submersed city, an imaginary Drexciya, founded by children expelled by their mothers, pregnant, and prisoners of those ships.

In the fiction, life imposes itself. “Thrown at sea, these babies adapt themselves to live under water, since they have left from amniotic liquid straight to the bottom of the Atlantic,” situates the researcher. There lies the origin of a black community that symbolizes, according to Hameed, “the materiality of the oceanic space.” During the event at Icba, she presented an excerpt of the never before seen video “In the Shadows of our Ghosts,” which will be exhibited in London, at the end of April.

In the video, superimposed images of earth and sea tell the real tragedy of a ship found in 2006, in Barbados, with 11 bodies intoxicated by the sun and the salt water. They were migrants from Senegal, Guiné Bissau, and Gambia, who paid 880 pounds to leave the city of Praia, the capital of Cape Verde, but never arrived at the final destination. The ship, that ended up adrift, traveled for almost three thousand miles, following the same route of many centuries before and experimenting a similar horror. “Bodies and ship are like a futurist amalgam, that carries traces of life and of death,” observes the artist.

Humanism at the center 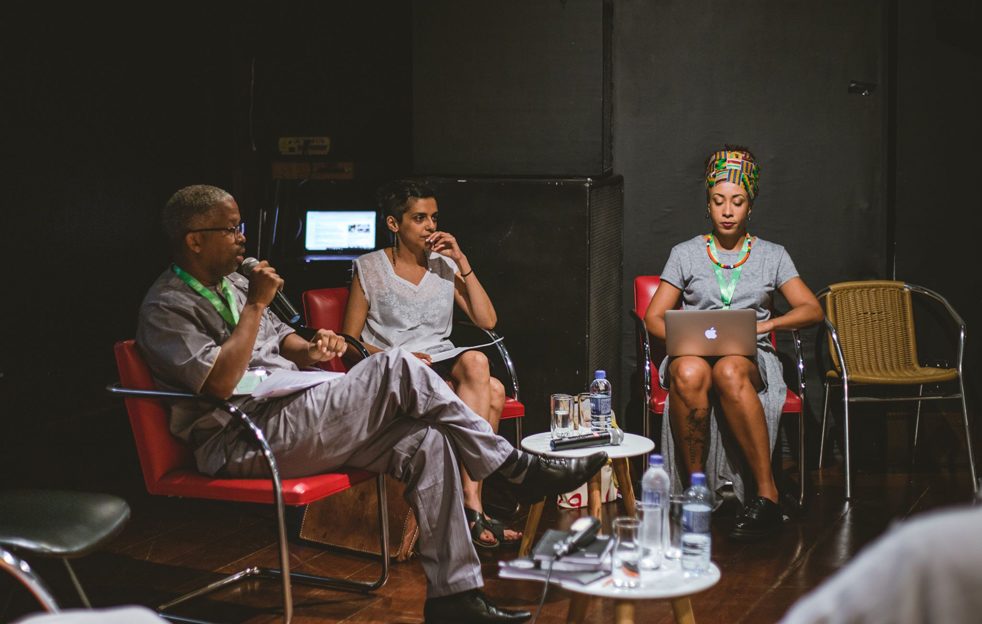 Abdulai Sila talking in Panel 4 | © Taylla de Paula After running the world and living 16 years outside of Guinea-Bissau, the engineer and writer Abdulai Sila understood that it would be necessary to “recreate humanity with humanism, having Africa as a crib.” When Sila was born, his country was not yet free. He believes, however, that to approach contemporary matters is harder than to conquer independence. “We defeated colonialism and I survived that. Now I feel like I am fighting my last battle.”

The work of Sila is vanguardist in the use of emerging technologies to accelerate the development of the country. He is co-founder of Eguitel Communications, the first internet server of Guinea-Bissau, and also of INEP, National Institute of Research. But the battle that he refers to has a deeper meaning, of assuming a global blackness. “Five centuries after one of the most cruel ways of subjugation of all Africans, including the diaspora, we share this feeling, this sort of essence, where our history is,” he explains.

It is not about redemption or rehabilitation, situates the writer. He defends the redefining of the African identity. Abdulai Sila believes that, just like the center of political decisions go through Europe, the United States, and currently, Asia, the African continent will be next. “For now, it is still not normal that countries outside of Africa want to be members of the African society. But this new identity is growing,” he bets.

About the risk that this international protagonism repeats “disasters from the past,” he ponders that it is "out of the question.” For Sila, who currently presides the Association of Writers of Guinea-Bissau, this will be equated by humanism. “Societies can coexist and fight together for current matters, be it the environment, poverty, or injustice.”

The plurality of people involved in the debate is highlighted by the professor, remembering that cultural matters are political, but should not limit themselves to the government, but include NGOs, artists, and cultural agents from all over the world. In this context, Schneider leaves a provocation to Icba: “Where are the Portuguese in this unconference?,” he questions, before the audience of representatives of Portugal at the event.

Schneider develops a thinking in which it is fundamental to know what these discussions are happening for and what it means to use culture as a reference and as a “soft power.” Decolonization, “this word that is so difficult to pronounce and to be understood,” must be seen equally as one of the most relevant topics to the agenda of the global South at least in the next ten years, defends the professor.

To him, it would be interesting to know if these same themes, raised 15 years ago at the World Cultural Forum, in Salvador, have been implemented. “I worked a lot of what we are seeing next to Gilberto Gil and wanted to to see what has found a sustainable path.” Schneider points to the education for the arts as being one of the most important movements in the concretizing of demands. It is in the curriculum of schools that he sees real possibilities for transformation.

out death and origin 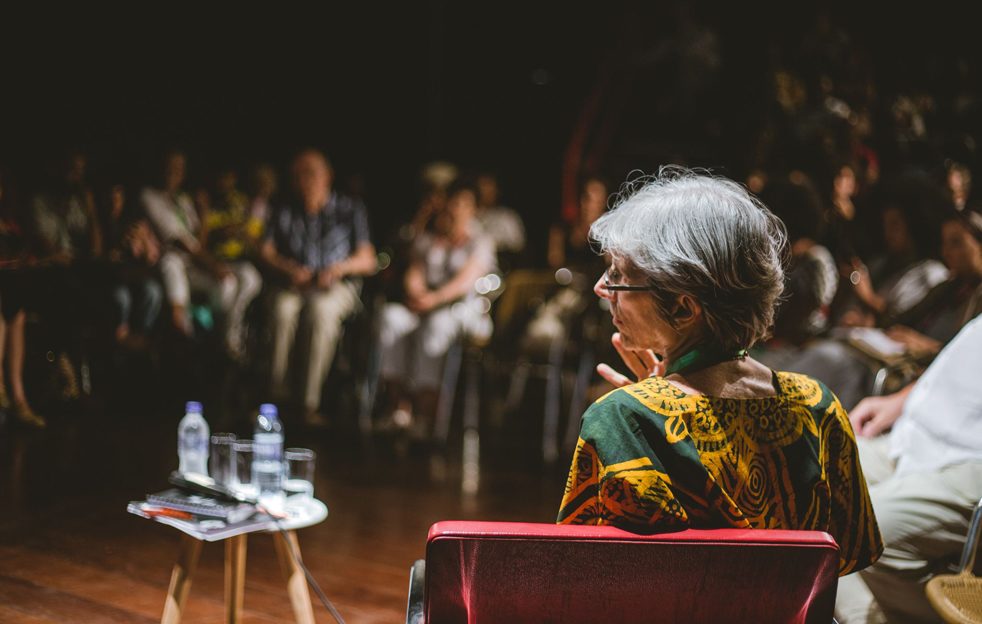 Elisa Nascimento | © Taylla de Paula The statistics presented by Elisa Nascimento are direct and link the Atlantic experience in Brazil to the genocide of the black population. Doctor in Psychology by the University of São Paulo and director of the Ipeafro (Institute of Afro-Brazilian Research and Studies), in Rio de Janeiro, Nascimento reminds the audience that almost five million of the Africans taken to other continents arrived to Brazil — 45% of the total of enslaved populations.

The research reinforces that it is necessary to think of relationships between the diaspora, the genocide of the black people, and the process of masked racism. The theme, moreover, is treated in a book, written by Abdias Nascimento (1914-2011), founder of the Ipeafro and one of the main representatives of the struggle for human rights of the black populations in Brazil. In a self-definition, the institute can be resumed in “ubuntu,” a Zulu word that carries multiple humanistic meanings such as the idea “I am what I am by what we are."

In her talk, Elisa Nascimento situates Brazil as a nation with the largest rates of homicide in the world. The director of Ipeafro illustrates, with data from the Amnesty International, the Brazilian reality that overcomes that of many countries at war. There are more than 30 thousand deaths per year, 7 every two hours, victimizing in its majority the black youth. The indifference before the fact is also alarming, as put Elisa Nascimento: only 5% of the homicides are investigated in Brazil.

Besides the physical death, Nascimento highlights the cultural death to which the black population is submitted in Brazil. She highlights the Experimental Theatre of the Black, project by Abdias do Nascimento for an affirmation of identity as a symbol of resistance. During the event at the Goethe, Elisa also takes advantage of the meeting of the activists and thinkers from various countries and convokes them all to unite for the cause of the Rio de Macacos quilombo, in Simões Filho, that for years has been facing restrictions to continue existing.