The anthropologist and professor Moises Lino e Silva, mediator of the barcamp who dwelled on concepts of the south of the theory and of disobjectification, made a critique of anthropography and of the insufficiency of symbolic and semantic language.

Cadu: WHERE DID THE THEME “SOUTH OF THEORY” COME FROM?

Moises: The effort of organizing a conference of this type, that tries to rethink ways of knowing and the importance of this relationship which is much more than the South Atlantic and not of the European way of doing things, was necessarily what we asked ourselves about, if we decided the themes and the format, as is generally done in traditional academic conferences. From the beginning, when we were organizing the conferences, we tried to make a format that was not restrictive. As such, the theme was decided half an hour before it started, in a process of participation in which people could suggest themes, a type of brainstorming, and vote on them. The four themes with the most votes were debated during the barcamps.

Cadu: WHAT WAS THE WORK PROPOSAL SUGGESTED BY THE GROUP?

Moises: The format was open, what we call an unconference. We only establish minimal rules of conviviality in the beginning, for people to feel comfortable, and everything flowed naturally. At the end of everything, the exercise was to register and create a memory of what was debated so that this information can be used in the labs, which will be defined by the format of intervention and not by theme. In the labs, it is possible to discuss any theme through an educational, artistic, social, or written intervention.

Cadu: WHAT DID THE GROUP UNDERSTAND AS “SOUTH OF THE THEORY?”

Moises: The discussion departed from the definition of the theme as “the south of the theory.” It was a point of departure to think not geographically, because it could seem that we already know where the south is and that all that is left for us is to think about is theory. The south of theory already opens up a question: is there only one possible south for the theories? What is theory in itself and what is the south? The two categories [theory and south] were put in debate. On one hand, there is a consensus that this theme is not new, it is not a recent discussion. Questions such as: was anthropophagy already a movement that put this into question? The idea of taking something that seems to be from the north, foreign, and to somehow incorporate, modify, reuse it? Although there is no consensus that anthropophagy should really always return to the discussion - as it may seem like it was the only significant thing that was produced in the artistic movement -, it always reappears in the discussions. Katharina von Ruckteschell [executive director of the Goethe-Institut São Paulo] asked the group: “But do we really need to talk about anthropophagy once again?” Another interesting debate was to think not only the theories of practice, which is already a theoretical debate that is formulated and known, but different practices of theories. Could it be that narrating a story could be considered a practice of theory, and, if it is, could it be an example of this south of the theory?

Cadu: WHICH ARE THE TENSIONS THAT ARE PRESENT IN THE GROUP DISCUSSIONS?

Moises: The biggest tension was to think about the place of the north. We are discussing the south, but that is a relational category. Does it need to be a relation of opposition? It seems to me that anthropophagy is not necessarily oppositional, it is not to negate the north and the foreigner, but to incorporate him. This is significant, after all, we are in the Goethe-Intitut and this debate was possible after an invitation that came from the north, we may say. Which place can the north occupy in this discussion about the south of theory? Katharina again raised another point: the Is the south of theory a place that is still theoretical or is it a place outside of theory? There are other ways of knowing that are not necessarily theoretical. The question is open. 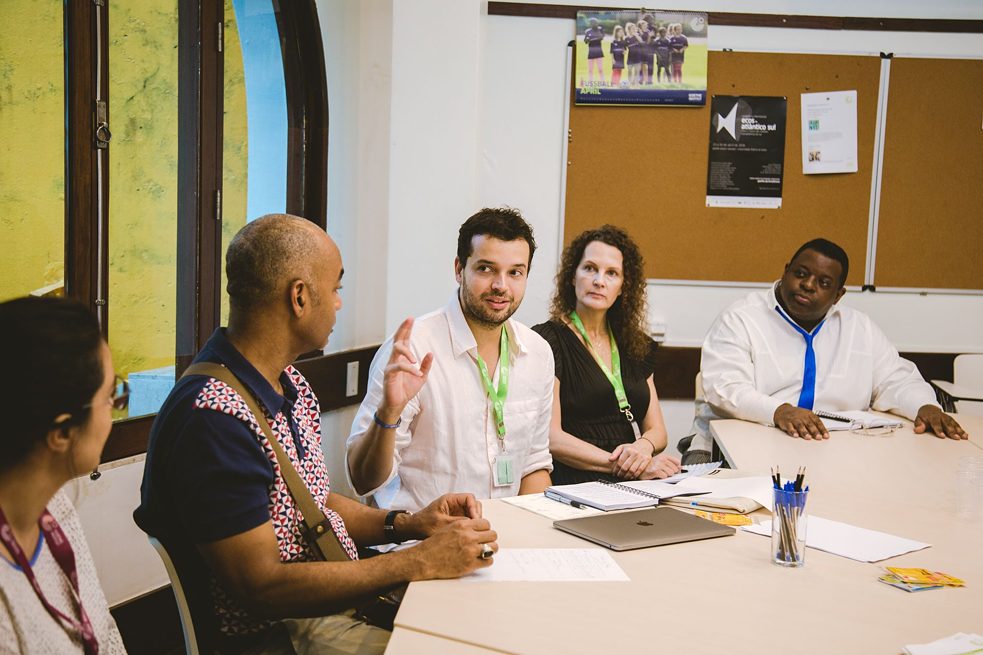 Cadu: SPEAK MORE ABOUT THE CONTROVERSY AROUND ANTHROPOPHAGY

Moises: We discussed the importance of anthropophagy as a category. Could it be that we get stuck in this and in other categories? What is theory, what is anthropophagy, could it be that it is not possible to explain things with another vocabulary? The biggest tension was of whether we would include or not the term anthropophagy in our memory.

Cadu: DUE TO IT BEING A BRAZILIAN TERM, WAS THERE ANY DIFFICULTY IN ITS COMPREHENSION BY FOREIGN MEMBERS?

Moises: No, the foreign participants were even more interested in the theme. To them, anthropophagy has an interesting meaning. People who know the area more deeply, the artistic discussion, the art history, they are more critical. They ask up until what point is anthropophagy a truly Brazilian concept or not. Up until what point is it a concept with a colonialist spirit, or not? Up until what point does it dominate the scenery of what can be said when there exist other ways of thinking, other movements? We debate about the anthropophagic manifesto, the idea of a manifesto itself, which is also a way of saying theory, but in the sense of calling for action.

Cadu: WHICH RESULTS DID YOU ARRIVE AT?

Moises: We made a register of ideas, a memory that should be presented in the labs. We built a collection of suggestions about the use of language and we asked: could we also go beyond symbolic language? We touched on the question of the insufficiency of symbolic language. People are not satisfied about having to communicate only through symbolic language, they want to go beyond this symbolism. This is not a recent discussion. It is called an ontological turn. If we are not satisfied only with the symbolic, maybe the semantic is not sufficient to deal with our problems. Another important term was disobjectification. What would it mean to “disobjectify?” On the first day of the conference, when a German speaker spoke about the meaning of repatriating museum objects, someone form the audience mentioned that, for African peoples or even the Brazilian indigenous, what we call “objects” are subjects. This discussion of changing the status of the objects to subjects is not a matter of only one meaning, but of actual existence. It is not that they are attributing different meanings, but that they feel the world in different ways. So, what was opened up in the discussion was the possibility to explore the south of theory, a possible south. We arrived at the idea that there can be more than one south and that is implemented in some of these problems, concepts, and discussions. I am very curious to see how it will actually work.