The phrase was always there in the fine print, but the notices became considerably bolder during the pandemic. The surprising thing to many is that the ubiquitous words meaning “keep out,” “go away,” were posted in Toronto’s public parks. Once again, the pandemic put a spotlight on conditions that  were heretofore overlooked.

I first saw the phrase boldly posted this past winter at Earl Bales Park in North York. Home to one of Toronto’s diminutive ski slopes thanks to the deep ravine created by the west branch of the Don River, it was closed by provincial order. Tacked on top of the permanent, friendlier sign normally welcoming skiers at the top of the hill was a red, all-caps one reading, “Toronto Municipal Code #608-22 PRIVATE PROPERTY – NO TRESPASSING – NO TOBOGGANING – NO UNAUTHORIZED USE”

Close readers of the municipal code know that Chapter 608 regulates the conduct and use of parks in Toronto, with subsections dealing with specific areas. It’s remarkable just how much activity is regulated by it, and reading through the long document there isn’t much park activity that isn’t potentially controlled in some way. You aren’t ever just existing in a park as there’s a hidden scaffolding of rules governing all of it. Section 22 of 608 relates to skiing, tobogganing and sledding. When the city issued its trespass notices at various encampments around the city it cited chapter 608 too, as section 14 deals with tents and structures. Those notices were the precursor to the evictions that have taken place and also referenced the Province of Ontario’s Trespass to Property Act.

Trespass? In a public park, on publicly owned land? It’s confusing at best but adding to the mixed signals is a page on the City of Toronto’s website that tries to explain the difference between public and private property. “Public property is any government owned sidewalk, lane, street, boulevard, road or street allowance, right-of-way or park” while “Private property is any land owned by individuals or corporations other than the government.”

Taking this altogether, the “public” owns private property collectively, where the same rules that apply to what we think of as conventional private property, owned by individuals or corporations, can be applied to quasi-public property, like parks.

The line between public and private in Toronto is often blurry. When walking on sidewalks in the financial district or by condos, private property sometimes appears to be public, whether it’s a corporate plaza or merely the invisible property line itself. These lines are mostly crossed without noticing, but linger too long on the private side, carry a protest sign, take too many photographs, set up a tent or ask people for change and those rules will suddenly become quite visible in the form of a private security guard. 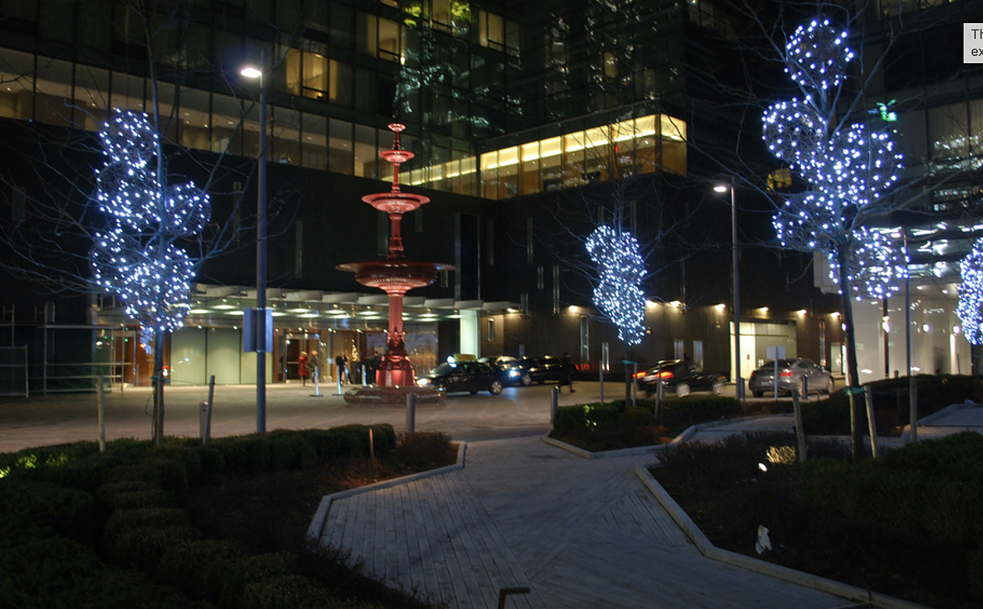 Further complicating this in Toronto has been the introduction of POPS (Privately Owned Public Spaces), accessible park or plaza spaces created through negotiations between the city and developers in front of new buildings. “POPS are a key part of the city’s public realm network, providing open space in much-needed locations across the city and complementing existing and planned parks, open spaces and natural areas,” reads the city’s description of the value of POPS, but it also includes this notice: “Access to some POPS locations may be refused in certain circumstances.”

Once again it’s a vague, open-to-interpretation situation that is discomforting at best, and the risk of an overzealous security guard in practice is quite real. While not a POPS, when Yonge + Dundas Square opened two decades ago, it was patrolled by a private security team, as it still is, and famously somebody protesting George Bush and the Iraq War was arrested for doing so in this public, but complicated, place.

With the pandemic perhaps the biggest pressure, and test, of these invisible rules and tensions within public parks arrived with the establishment of the encampments. For the first year or so it seemed, generally, that Toronto, both officialdom and residents, tolerated them: it was an exceptional, emergency time during a pre-existing housing crisis and though absolutely not ideal, encampment residents said they felt safer there than in crowded city shelters.

Much the same way park curfews are often posted in some jurisdictions – “park open dawn to dusk” and the like – private property rules exist under the radar, only to be activated when the municipality wants a perceived nuisance removed. A recent investigation by the Toronto Star found that most evicted residents had not found permanent housing despite city assurances, yet the city went in full force with a military-scaled force.

Perhaps the most striking part of encampment evictions in Toronto were the dozens and dozens of private security guards in neon yellow shirts subcontracted by the city to assist in resident removal. The public-but-actually-private nature of public space could hardly be more boldly stated.

Shawn Micallef is a freelance contributing columnist to the Toronto Star and other publications.