In the fall of 2019, Frankfurt street artist Justus Becker visited the city of Toronto as a guest of the Goethe-Institut to work on a site-specific artwork, and Toronto artist Alex Lazich was in return invited to Frankfurt, just in time to finish his piece for the Frankfurt book fair 2020.

"Diversity is our strength"

The artwork Bacon designed for Frankfurt is based on the city of Toronto's motto "Diversity is our Strength" and the European motto "United in Diversity". Bacon's work depicts two heraldic animals representing the two twin cities - an eagle for Frankfurt, a raccoon for Toronto. In creating the artwork, the Toronto artist had to be guided by the color scheme and design of the subway station. For this reason, the painting was designed and implemented in black and white. Watch the interview here:

Artist Alexander Lazich, artist name Bacon, has made a name for himself around the world with his distinctive graffiti style and vibrant murals. He learned on the street from the pioneers of Toronto's original graffiti scene in the '90s and now teaches young artists in turn.

He is internationally known for his colorful works. Bacon views street art as an art form that is passed down from one generation to the next.

In his work, he deconstructs traditional graffiti spraying techniques in an abstract style that mixes with the typographic elements typical of graffiti. The use of a mature color palette and the mixing of realism with stylized graffiti fonts give his works a unique look.

He became known to a wider audience in 2016 with Machu Pichu - his contribution to the StART (StreetARToronto) mural project New Seven Wonders of the World.

The StART program is designed for street and public spaces. It began in 2012 as part of the city’s Graffiti Management Plan in an effort to reduce vandalism and “replace graffiti with vibrant, colourful, community-engaged street art.” Artwork has appeared in laneways, on traffic signal boxes, underpasses, or businesses.

Back in 2019, to mark the 30th anniversary of the sister city relationship, Frankfurt resident Justus Becker created an abstract yet detailed painting on the side wall of a building at 20 Charles Street East, at the corner of Yonge Street, depicting a face and, reflected in a pair of glasses, the skylines of Frankfurt (left glass) and Toronto (right glass) .
We caught up with Justus Becker after he finished his mural to chat about the piece and his work. The interview has been condensed and edited.

I was planning on one day of doing the primer and another day of sketching, but it was too rainy to complete in the two days. So in the end it took five days to complete. For the launch we're expecting both the Mayor of Toronto, John Tory, and the mayor of Frankfurt, Peter Feldmann, who will cut the ribbon. 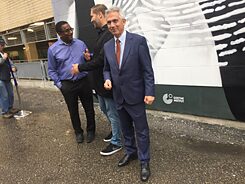 The lack of funding doesn't prevent art from being created, but it's much harder to sustain a living as an artist, and the result is less art in general. But we will see - maybe this model inspires Peter Feldmann to some similar type of project.

Street artist Justus Becker aka COR was involved in street art from a young age. His trademark are photo-realistic faces, which proved to also be a good choice from an economic perspective: COR is one of the few street artists who is able to make a living with his art.

He alienates the photo-realistic motifs with abstract colours and shapes to add meaning and, sometimes, context. More recently he made waves with the joint project with Oguz Sen, a mural of Alan Kurdi, the little Syrian boy who died trying to flee his country, adding their voices to the international outcry over the humanitarian catastrophy taking place in the Baltic Sea.

Up to the present day, the creation of larger-than-life murals is central to his work and, to put it in his own words, his "main gallery remains the street" in spite of his participation in group and single exhibitions throughout the globe.

The 2019-2020 Frankfurt-Toronto sister city exchange with artists Justus Becker and Alex Lazich is a joint project by the City of Toronto and the City of Frankfurt, supported by the Goethe-Institut Toronto.