The German Book Prize
The longlist – the bottom line

Literature prizes are all well and good, but it isn’t always the case that the prize-winners are also the most successful books: let’s look back at the German Book Prize over the last ten years.

At the Olympics there’s no doubt – the gold medal goes to the fastest runner. This approach is impossible with a prize for the “best novel of the year”. The range of winners of the German Book Prize varies from accessible works to elite literature; and jury success can sometimes differ significantly from success on the book market. We look back at the award-winners over the past ten years: Eugen Ruge | Photo (detail): © Claus Setzer The novel In Zeiten des abnehmenden Lichts (In Times of Fading Light) introduced Eugen Ruge to a wider readership overnight and is another retelling of German history in the popular guise of a family novel. Ruge unfolds a panorama of the 20th century involving a huge number of people, telling the reader about exile, the horror of the Soviet penal camps, and the hopeless formation of the GDR until its ultimate miserable end.

A Deutschlandroman, a sophisticated and ambitious work that quickly became a widely-read classic. 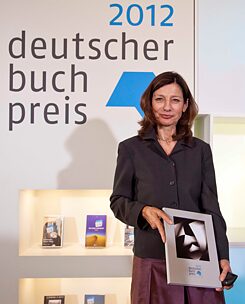 Ursula Krechel | Photo (detail): © Claus Setzer Landgericht (State Justice) by Ursula Krechel is another book to depict a typical 20th century German fate in a vast panoramic sweep. The post-war era forms the focus of the story – which is based on actual events – of Richard Kornitzer, a lawyer who fled to Cuba into exile in the 1930s and is subsequently trying to find his feet again in the completely destroyed city of Mainz. Ursula Krechel confidently mixes documentary material with fiction, and despite her apparently cool, distant style the tragedy of this life thrown off course by National Socialism is conveyed movingly to the reader.

Landgericht was a deserving winner. Yet at the same time 2012 was such a strong literary year that it would have been possible to pick half a dozen “best novels”, and that highlights an unsolvable problem with the award: high-calibre novels like Wolfgang Herrndorf’s Sand or Stephan Thome’s Fliehkräfte (Centrifugal Forces), Indigo by Clemens J.Setz and Nichts Weißes (Nothing White) by Ulf Erdmann Ziegler were all published at the same time. On the other hand Jenny Erpenbeck’s Aller Tage Abend (The End of Days) only made it to the longlist – just like Olga Grjasnowa’s debut novel Der Russe ist einer, der Birken liebt (All Russians Love Birch Trees), which was highly commended by critics. 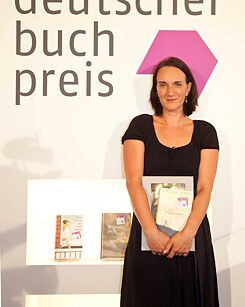 Terézia Mora | Photo (detail): © Claus Setzer In Das Ungeheuer (The Monster), lethargic IT engineer Darius Kopp has to accept that he had barely known his wife Flora after her suicide. As he reads her diaries, they expose a marriage in which both partners lived alongside each other with no deep connection.

The novel impressed the jury with the contrast between the two voices and the balance of sad yet frequently comical scenes. This humorous touch is often much needed since the author has clearly studied in fine detail what depression does to people, and thus the passages about Flora repeatedly describe this with an almost clinical precision which does wear thin after a while, and there is soon a sense that nothing new is being revealed. 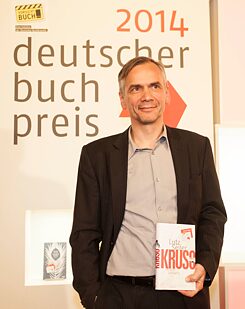 Lutz Seiler | Photo (detail): © Claus Setzer One of the consistent themes of the German Book Prize that only emerge retrospectively is that exploration of the GDR and its demise in 1989 plays a major role in several award-winning novels. However unlike Eugen Ruge or Ursula Krechel, Lutz Seiler is not telling an epic story – what he’s doing is using a really clever trick: instead of putting his hero Edgar in Berlin or an alternative city to experience the end of the GDR, he puts him on the island of Hiddensee where he works as a pot-washer on the outer margins of the GDR and of society. Edgar becomes friends with Alexander Krusowitsch, nicknamed “Kruso”, and the two of them find a kind of inner peace beyond the surveillance state.

With Kruso, Seiler has managed to produce a work of art that has become a rarity in German contemporary literature: he is a recognisable person, a character with all his contradictory aspects almost as you might expect in a 19th century realist novel – yet never old-fashioned. Kruso is not a role model and despite his anarchistic tendencies does not represent a particular principle: he’s just a person. Creating this kind of character is something that German authors are rarely brave enough to attempt – unlike writers in English-speaking countries, for instance. 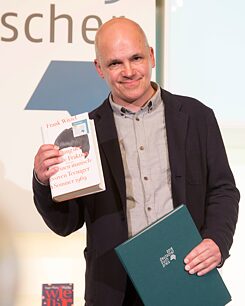 Frank Witzel | Photo (detail): © Claus Setzer / Börsenverein The world of the child narrator brings the cosmos of the old Federal Republic back to life again. Die Erfindung der Roten Armee Fraktion durch einen manisch-depressiven Teenager im Sommer 1969 (The invention of the Red Army Faction by a manic-depressive teenager in the summer of 1969) is not an easy novel to read, spanning over 800 pages filled with collages, snippets of fiction and reality, far-fetched tales, narrative and report-style sections. All the ideas mixed up in the head of the 13 year-old main character.

Critics were impressed, copies were selling fast – but whether or not the volume was actually read by its buyers is unknown. But with this novel there’s something you can do that really you could do with any book but here it’s pretty much essential: you can skip or skim entire chapters in order to immerse yourself even more deeply in others (for example the fascinatingly idiosyncratic interpretation of the Beatles masterpiece “Sgt. Pepper”). It’s a book reminiscent of a lucky bag. 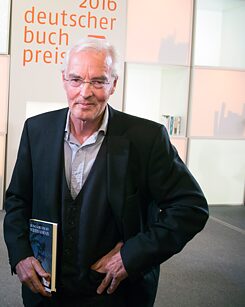 Bodo Kirchhoff | Photo (detail): © Claus Setzer Widerfahrnis (Encounter) with its somewhat intense original title is another story of a sixty-something man, who is visited one evening by a woman not a great deal younger. She spontaneously convinces him to go travelling with her. Together they head for southern Italy. Bodo Kirchhoff intertwines the destiny of the aging publisher with the story of a refugee girl; the plot is somewhat over-engineered and weighed down with a lot of reflection, yet the story somehow manages to portray the collision of two realities effectively.

The fact that the substantial novel Die Liebe in groben Zügen (Love in Broad Strokes) by Bodo Kirchhoff, now considered one of his most important works, never even made it to the shortlist in 2012 ranks amongst the most puzzling of decisions by the jury to date. Maybe they realised too late what a masterpiece they were relegating to the also-rans. A rather clumsy attempt to make good this mistake was undertaken four years later, when Kirchhoff received the Book of the Year award for his short story Widerfahrnis, one of Kirchhoff’s less important works. 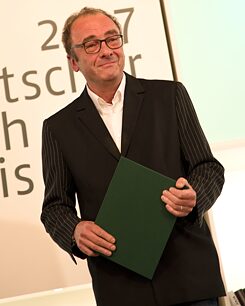 Robert Menasse | Photo (detail): © Christina Weiß In his novel Die Hauptstadt (The Capital), Robert Menasse achieves that rare work of art – an entertaining and pithy read that allows the reader to understand more about the subject portrayed than ten thick reference books. In this book Brussels symbolises the convoluted, labyrinthine institutions of the EU and all the people who work, create intrigue, fall in love, suffer and despair within its confines – it’s a behemoth that devours individuals.

Although the reader learns and understands, they are always left with a slightly bitter aftertaste: all these figures are holders of office and do not appear especially three-dimensional. They fulfil a purpose that involves depicting the EU situation rather than exploring their characters – ultimately the novel does lack epic impact in this department. 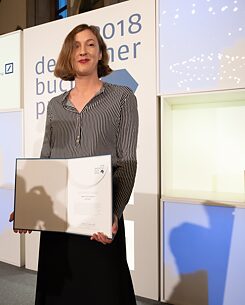 Inger-Maria Mahlke | Photo (detail): © Sascha Erdmann This novel is one of those award-winning works not destined for a long onward life. Inger-Maria Mahlke takes us backwards through a century full of change and upheaval on the island of Tenerife, probably the first work of its kind in the German contemporary literature scene. The author skilfully examines the historical events that took place between 1919 and 2015, especially Franco’s dictatorship, according to the jury.

Old-fashioned though it might sound: Archipel (Archipelago) is totally unsuitable for readers who “want to know what happens next”. And it gets worse – the achronological narrative structure means the reader is always a step ahead of the book characters. Sometimes that’s a good thing – but at the end of the day interest does wane a little and the underlying reason behind the process is not immediately apparent. 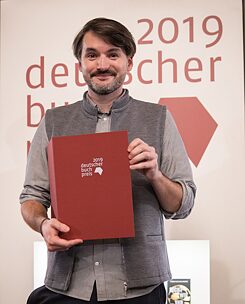 Saša Stanišic | Foto (Detail): © vntr.media / Sascha Erdmann The winner of the 2019 award certainly didn’t write the most ambitious novel in literary terms in Herkunft (Where You Come From), but this time the jury – somewhat exceptionally – selected a highly accessible, in parts surprisingly humorous work. Which doesn’t change the fact that it frequently brings a tear to the reader’s eye – such as the parts about the grandparents or the boy’s love for his club, “Red Star Belgrade”, where at the last major team game in the European Cup just before the start of the civil war people from all over Yugoslavia came together again on the pitch and in the grandstands at the stadium, and the boy takes his country’s future for granted – but just a few weeks later the inhabitants of that country start killing each other.

In this way many impressions combine to form a portrait of the lost Heimat (homeland), but equally of an uncritical and in no way bitter image of Germany as an immigration country. This is why Stanišic also quite deliberately talks about Heimat in the plural form in his book, which is part novel, part autobiography and very often just exquisitely imaginative storytelling. 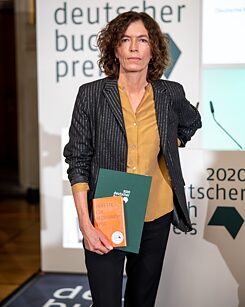 Anne Weber | Photo (detail): © vntr.media Anne Weber’s book Annette, ein Heldinnenepos (Epic Annette) on the other hand is a highly artificial epic poem in unusual language about a woman who fights in the French Resistance and having saved two young Jews receives the honorary title “Righteous among the Nations” after the war. But the unfaltering Breton, who worked as a neurophysiologist, was also an inconvenience in her own country and became involved in the Algerian independence movement, for which she was jailed for ten years in 1959.

Weber writes in verse, and whilst not rhyming it is rhythmically structured throughout to create a distance in which she maintains a clever balance between admiration of the headstrong woman and questions about the limitations of life in an ongoing state of resistance against the prevailing circumstances. The truth is that for Anne Weber – who has lived in Paris for many years – this is not primarily about writing a biography, it’s about an exemplary life, an individual constantly coming to terms with the society in which they live.