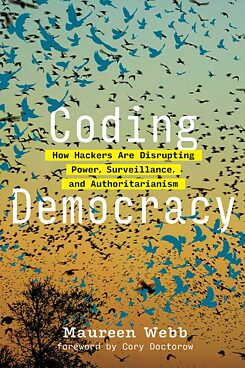 Hackers have a bad reputation, as shady deployers of bots and destroyers of infrastructure. Maureen Webb would like to offer another view. Hackers, she argues, can be vital disruptors. Hacking is becoming a practice, an ethos, and a metaphor for a new wave of activism in which ordinary citizens are inventing new forms of distributed, decentralized democracy for a digital era. Confronted with concentrations of power, mass surveillance, and authoritarianism enabled by new technology, the hacking movement is trying to “build out” democracy into cyberspace.

Maureen Webb is a human rights lawyer and activist. She has spoken extensively on post-September 11 security and human rights issues, most recently testifying before the House and Senate Committees reviewing the Canadian Anti-terrorism Act. In 2001, Webb was a Fellow at the Human Rights Institute at Columbia University in New York. A litigator for some of the first constitutional cases heard under Canada’s Charter of Rights and Freedoms, including the landmark freedom of association case, “Lavigne, “and a case challenging the powers of Canada’s newly instituted spy agency, CSIS, she sits as co-chair of the International Civil Liberties Monitoring Group. She is also the Coordinator for Security and Human Rights issues for Lawyers’ Rights Watch Canada. She is the author of Illusions of Security: Global Surveillance and Democracy in the Post-9/11 World published by City Lights Books and has taught national security law as an Adjunct Professor at the University of British Columbia.