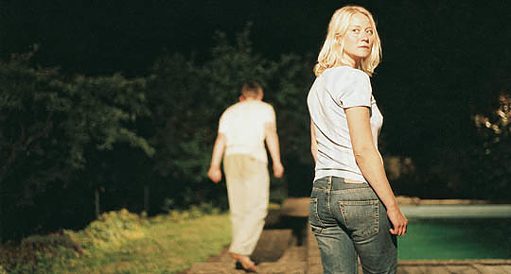 GOETHE FILMS presents three celebrated German filmmakers before their Cannes successes. What did Maren Ade create before her Oscar-nominated absurdist comedy-drama TONI ERDMANN? Which film brought Valeska Grisebach multiple awards before WESTERN took global cinemas by storm? Where was Ulrich Köhler before IN MY ROOM and international retrospectives?

Ulrich Köhler was at the Cannes Film Festival in 2018 with IN MY ROOM.

BUNGALOW follows 19-year-old Paul, who is doing his military service but deserts from the army on the way back from a maneuver. Absent without leave, he hides in his parents' bungalow in the middle of nowhere. Paul becomes more and more apathetic, only occasionally his suppressed aggressions break out. When Paul's older brother Max also visits the bungalow with his girlfriend Lene, tensions heat up between the two brothers, as the fraternal conflict soon turns into a competition for Lene.

"Köhler´s films are distinctive in how they double as provocative and plausible thought experiments." - BFI British Film Institute

"Scriptwriter and director Ulrich Köhler showed an astonishingly sensitive and empathetic film debut with reduced, downright bleak images: the portrait of a teenager searching for his own identity, who sees the great riddle of being loved with simple means, without music, effects and explanations." - Kino.de

Ulrich Köhler was born 1969 in Marburg. He studied art in Quimper in France, philosophy in Hamburg and subsequently attended the faculty of Visual Communication at the Hamburg Academy of Fine Arts. He made five short films before directing his feature film debut BUNGALOW, which was shown in the Panorama section of the Berlinale in 2002. His feature film SLEEPING SICKNESS celebrated its premiere in competition at the 61st International Film Festival Berlin and won the Silver Bear for Best Director. He was honoured with a BFI mini-retrospective in March 2019.

The Berlin production company Komplizen Film focuses on the development of feature films, international and high-end series. It stands behind numerous filmmakers such as Maren Ade, Ulrich Köhler and Valeska Grisebach, but also emerging artists like Xaver Böhm, who presented his debut film O BEAUTIFUL NIGHT at the Berlinale 2019. Komplizen Film produces local films for an international audience, films that take risks. They work with filmmakers distinguished by a unique signature and believe in long-term cooperation with directors.

All GOETHE FILMS are open to audiences 18+.

Part of the Goethe-Institut's focus on German film.

Other films of this series:

Language: WIth English subtitles
Price: Tickets $10 at TIFF Bell Lightbox in person or by phone (day of sales only) or online (as of 10 days prior to screening)
+1 4165935257
Program Curator: jutta.brendemuehl@goethe.de

Part of series GOETHE FILMS: Past forward - Directors before Cannes