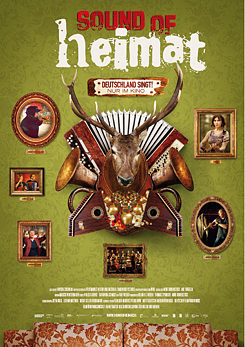 The documentary accompanies New Zealand musician Hayden Chisholm on a journey through Germany on the traces of its folk music or Volksmusik. With the clear and impartial view of an outsider he approaches German culture via melodies and lyrics, coming across an astounding diversity of traditional as well as modern regional customs and activities. His encounters include the Leipzig "GewandhausChor", a pub band named "Singender Holunder" (Singing Elderberries), Cologne Hip Hop band "BamBam Babylon Bajasch," a yodel teacher from Allgäu, rock singer Bobo and the sisters of "Wellküren," who combine folk music and cabaret.

“The musical roadtrip SOUND OF HEIMAT rocks. Those curious about the traditional heritage of songs in Germany find highly interesting approaches in this documentary.” – brutstatt.de

Arne Birkenstock, born in Siegen, West Germany, in 1967, has been working as a filmmaker since 1994. He has written and directed countless shorts and TV documentaries, including UNTER DEUTSCHEN DÄCHERN, as well as the award-winning documentary CHANDANI: THE DAUGHTER OF THE ELEPHANT WHISPERER (2010). He has also been playing the accordion in tango, zydeco and chanson ensembles. His first cinema feature 12 TANGOS – ADIOS BUENOS AIRES (2005) was followed by SOUND OF HEIMAT (2012). Birkenstock took Toronto’s Reel Artist Film Festival by storm with his art crime doc BELTRACCHI - THE ART OF FORGERY (2014).

Jan Tengeler, born in Kiel, North Germany, in 1969, studied German, Philosophy and Sociology in Cologne. He was trained as a musician and is a member of several symphony orchestras and jazz bands. Since 2002 he has been developing music documentaries for German television together with Birkenstock.