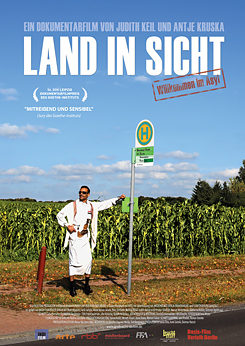 Abdul, Brian und Farid are stranded in a secluded home for asylum seekers in the small town of Bad Belzig in Germany. From there, they are looking for a way into German society. Their ideas clash with the local mentality at village festivals, in government offices and night clubs. Instead of evoking consternation, LAND IN SIGHT focuses on the involuntary humour of those encounters.

“Without a moralizing undertone but with lots of empathy for the protagonists, LAND IN SIGHT makes a case for something that should be taken for granted: to see the individual behind the anonymous numbers of the refugee statistics.” – Kino Zeit

Antje Kruska was born in 1973 in Dortmund. She studied Journalism, Spanish, Sociology, Nordic Languages, and Theater Science, and interned at ZDF TV.

Judith Keil was born in 1973 in Straubing and studied German Philology, Journalism, and Theater, Film and Television Studies. She has worked as an assistant director for theatre and film productions.

In association with Germany @ Canada 2017
Partners from Immigration to Innovation

Related Screenings:
"PEAK” by Hannes Lang
"FORGET ME NOT" by David Sieveking