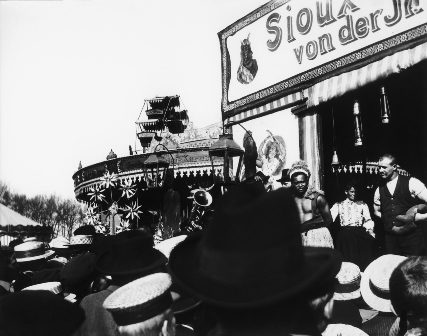 © Estate of Heinrich Zille; courtesy Schirmer/Mosel Heinrich Zille (1858–1929) was a pioneer of social documentary photography and is often called the world's first "street photographer." Most famous for recording Berlin's contradictory vibrancy and precariousness at the beginning of the 20th century with a hand-held camera, he also captured the cultural idiosyncrasies of the times, for example in snapshots of Wild West shows as popular fairground attractions.

The Goethe-Institut presents two of Zille's images, taken in 1897 and 1900, depicting “exotic” live displays of indigenous people. The photos are based on prints taken by Thomas Struth in 1985 from Zille’s original glass plate negatives.

“Fun Fair” is part of a Goethe-Institut Toronto series of investigations of “the Other”, exploring how we identify and segregate ourselves, how we learn about and unlearn from each other. The works are accompanied by a reading room that includes an exclusive essay on the fairground photos by Professor Gerald McMaster, OCADU, and an aesthetic appreciation of Zille's work by Jeff Wall and Roy Arden, as well as the ethnological documentary THE TRIBES OF COLOGNE by Anja Dreschke.


“There is a third Zille, and he is my favourite. He is neither humorist nor satirist. He is an artist to the core. Some lines, a few scratches, a little bit of colour – and it’s a masterpiece.” – Käthe Kollwitz

Heinrich Zille spent his life in Berlin. In 1877, he began to do drawings notable for the social criticism they expressed. From 1894 he photographed the streets of the German capital, popular festivals and artist studios.  If his drawings were often sentimental, his photography can be considered pioneering. He was one of the inventors of street photography. Joining the avant-garde art scene, Zille met many distinguished artists, including Max Liebermann, August Gaul, and Käthe Kollwitz. From 1901 on, he showed work regularly with the Berlin Secession, and as Liebermann's protégé, Zille became a member. He now worked mainly on drawings for satirical journals such as "Simplicissimus". In 1924 Zille was made a member of the Prussian Academy of the Arts and appointed professor. Since 2002 the Zille Museum in Berlin has been a permanent home for the œuvre of "this man, who is the purest incarnation of Berlin" (Kurt Tucholsky).

Thank you to Schirmer/Mosel Publishers, Munich.