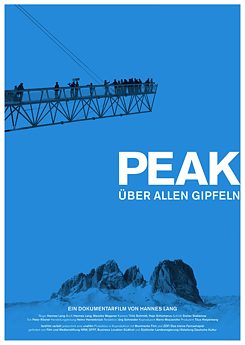 Co-presented by the Istituto Italiano di Cultura, the Italian Film Festival and Planet in Focus

The film looks at the constant transformation of holiday resorts and the lives of farmers along the South Tyrolean Alps. The region struggles with issues ranging from mass tourism to lack of snow resulting from climate change. Artificial snow with high production costs is used to perpetuate the image of a winter paradise. However, depletion and over-exploitation leave their traces in nature.
A factual documentary about dying mountain villages, mass attractions and the enduring fascination of the Alps.

“A top film about the après ski post-apocalypse.“ – critic.de

“With PEAK, Lang impressively shows the current changes in the Alpine regions, for as rigorously as humans take action against nature with their technology, nature reclaims inch for inch in another corner, in which whole cultures are one the verge of extinction.” – cinetastic.de

Hannes Lang, born in Brixen, Italy, in 1981, majored in Media and Documentary at the Academy of Media Arts Cologne. While studying, Lang made several documentary shorts such as DER SCHNELLE BRÜTER (2008), a film about a theme park located in a German nuclear power plant that was built in 1985 yet never in operation. In his graduate film LEAVENWORTH, WA (2008) Lang portrayed the eponymous American small town turned into a Bavarian village, attracting tourists from around the world.

At the documentary film festival DOK Leipzig 2011, Lang presented his first full length film, PEAK. His second full-length documentary I WANT TO SEE THE MANAGER (DE/IT 2014) continues in that vein and elaborates on changes inflicted by globalization around the world.

In association with Germany @ Canada 2017
Partners from Immigration to Innovation

Related screenings:
"LAND IN SIGHT" by Judith Keil & Antje Kruska
"FORGET ME NOT" by David Sieveking