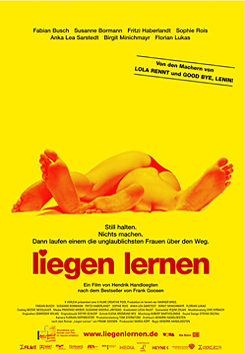 LEARNING TO LIE (Germany, 2003, 94 min, 35mm), directed by Hendrik Handloegten, based on the book by Frank Goosen, with Fabian Busch, Susanne Bormann, Fritzi Haberlandt, and others

Helmut is a shy, awkward teen, and a bit naïve when it comes to girls. When Britta, the most gorgeous girl in his class, finally notices him, he falls for her hard. Then she suddenly announces that she is moving to the United States to live with her father. Years later, Helmut stumbles from one failed love affair into the next…until Tina. A smart, independent woman, Tina doesn’t fall for the hustle, she sees Helmut for who he really is. After two blissful years together Tina becomes pregnant. Helmut panics and runs without even understanding why. What he does understand is Tina’s ultimatum: It’s all or nothing, and he cannot imagine losing her. Sensing that there is still something to finish, he needs to see Britta one last time.
Set in writer Frank Goosen’s hometown in the industrial Ruhr region, the drama perfectly captures a West German youth in the 80’s.

”Goosen wrote a wonderful novel, sentimental without being awkward. It is exciting and touching despite its ordinariness. The author succeeds in authentically depicting the joys and sufferings of first sexual encounters as well as the melancholy, dreariness and apathy of the 80’s. The story warms the hearts of those readers growing up at this time.” – Rolling Stone

Accompanied by a reading and Q&A with author Frank Goosen.

Hendrik Handloegten was born in 1968 and studied at the German Academy of Film & Television (dffb) in Berlin. His graduation film, PAUL IS DEAD, went on to win numerous awards including the prestigious Grimme Award in 2001, as well as earning him an invitation to the renowned Slamdance Festival. In 1999, together with Achim von Borries, Handloegten also worked on the screenplay for Wolfgang Becker’s global success GOOD BYE, LENIN!. LEARNING TO LIE was adapted to the big screen by Handloegten from Frank Goosen’s best-selling novel “Liegen Lernen.”

Frank Goosen was born in Bochum in 1966. His breakthrough was the novel “Liegen Lernen”, which long topped the bestseller lists. In 2003, Goosen won the Literature Prize Ruhrgebiet. He regularly tours Germany with his cabaret programs. His collection of stories “Radio Heimat” about the Ruhr Area made the top 10 bestseller lists. He lives in Bochum with his wife and two children.