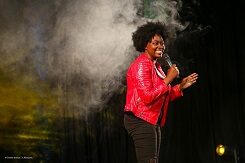 Sylvanie Njeng was born in 1996 in Mbalmayo, Cameroon. As a young comedian, she started doing stand-up comedy in 2017 after participating in the Valery Ndongo Comedy Club. Shy but passionate about writing, She wrote and directed her first solo show entitled "Adult Chapter Zero" which is a journey into the psychological world of young people and their relationship to the opposite sex.