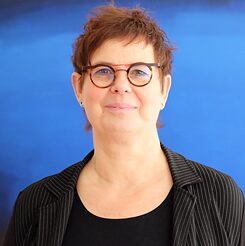 Bettina Paust is the Director of the Cultural Office of the city of Wuppertal and has published the “Joseph Beuys Handbook”. | Photo (detail): © privat Ms. Paust, just in time for what would have been Joseph Beuys 100th birthday, the Bündnis 90/Die Grünen party has a promising chancellor candidate running in the Bundestag election for the first time. It almost seems like a posthumous affirmation of the party’s co-founder, Beuys, who was instrumental in setting up the Green Party in 1980 that later merged into Bündnis 90/Die Grünen after German reunification. Was Beuys actually a dedicated Green?

In the early days, the Green’s platform had not yet been clearly defined, but that wasn’t what Beuys was after at all. He was more interested in finding a way to bring about social change through art. This meant he was focused on issues that were and are still central to the Greens, such as environmental protection, or climate protection today. Beuys wanted democracy to be effective because he had grown up in a time when democracy was a foreign word. Socialised under National Socialism, he was a member of the Hitler Youth, and volunteered for military service as a soldier during World War II. In the 1950s, he sought ways to use art to advance understanding and action for a better world. That is when his ideals matched up with the Greens. Beuys explored how we might shape the world to raise our awareness of sustainability and of action designed to serve the common good, topics he addressed in his art.

How does his political commitment fit with the fact that he met with former Nazi comrades-in-arms?

Every now and then, he took part in smaller meetings with former war comrades. Perhaps it is a good symbol of how complex Beuys was, the contradictions inherent in his character. But I think accusing him of being a Nazi sympathiser goes too far. His utopia of social sculpture takes the exact opposite approach, and values trusting every human being with the ability to participate in the development of a society in a positive way. This is the antithesis of fascist ideology.

Another facet is his closeness to anthroposophist Rudolf Steiner. Some critics accuse him of an affinity for esotericism. Is that the case?

Beuys was not an artist who can be easily defined. He created a huge cosmos from the most diverse fields of knowledge. Anthroposophy was a central element of this, and he sometimes took Steiner quite literally. Also, secret sciences like alchemy or shamanism and other not rationally explainable concepts played a big role in his work. His central criticism of the development of the Western industrial societies of the 20th century was, in short, that they were too strongly influenced by the ratio and materialism. Beuys was not an esotericist; he was far too much of a pragmatist for that.

Similarities to the current pandemic, when conspiracy theories are making the rounds and government restrictions are accused of being dictatorial, are practically impossible to ignore. Would have Beuys have joined the ranks of the aluminium hat wearers?

I do not think he would have. It would have been beyond him to distance himself as far from reality as the coronavirus deniers or conspiracy theorists have. Beuys was a clear and visionary thinker. When he said, “Now we shall overcome the party dictatorship”, Beuys turned against a politics that does not permit or even suppresses other opinions. Beuys wanted to allow everyone to express themselves freely. Although Beuys moved more and more into the political field with his art from the 1970s on, he did not see himself as a politician in the traditional sense, and consequently didn’t fit into a party structure particularly well. He wanted to use artistic means to break up entrenched party structures. This is where he ultimately failed, if we consider that his participation in the Green Party was only a brief guest appearance.

You allude to the fact that he withdrew from active involvement just a few years after the national party was founded in 1980, though he had been working toward it for a while. That was in 1982, when he wanted to run for the German Bundestag but was not top listed for candidacy. He remained a party member anyway. How would you describe Beuys’ legacy?

Beuys took art and artistic endeavours in a few new directions, such as through a new understanding of sculpture and the associated use of specific materials. As an impulse generator, his greatest legacy is two-fold: his performance pieces with living and dead animals have made him an important reference for contemporary art with living animals. His 1974 piece in New York with a live coyote was a milestone for artistic action with animals, even if some take a critical view of it today.

The last of 7,000 trees in Beuys’ “Stadtverwaldung” (Urban Forestation) being planted during the 8th “documental” exhibition in Kassel in 1987. The artist left his mark on Kassel’s cityscape to this day with this conceptual piece, turning the city greener. | Photo (detail): © picture-alliance/dpa/Schilling That was when he spent several days with a coyote in a newly opened New York gallery. The two became closer during this time.

Exactly. The other is socially engaged art – his idea of social sculpture, that ultimately states that everyone can and should influence social processes so as to promote the common good. Today, many artists and collectives take up social issues, including urban development. Beuys’ thoughts and ideas are still highly relevant – both in the context of art and far beyond. The question of Beuys’ legacy should not be about slavish adaptations of the work and the person of Beuys, but rather about the question of how we want to shape the world at present and in future. Beuys contributed some valuable ideas here.