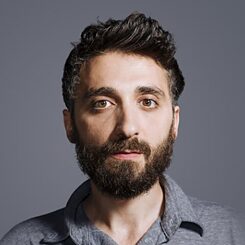 © Beetroot Prodromos Tsinikoris works as a director, dramaturge and performer in Athens. Born in 1981 in Wuppertal to Greek immigrant parents, he moved to Thessaloniki in 1999, where he graduated from the Drama Department of the Aristotle University. In 2009 he moved to Athens, where he worked a.o. as an actor with director Dimiter Gotscheff (Messenger in The Persians, National Theatre, Athens) and as assistant director and researcher with Rimini Protokoll (Prometheus in Athens, Athens & Epidaurus Festival, 2010).

Back to "New Stages Southeast"