The interactive wall installation Disappearing Wall combines quotes from European high and pop culture to demonstrate Europe’s diversity. From summer 2020, the striking installations could be seen in ten European countries. In Cyprus the Disappearing Wall was shown in October and November in Nicosia. The event in Limassol was postponed due to Covid-19 and will take place on 12 and 13 June 2021.

Whether it’s a quote from Hannah Arendt, a lyric from a Beatles tune, a line from the film Amélie, or a statement by the Hungarian Nobel Prize winner Imre Kertész, the quotes chosen in local competitions for the installations are diverse. Through local competitions a diverse selection of quotes for the installation was made. In Cyprus over 100 quotes were submitted, in Cypriot dialect, as well as Greek, Turkish, English, German and French language. Participants took part in a raffle for a German language course, a tablet and ten 50 Euro gift vouchers at bookstores. The draw took place during the lockdown on Facebook on 2020. 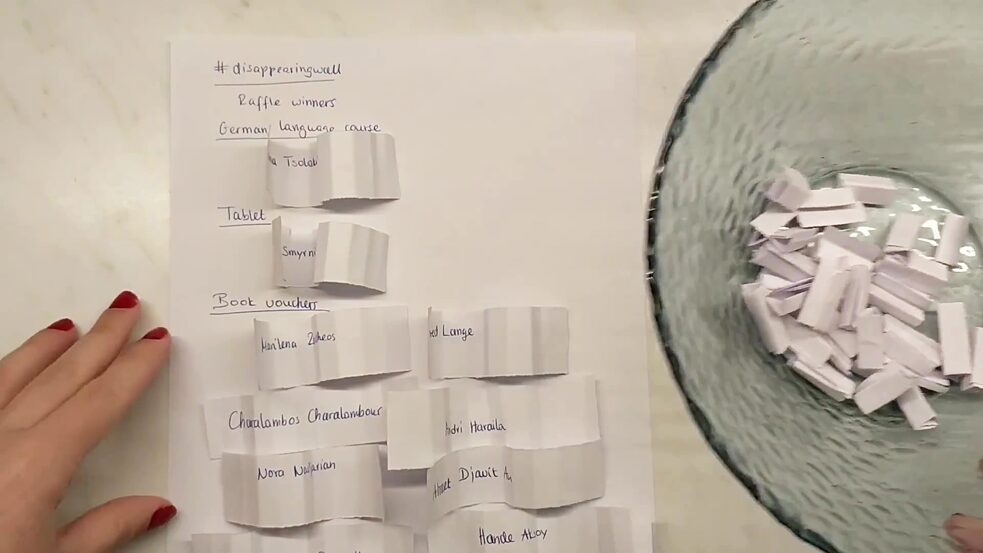 The over 800 submitted quotes from all participating countries formed a longlist. In each participating European country, a jury will select the 150 favourite quotes, which will be engraved on 6.000 wooden blocks in their original language as well as in translation.

The blocks form the core elements of the Disappearing Walls – public space installations that were set up in central locations in ten European countries from summer 2020. The countries involved include Belgium, Germany, the Netherlands, Great Britain/Northern Ireland, Poland, Lithuania, Spain, Italy, Greece, and Cyprus. This means that quotes that were submitted in Cyprus could be selected in Spain or the Netherlands or vice versa.

The Disappearing Wall took place on 2020 at Faneromeni Square and on 2020 at Sarayönü Square in Nicosia. The event that was planned on 2020 in Limassol, had to be postponed and will take place on 12 and 13 June 2021. After the installation’s unveiling passers-by are permitted to take a block of quotes home with them. All that remains is the transparent Plexiglas grid that held them: the wall disappears.

The Disappearing Wall at Faneromeni Square in Nicosia, 24/25 October 2020

The Disappearing Wall at Sarayönü Square in the northern part of Nicosia, 28/29 November 2020

The "Disappearing Wall" at Faneromeni Square in Nicosia

The "Disappearing Wall" at Sarayönü square in Nicosia

The interactive wall installation Disappearing Wall is based on an idea proposed by Maria Yablonina in a workshop carried out by the architect and engineer Werner Sobek and initiated by the Goethe-Institut.

The presentation of the Disappearing Wall in Cyprus will be accompanied by a sound installation created by the composer Nektarios Rodosthenous.

The Disappearing Wall is a project by the Goethe-Institut, supported with special funds from the Federal Foreign Office for the German EU Council Presidency in 2020.