Womanhood – Marios Ioannou endeavours to bring to the stage the universe of women. In his interview, he reveals what drew him to delve deep into the female psyche and what messages he would like to share.

How was the idea for these workshops and performance born?

The idea for Womanhood started with the passing of the first woman I met in my life. My mother. I wanted to find a way to celebrate her, since for me she was an infinite source of inspiration. She inspired me through the poems she read, the songs she sang and the drawings she made. She gave me love for people and Art and it is through Art I wished to find her again. My mother was of a kind, vibrant and lawless nature, so it was imprinted in me, that women are all this. I wanted to communicate my mother to the audience and through her, all the women of the world.

Which part of the process excites you the most?

I am fascinated by many moments of the entire experience, from both the workshops and the performance. Moments in which I see strangers come close and hug each other lovingly, from their first encounter. Moments in which personal stories are shared in an effort to find a shared voice and open our hearts. Moments in which a person, who not long ago was shy and collected, is liberated on stage. These and a thousand other moments in which we create from the heart and discover meanings that are simple yet complex. The moment in which the lights are turned on and the dialogue with the audience begins, culminating with the applause. That is the ultimate and most cathartic moment which stays with us, with me and everyone who takes part. It is an incredibly beautiful feeling of satisfaction for the effort and mental labor.

Which message do you wish to share through the performance?

When we say 'woman' it is like saying sky, or wind or earth. How do you describe the sky, the earth or the sea? You can only shine a light on them from specific angles. This is what our performance does. It puts a magnifying glass on some of the parts that comprise the vast world of women. The performance celebrates women in its own way, and in the case of Womanhood 2 it does so on the International Women's Day. Through improvisation and texts from modern and classical theatre, the vast, sweet, bitter, lawless, sensitive, wild and tough, but, at its root, always compassionate character of women arises.

The performance Womanhood reminds us that the masculine has the feminine within it. In the society of today this has been buried deep. Money and power do not speak the feminine language. This has led to even women burying deep within them the feminine. If people in power hadn't buried the feminine, which they carry inside them, so deep, then it would have been a more beautiful world.

Do you see a difference in the role of women in today's society? Or do you think some issues remain timeless?

Generally speaking, women have progressed in western societies. This is something that anthropologists and sociologists know better. What concerns me, is to ask and wonder who set up societies in the way that they function. Are they structured according to a collaboration between the masculine and feminine energy? Do they promote compassion, the hug a mother would give to all her children? Sensitivity? Have we seen many women in high positions in businesses wearing flowers and butterflies on their clothes, or have they buried them in grey to survive?

I would also like to bring into our discussion the words of Eckhart Tolle: "If the balance between masculine and feminine energy on the planet hadn't been disrupted, the development of the ego would have been largely contained. We wouldn't have declared war on nature, people would love one another and we wouldn't be as alienated from 'Being'".

I would also like to bring into our discussion the words of Eckhart Tolle: "If the balance between masculine and feminine energy on the planet hadn't been disrupted, the development of the ego would have been largely contained. We wouldn't have declared war on nature, people would love one another and we wouldn't be as alienated from 'Being'"..

Are there any similarities between the first and second womanhood? How did the public respond, as well as the participants of the first womanhood

The first performance, which was the result of the workshops, as well as the next performance, taking place at the Goethe-Institut, both follow the same type of direction. Only the material is different and this is to be expected, as different women are participating, each carrying their own experiences. The performance suggests an unstructured parade, where women step into the light with poetic cohesion. Through what they communicate to the audience, we get a quick but intense taste of the infinite world of the feminine psyche, which I mentioned earlier.

When we first staged Womanhood the audience had a very positive response. Women and men, and men and women, and everything in between. I hold dear the words of an audience member, who went to the theatre for the first time at the age of thirty. He said "If this is what theatre is like, I will go to see performances."

Participants of the first Womanhood performance at Dance House Lemesos, took with them acting knowledge, the reminder that they have the power to move their soul and the audience, and the opportunity to delve deep into the feminine psyche.

After Myths and Tales across the Divide, Womanhood is another piece in which theatre loving amateurs are the protagonists. What excites you about working together with amateurs?

Myths and Tales and Womanhood were great joys. Beautiful journeys that have given me a lot. But let me tell you, I generally work a lot with 'amateur' actors. I have a workshop in Limassol where I have been teaching almost eight years now. It is a challenge for me to empower a person who loves the stage, and in a short period of time to give them the tools to fly on stage.

It is of course also that amateur actors are more open to explore, with less guilt. Actors tend to limit themselves to what they have been told they do well. I am bored of this, both as an audience member and as a director. Let's not forget that by saying amateur, in Greek 'ερασιτέχνης' (erasitechnis), we mean the lover of the Arts. It is one thing to have feelings of love (eros) for something, and quite another to look at it professionally. Under this prism I am also a lover of the Arts, or at least I try to be.

I would like to take this opportunity to wholeheartedly thank the Goethe-Institut for giving me these great opportunities, to both give and receive through the workshops with lovers of the Arts. 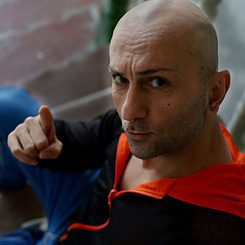 Photo: Nicolas Iordanou Marios Ioannou was born and raised in Paphos, Cyprus. He graduated from the Drama School of the National Theater in Athens in 1994, where he stayed for fourteen years. During that period, he took part in numerous theatre works.

Marios lives in Cyprus for the past years. His adaption of Gogol's Diary of a madman in Cypriot dialect has toured over the whole island and in London with great success. For this monologue he was nominated for the Theatre Awards of THOC.

In Limassol he has collaborated with the Mitos Theatre Group in dramatizing the texts of Leontios Macheras Chronicles and other devised works. Together with director Achim Wieland he created the group SRSLYyours in 2008. Their works Woyzeck by Büchner and The Fear Industry were presented on stages in Cyprus and many European cities. He collaborated with Lia Charaki in Active Spectator, which was presented so far at "The Performance Shop" in the framework of the Pop Up Festival Nicosia, in Limassol, and at the Athens and Epidaurus Festival in 2018.

In August 2017 he presented the play Uniting the Mediterranean Sea, which he wrote and directed in the framework of Pafos 2017 – European Capital of Culture, in which he also had the main role. The play is an international production with actors from five Mediterranean cities.

Marios has also starred in numerous film productions. In 2004 he won the Best Actor Award at the Thessaloniki Film Festival for his lead in Kalabush by Adonis Florides and Theodoros Nicolaides. In 2012 he received the Honorary Mention for outstanding performance for his lead in Fish 'n Chips.