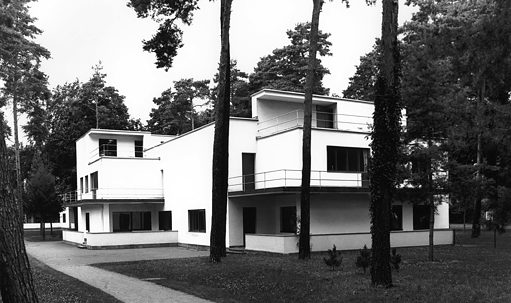 bauhaus imaginista – collected research is a comprehensive international project on the occasion of the centennial anniversary of the school with a focus on its international dissemination and reception.

From its inception, the Bauhaus was internationally oriented, students and educators came from Europe and Asia to become affiliated with the school. It was characterized by heterogeneity and at different times it assumed ideas from the arts and crafts movement, socialism, communism and spiritualism, soviet constructivism and "Neues Bauen". In 1933 the school was shut down and forcefully dissolved by national socialists, whereupon many of its members were forced to leave Germany. Subsequently, the Bauhaus spread also in countries and cultures outside Europe. In collaboration with researchers and academics from Brazil, China, India, Japan, Morocco, Nigeria, Russia and the USA, bauhaus imaginista traces this expansion in different parts of the world.

The touring exhibition unites ideas, research and documentation of bauhaus imaginista. The artist Luca Frei has developed a structure – part sculpture, part exhibition architecture – as a room, in which visitors can grapple the different levels of this project. It includes curatorial research, texts and images for each of the four chapters, as well as documentation of the international bauhaus imaginista programme from 2018.

A computer terminal where visitors can search the online-magazine of bauhaus imaginista and print photos and texts, and collate them in the available folders, has a central role in the installation.

A separate film programme shows specially made works by contemporary artists and researchers Zvi Efrat, Kader Attia, the Otolith Group and Wendelien van Oldenburgh, on subjects and stories of Bauhaus.

At the exhibition opening in Nicosia Grant Watson, who curated bauhaus imaginista, and Luca Frei, who conceived the exhibition structure, will be present and will each say a few words about this project.

Grant Watson is a curator and researcher based in London. Recent projects include How We Behave with If I Can’t Dance, Amsterdam, exploring questions of life practice and politics through filmed interviews conducted in cities including London, Sao Paulo, Mumbai and Los Angeles. Other recent curatorial projects include Practice International at Iniva, London, Iaspis, Sweden, Casco, Holland (upcoming publication 2016); and Keywords at Tate Liverpool; and the research collaborations Practice International and Tagore, Pedagogy and Contemporary Visual Cultures, which address questions of the transnational through art.

Watson has also developed several ambitious projects on textiles and textile histories in relation to contemporary art. Watson was the Senior Curator at the Institute of International Visual Arts, London (2010–2014), Curator at the Museum of Contemporary Art, Antwerp (2006–2010) and Curator of Visual Arts at Project, Dublin (2001–2006).

Luca Frei, born 1976 in Lugano, Switzerland, lives and works in Malmö, Sweden. His work, which includes a wide range of media such as drawing, collage, painting, installation, performance, video, and photography, often develops in response to a specific context in the form of architectural interventions, narrative environments or exhibition structures that invite public participation and dialogue. His consistent thematic preoccupations encompass the measurement of time, the relationship between the body and architecture, as well as the juxtaposition of private and public spaces.

Luca is Associate Professor of Basic Studies at the School of Visual Arts and the Royal Danish Academy of Fine Arts in Copenhagen, Denmark. Among others, Frei has had solo shows at Barbara Wien, Berlin; Kunsthaus Glarus; the Bonner Kunstverein; and the Lunds Konsthall along with participation in numerous biennials such as the Cairo Biennial; the Prague Biennial; the Istanbul Biennial; and exhibitions at the Edinburgh City Art Centre; Van Abbemuseum in Eindhoven; Centre Pompidou in Paris; and Moderna Museet in Stockholm. Recent exhibitions include Malmö Konsthall; Azkuna Zentroa Bilbao; Tate Liverpool; MHKA, Antwerp; and Nottingham Contemporary.

For Corresponding With Luca will conceive a ‘representation’ or artist’s impression of the Bauhaus-related exhibition produced by Renshichiro Kawakita in collaboration with Takehiko Mizutani at the Tokyo Academy of Arts in 1931. This new work will include a sculptural installation with photographic documentation and a sound element. Frei is also developing the design of exhibition furniture for this chapter.

Fivos Polydorides – representative of Cyprus modernism
Limassol-based architect Fivos Polydorides is among the Cypriot modernist architects. His work presented and celebrated in this small exhibit, attempts to create a link between architecture in Cyprus and the Bauhaus movement.

At the exhibition opening, a short discussion will take place between architect Alexis Papadopoulos and Fivos Polydorides, about architecture in Cyprus through the years.

With a warm thank you to Fivos Polydorides, for kindly providing us his archive material.

Chronos contemporary music ensemble takes us on a musical journey through time with contemporary pieces by European composers of the Bauhaus era.