Rojda is a young German soldier with Kurdish-Iraqi roots who has lived in Germany since childhood. She is now looking for her mother Ferhat in a Greek refugee camp to take her to Germany. When the two finally find each other after so many years apart, they are overjoyed. But Rojda learns that her sister Dilan is still in Iraq. When Rojda finally reaches her sister and Dilan mentions Kurdish fighters, Rojda is filled with fear. She decides to request a redeployment to Erbil in Iraq so she can find her sister. Once there, Rojda quickly wins the trust of the female fighters. But the more intensely she searches for her sister, the more she becomes caught between the two sides. 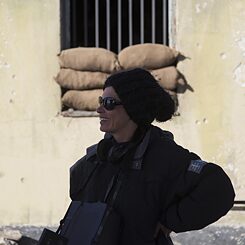 Born in Thessaloniki, Greece, she grew up in Greece and Germany. She studied stage design in Paris, and politics in Hamburg. Her documentary Make Up screened in the 1999 Berlinale Forum and won the Hessian Screenplay Award. In 2003, her feature film Madrid was nominated for the screenplay award in the New German Cinema section of the Munich film festival and won the Hessian Film Award. With the screenplays Der Architekt (The Architect), co-written with Ina Weisse, she won the Screenplay Award at the 2009 Max Ophüls Award film festival.