LOOKING at / with / for / after ONE ANOTHER
Response Lizzie Collingham

‘Imagine the ships as seed pods sailing away from Africa, and much like a pod from a tree floats on a river to dry land to insert itself into the earth, take root and grow, under the harshest of conditions we have been planted, we are still here’.

Ehler’s words carry an echo of the legend that an enslaved African woman brought rice seeds to the Americas by hiding them in the tight curls of her hair. In eighteenth-century South Carolina it was as if not just the people of West Africa but the West African landscape itself had been torn from its moorings and transplanted to North America.

When in 1685 the French slave trader Sieur Michel Jajolet de la Courbe travelled along the Geba River in Guinea-Bissau, he noticed that all along the river there was an extensive system of dykes and rice paddies. Indeed, a complex network of canals running the length of the Senegambian coast harnessed the tidal movements of the rivers in order to irrigate and drain rice paddies. One hundred years later the entire system had been expropriated. In West Africa the embankments and canals had fallen into disrepair and coastal rice cultivation had all but disappeared; the farmers had either been captured or fled inland. Meanwhile, in South Carolina slave labourers had been set to work to fell the gum and cypress trees, grub up their roots and – up to their knees in soft mud, up to their waists in dirty water – dig a system of dykes and embankments which transformed the Carolina swamps into productive paddy fields. The white plantation owners reaped the rewards. On the eve of the American Revolution South Carolina’s rice planters were the wealthiest of all the American colonists: four times richer than Virginian tobacco planters, ten times richer than New Englanders.

It was not just rice that the Africans brought to America. The slave ships served quite literally as seed pods for a host of African plants: sesame, calalu greens, okra, black-eyed peas and watermelons. These food crops also laid down their roots in the American soil, grown in the small garden plots that the slaves were allowed to keep to supplement their measly rations of salt cod and cornmeal. The Africans who worked in the kitchens of the plantation houses taught the whites to appreciate their food. When in the 1840s the women of Charleston were asked to contribute recipes for a cookbook (The Carolina Housewife) they included distinctively African dishes such as gumba, okra, peanut and sesame soups. The ladies had even learned from their African cooks that these were best simmered in a pottery rather than an iron vessel. Now, when southern Americans mop up the ‘pot likkor’ at the bottom of a pan of leafy greens or eat Hoppin’ John (rice and black-eyed beans) for luck on New Year’s Day they are relishing the culinary legacy of the African slaves.

African food became integral to American culture. The culinary exchange was two-way. When the glamorous African slave trader La Belinguere entertained Sieur de la Courbe to a meal, the rice dish was flavoured with American chilli peppers and dessert was the strange new American fruit, the pineapple. More importantly, American maize became an African staple, displacing millet and sorghum in many areas. Today those Africans who talk of maize ‘as the food their ancestors’ would be surprised to learn that maize was introduced to the continent in the sixteenth century. Colonialism was a great engine of transplantation, transporting agricultural systems and landscapes, plants and people around the globe. All over the world imported foods have been reinterpreted as ‘national’ dishes: a crock of (West Indian) molasses kept on the table as a condiment suitable to add to any dish from chicken stew to brown bread, defines the householder as a proper Newfoundlander; the Jamaican national dish is (Newfoundland) salt cod and (West African) ackee; Indians can barely imagine cooking without the (American) chilli while the British lay claim to an Indian curry as their national food. If nations’ human populations are the product of migration so too are their cultural and culinary identities. 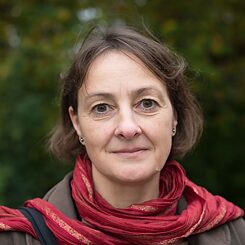 © Terry Roopnaraine Lizzie Collingham is a historian interested in linking the minutiae of daily life to the broad sweep of historical processes. She is the author of Imperial Bodies: The physical experience of the Raj; Curry: a tale of cooks and conquerors; The Taste of War: World War II and the Battle for Food and The Hungry Empire: how Britain’s Quest for Food Shaped the Modern World. She taught History at Warwick University and was a Research Fellow at Jesus College, Cambridge. She is now an independent writer. She was commissioned to write Around the First Table, the 'kitchens volume' for a project designed to make the Indian president’s palace (formerly the Viceroy’s House, New Delhi) accessible to the wider public. She is an associate fellow of Warwick University’s History department and has just published The Biscuit: the History of a Very British Indulgence. She works in a garden shed near Cambridge.

Back to "Europe's kitchen"