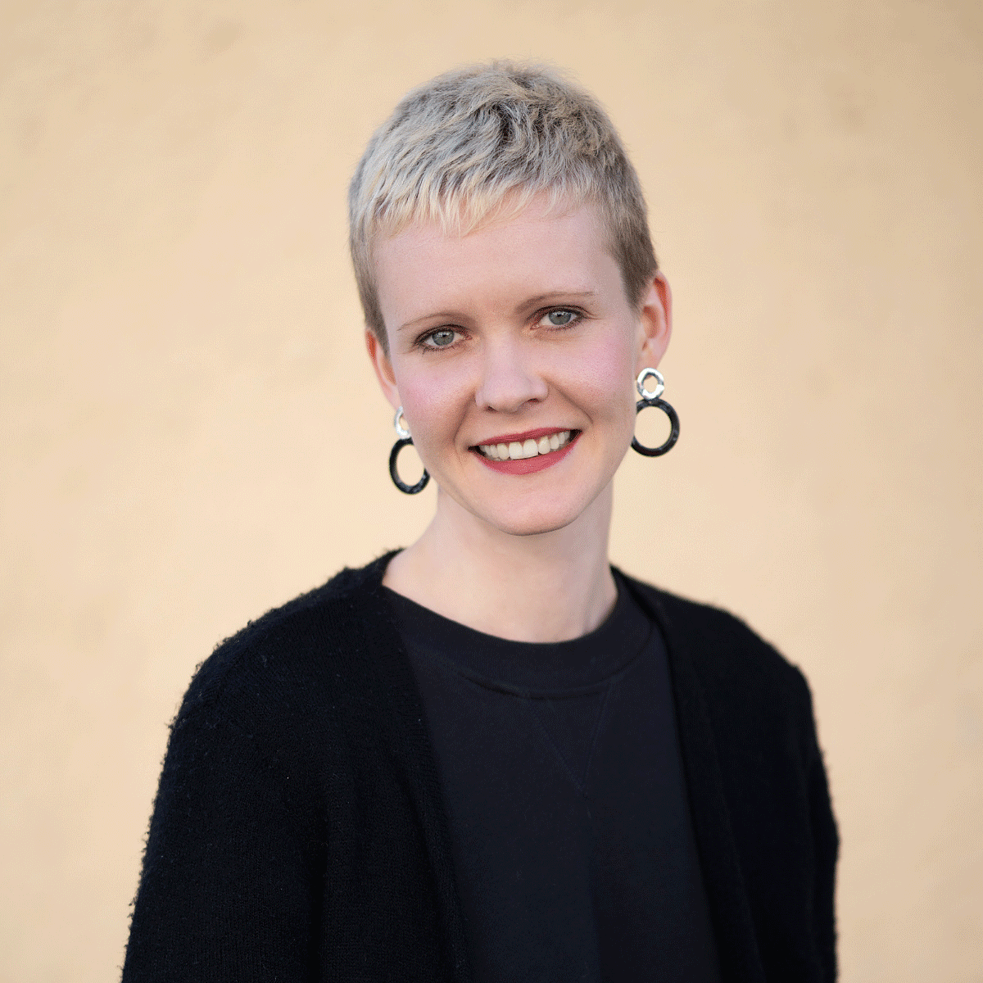 In her research, Junior Professor Nina Simon dealswith the question of how teaching materials contribute to reproducing racism. In this interview, she explains the potential and dilemmas of teaching German as an additional language and reflects on textbooks that promote diversity, equality, and inclusion from a perspective critical of racism.

The invention of human ‘races’ goes back to European colonialism. ‘Races’ were invented at the time and put into a hierarchy to legitimize the colonial system. Racism is thus a power relationship, and like all hierarchical relations, it is based on a binary distinction. In racism, this binary is between white and Black people [1], who are positioned differently within this relationship: Black subjects are marginalized; white subjects are privileged.

Often racism is reduced to situations where one person is racially discriminated against by another. In this view, racism is limited to the individual level. Claus Melter and Paul Mecheril [see end references, ed.], developed the concept of critiquing racism to extend beyond the individual and include the structures and discourse. Racist discourse can be found not only in textbooks, but also in films, for example if we ask who is portrayed, and how, or who is not. Since racism, like other power relations, structures our society, and since everyone is part of society, everyone is also involved in racist relations. This is another important difference from the concept of anti-discrimination, which implies that you can step outside these structures if only you take a strong enough stand against racism. But racism-free spaces do not exist. Therefore, labels like the German Racism-Free School are problematic in terms of critical race theory.

In the school setting, it is about becoming aware of how racism works. To avoid reproducing these structures and discourses without thinking, we have to recognize that everyone is involved in them.

To what extent does this play a role in learning German as an additional language (DaF)?

In the DaF context, all this plays a role in several ways. It is not possible to answer the question of who is privileged and who is marginalized by racism in general in DaF contexts, as this question always depends on the context. Privileged and marginalized positions have always emerged in history and discourse. So they do not exist independent of context. For example: If you travel to Zimbabwe as a Black person with a German passport, you are whiter than your Black colleagues there because you have the more privileged position of holding German citizenship. The artistic director of the Dortmund Theatre, Julia Wissert, once described this beautifully. The very readable novel Identitti by Mithu Sanyal is also about this relational nature of identity.

In the context of DaF, we need to keep reminding ourselves about how complex and relational identity is. At the same time, we can take the opportunity to reflect on identities.

So for DaF teaching, this is an opportunity and a risk?

As I said, I see a great potential: DaF can be taught anywhere in the world. This makes it possible to reflect on power relations and identity positions in countless contexts, which can make critiques of racism more complex. Reducing complexity is a key characteristic of racism. So, by increasing complexity, we are also fighting racism. Institutions such as the Goethe-Institut or the German Academic Exchange Service (DAAD) are particularly well placed to increase this complexity because they operate worldwide. They are not limited to a local context, like state schools. Of course, this does not mean that state schools cannot and should not use critical race theory.

The history of learning German as an additional language, and the fact that people do this all over the world, is very closely interwoven with colonialism. Besides increasing complexity, I see the greatest potential in drawing attention to the fact that DaF and thus institutions like the Goethe-Institut are highly ambivalent. DaF continues to contribute to the treatment of German as a valuable language that is privileged over other languages. This is problematic from the perspective of critical race theory, because it perpetuates power relations that arose from colonialism. At the same time, DaF makes something possible. It is very important that we put this ambivalence at the heart of our reflections. It is not only central to postcolonial theory, but also important in the light of current social discourses that tend to flatten ambivalence.

How does the teaching material reveal power relations? How should teachers deal with this?

Diversity awareness is increasingly being taken into account in textbook design. Not so long ago, textbooks usually only depicted privileged subjects: white subjects, heterosexual subjects, or subjects privileged in terms of class. These representations in textbooks have a very strong effect, especially if they are not critically reflected on in the classroom.

But I don’t think that textbooks that take diversity, equality and inclusion (DEI) seriously are enough to criticise and dismantle racism and power relations. We can still deliver good DaF lessons with conventional textbooks that have not been written with DEI in mind. To do this, teachers need to be appropriately trained to critically question these textbooks with the learners, including examining their representations of power. There are two risks involved in giving a textbook the DEI stamp. First, it could give the impression that everything has been achieved and therefore  teachers no longer have to think about how they themselves and their students are involved (differently) in social power relations and that this makes it necessary to consistently reflect critically on teaching practice. Second, the practice of deconstruction can only be learned if there is something to deconstruct. This is exactly the practice I believe is key to teaching German as an additional language.

What can teachers look for to critically analyse their material?

From whose perspective is a story told? Who is the object, who is the subject? Who has what profession, what goals? Who takes which role? These are questions teachers should ask themselves about their material. There are guidelines to support this continuous process of reflection, like the German Authors’ Collective Critical Race Theory Guidelines. These can be used not only interrogate existing teaching materials, but also to create new ones. A lot of questions in the guidelines can be applied to different levels and media, not only in relation to racism, but also to other intersectional encounters.

However, analysing the material cannot replace self-critical and power-critical reflection on one’s own involvement in social power relations. This process is lifelong and thus much longer and more intensive than familiarizing oneself with DEI textbooks.

Can you explain that in more detail?

It’s a lifelong and intense process because we have to unlearn existing privileges that we grew up with and take for granted, as postcolonial theorist Gayatri Chakravorty Spivak puts it. And we can’t replace all that unlearning with materials or two-hour workshops. Both can be a productive starting point, but the process of unlearning in and of itself is ongoing. To begin with, I need to understand what racism is and how I am positioned within racist relations. Only then can I ask myself: What does this mean for me as a teacher, for my teaching practice, for the people I teach? I often find teachers get frustrated when they are supposed to learn how to use critical race theory in two hours, which is barely enough time to explain what racism is. We must not forget that education takes time and unlearning as a specific educational process probably takes even longer. Self-reflection takes energy, it can be uncomfortable, and it needs space.


[1] The spelling of white and Black is based on Amnesty Germany’s recommendations on inclusive language.

The Expert
Dr Nina Simon has been Junior Professor of German as an Additional Language, focusing on cultural studies, at the Herder Institute of the University of Leipzig since April 2021. In her work, she takes a social theory and reflexivity approach to German as an additional language and cultural education. Currently she is researching the interaction of knowledge (production) and power relations, (subject) education processes, qualitative reconstruction and discourse analysis in the context of teaching and learning German as an additional language.