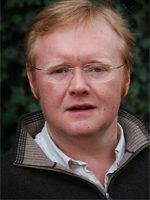 His most recent works include The Sweetness of Life by Paulus Hochgatter for Quercus and Ruth Maier's Diary for Harvill Secker. Peirene has selected him for the translation of Portrait of the Mother as a Young Woman because his sample translation received unanimous admiring praise from the editorial panel. His self-effacing approach to the original text will undoubtedly allow the rhythm of the sentence to come through in English. He lives in London with his wife and three children.

Actually I never really expected to be a translator. During and after my PhD I taught various German and History courses and planned to have an academic career. But as there were no full-time jobs available, and I had a young family to support, I couldn't wait around until a suitable vacancy arose. At that time I'd been working each year for the Institute of Agricultural Development in Central and Eastern Europe. I translated (and continue to translate) an annual brochure about the academic activities of the Institute. Although I certainly wasn't an agricultural specialist, at least I had a bit of knowledge about the region. Since them I've translated all kinds of topics and publications, but now I concentrate on novels.
Favourite Book
Which German book do you like the best and why?

The second question is too difficult to answer. I have read many German books (as a student, translator or just for my own pleasure!). One author I particularly like is Joseph Roth, especially because his work deals with topics which interest me from a historical persepective.
Translation Wish
Is there a particular book you would like to translate?

A book which I'd one day like to translate is Kirbisch, an epic poem by Anton Wildgans from 1927. This lesser known Austrian writer is generally regarded as second class, but Kirbisch is his masterwork and I was very impressed by it.
Selection of translated titles