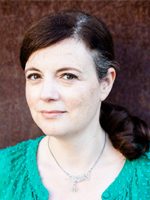 © Katy Derbyshire Katy Derbyshire was born in London in 1973. After studying German at Birmingham University, she continued her education at the University of London and attained a Diploma in Translation there in 2001. In 1996 she moved to Berlin where she worked in various jobs including teaching English to children, until taking maternity leave in 2001. Since 2002 she has worked as a freelance translator of German into English and in 2008 she founded a blog called love german books.

Dream Job
Why did you chose to become a translator? Is it the profession you always wanted?

I studied German literature and it's a marvellous way to bring readers and books together. Initially it was a pragmatic choice - I'm based in Berlin and there isn't much you can do with a British degree here. But as I got more interesting clients and jobs and started branching out into literary translation, I began really enjoying the challenge.
Favourite Book
Which German book do you like the best and why?

It's hard to choose a single one, but at a pinch I'd have to say it's Selim Özdogan's Die Tochter des Schmieds. It's a simple story of a family in rural Turkey, in which the daughter moves to Germany as a "guest worker" at the end. It's beautifully written, full of affection and very inspiring, and it carefully evades many of the stereotypes people have about Turkish women. The writer and I have become friends and I've translated some of his work for catalogues, online projects, etc.
Translation Wish
Is there a particular book you would like to translate?

It would have to be the one above.

Back to "Translators D-L"