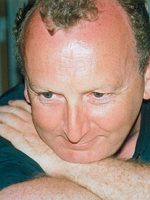 In 2013, he was shortlisted for the Best Translated Book Award (USA) for his translation of Urs Widmer’s Das Buch des Vaters (My Father’s Book, Seagull Books). In 2015, he was awarded the Max Geilinger Prize in Zurich for his translations of Swiss fiction.

An impossible question! So I’ll mention the novel that won me for German: Sansibar by Andersch. I first encountered a radio play version, adapted for school radio. The short stories by Böll and Borchert that I first read at school in Paisley have stayed with me too.
Translation Wish
Is there a particular book you would like to translate?

Musica Leggera by the Swiss writer Franco Supino. Written in German, this is a first novel, a touching love story, and a debut to die for. As Peter Bichsel noted at the time: “Supino has pulled off a book that hundreds of writers before him wanted to write, and did write, but failed. [...] Musica Leggera is the most simple love story in the world, and also the most serious. A love story that is our love story too. I’ve known this book for a long time. I’d just not had the chance to read it as no one had had the courage to go ahead and write with such simplicity.”
Selection of translated titles

Back to "Translators M-R"