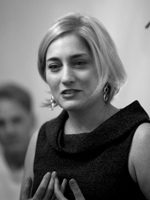 © Albrecht von Alvensleben Liesl Schillinger is a New York–based critic, translator, and moderator. She grew up in Midwestern college towns, studied comparative literature at Yale, worked at The New Yorker for more than a decade and became a regular critic for The New York Times Book Review in 2004. Her articles and essays have appeared in The New Yorker, The New York Times, New York, The New Republic, The Washington Post, Vogue, Foreign Policy, The London Independent on Sunday, and many other publications.

Her recent translations include the novels Every Day, Every Hour by Natasa Dragnic (2012, Viking/Penguin), and The Lady of the Camellias by Alexandre Dumas, fils (Penguin Classics, 2013). Wordbirds, her illustrated lexicon of necessary neologisms for the 21st Century (Simon & Schuster), came out in Oct. 2013.

I grew up in a household filled with foreign literature, both in translation, and in the original. My father taught Russian language and literature, my mother taught journalism and graphic design, and they team-tought courses on the Soviet Union. Throughout my childhood, my parents welcomed an endless procession of foreign professors, poets and journalists to our home—along with gung-ho midwestern American language students. As a result, I can’t remember a time when I wasn’t enthralled by foreign languages and captivated by the mystique—and the reality— of foreign cultures. The posters in the halls of my father’s department at the university (designed by my mother) said: “Learn another language; know another world.” I believe that reading another culture’s literature grants you that same enriching liberty—to know another world; whether or not you speak its language. When I translate —from German, French, Italian or Russian—my goal is to bring readers to immerse themselves in the sensibility of another place, another culture. I might add: when I was five, my parents boarded a German PhD student in our house for a year, named Fritz. Fritz spoke to me in German (my baby brother couldn’t talk much yet), and I was so young that I “got” it. Understanding German made me feel proud... inculcating in me an early sense that knowing foreign languages mattered, and that German was particularly special. My parents recorded a couple of my conversations with Fritz from that era. When I hear them now, I know my accent will never again be as good as it was then. But these days, at least my vocabulary is larger!
Favourite Book
Which German book do you like the best and why?

Asking a literary critic (I’ve been one since 1995) to name a favorite book is like asking a mother to name a favorite child! May I name three standouts (not counting Thomas Mann and Stefan Zweig, whom I adore and reread)? For encapsulating an era with sustained vision, poignance and killing detail, I love Joseph Roth’s Radetzky March (Radetzkymarsch, 1932), which sees one family through the decline of the Austro-Hungarian Empire. For grace, wit and insight, I admire Goethe’s Elective Affinities (Die Wahlverwandschaften, 1809)— an elegant and perceptive novel well ahead of its time that, to be capriciously reductive, you could describe as a thoughtful consideration of the perils of wife-swapping. Beautiful language, and Goethe's storyline in some ways evokes for me one of my favorite English novels about the corrosive force of ego in marriage, Graham Greene’s The Heart of the Matter.  And finally, Hans Fallada’s Jeder Stirbt für Sich Allein, a chilling, gripping novel about a brave and desperate working-class couple in Berlin who launched a postcard campaign against Hitler and were killed for it (based on a real-life case) is essential reading. It's a crucial literary record of the German Resistance, with lasting resonance. The U.S. and U.K. English versions have different titles, respectively: Every Man Dies Alone; and Alone in Berlin.   It’s funny to think that British-English readers and American-English readers prefer different titles—it shows the careful juggling of precision, intuition and whim that is required of the translator’s art.
Translation Wish
Is there a particular book you would like to translate?

I imagine you mean, is there a particular German book I would like to translate? At the Frankfurt and Leipzig Book Fairs, I have been impressed by novels and memoirs written by the influx of immigrants (from Eastern Europe, Turkey, and the Middle East) who have come to the country in the last quarter century. Their voice, their experience, brings the same strengthening  hybrid vitality to the German language that I applaud in American literature of the last decades. It was this energy, this fusion of influences, that drew me to Natasa Dragnic’s Jeden Tag, Jede Stunde! As for one novel in particular; I’d love to tackle anything by Daniel Kehlmann or Bernhard Schlink; but am open to suggestions! If anyone knows of something magnificent and overlooked from the 19th or 20th centuries (or from last month), by all means, let me know…