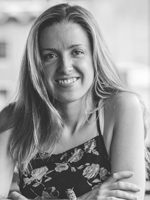 © Jamie Lee Searle After having studied German at the University of Exeter, and translating in-house for Reuters, Jamie Lee Searle then completed an MA in Anglo-German Cultural Relations at Queen Mary, University of London, for which her thesis on Timothy Garton Ash and his contribution to the understanding of the GDR in the UK was awarded with the 2010 Jethro Bithell Award.

She has worked as a freelance literary translator since 2007, and has taught German language and literary translation modules as an associate lecturer at Queen Mary, as well as at the Birkbeck translation summer school. She is a co-founder of the Emerging Translators Network, and a former committee member of the UK Translators Association. She divides her time between London and Florianópolis in southern Brasil, making book-hunting-trips to Germany whenever possible.

I started reading German-language literature in my teens, encouraged by a wonderful teacher, and soon realised that the English-language literary world was missing out on so many great titles. I knew I wanted to do something to help bring these to a wider public; I just didn’t know how. And it was another ten years before I would embrace translation as a full-time career. Looking back now, I feel that all the things I did along the way (bookselling, office management, publishing internships, helping to set up the independent publisher And Other Stories, in-house translation) prepared me for it. The turning point came when I was working for Reuters, translating financial news releases from the German, Swiss and Austrian stock exchanges, because I realised that while I really enjoyed the act of translating, I wanted to do so in a more literary field.

So I started to research online, discovered New Books in German, and wrote to the then-editor, Rebecca Morrison. She became a friend and mentor, and it was through her that I was commissioned to write a report for the BCLT’s In Other Words on the impact of NBG. Around the same time I moved to London, started my MA in Anglo-German Cultural Relations, which included translation modules, and everything developed from there. I was given the opportunity to participate in some wonderful schemes for translators, such as the BCLT/UKTA Emerging Translators programme, the LCB Sommerakademie and the BCLT summer school, all of which were greatly inspiring and informative.
Favourite Book
Which German book do you like the best and why?

Thomas Brussig’s Helden Wie Wir (Heroes Like Us) holds a special place in my memory and heart for being the book which, during my undergraduate degree, sparked my interest in the history of the GDR. I went on to focus on this period of German history in my MA, and it continues to fascinate me even years later. The novel is provocative, irreverent and very, very funny.

Valerie Fritsch’s Winters Garten. This beautifully-written novella held me captive from the very first page, and the story still lingers on in my mind a couple of years later. Fritsch’s prose offers a view of the world which both resonates and surprises at the same time. The narrative has an almost folkloric quality, which reminded me of the work of A. S. Byatt, particularly in Elementals: Stories of Fire and Ice. I would love the opportunity, hopefully someday soon, to translate this exceptional novella into English.