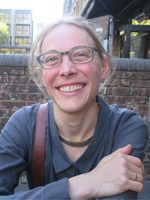 © Imogen Taylor Imogen Taylor studied French and German at New College, Oxford and the Humboldt University in Berlin. She works as a freelance translator in Berlin. In March 2016, she was awarded the Goethe-Institut Award for New Translations.

Like so many translators, I drifted into translation rather than ever making a conscious decision to take it up, but it’s not that there was another ‘profession I always wanted’; I only ever had very hazy ideas about what I’d do when I ‘grew up’. I do remember reading an interview with a translator in New Books in German some years ago and feeling intensely jealous; maybe that’s the point when I realised that translating was something I felt serious about.
Favourite Book
Which German book do you like best and why?

Seven years ago I was given Peter Kurzeck’s Oktober oder wer wir selbst sind (October). At the beginning of each chapter was a five euro note to buy myself chocolate with, but that’s not the reason I like it best. I like it for its language which is so lyrical without ever losing touch with the rhythms and patterns of everyday speech, and for the underlying poignancy of its apparently banal subject matter: nursery school, department stores, poppy-seed cake, trams, tramps…
Translation Wish
Is there a particular book you would like to translate?