mazen kerbaj the interview.mp4 from Counterflows on Vimeo.

His short movie follows an imaginary day in the life of experimental musician Mazen Kerbaj. In more than 15 apparitions, Kerbaj delves into activities as varied as sleeping, talking, praying, playing, or fighting, sometimes alone and sometimes with himself. The result is an accurate yet amusing self-portrait, exploring both the unique music practice of the artist and his humorous approach to megalomania. The film is available until the end of April 2021 at the Counterflows website.

The film and any additional material was created for the 10th edition of the Counterflows festival in 2021 – “Counterflows at home”.

Mazen Kerbaj is a Lebanese comics author, visual artist, and musician born in Beirut in 1975. He also works on selective illustration and design projects and has taught at the American University of Beirut. Kerbaj is the author of more than 15 books, and his short stories and drawings have been published in anthologies, newspapers, and magazines. His work has been translated into more than ten languages in various local and international publications. His paintings, drawings, videos, live performances and installations have been shown as part of numerous solo and collective exhibitions, in galleries, museums and art fairs around the world.

His visual art is heavily influenced by his musical improvisation practice; this is apparent in his long standing “four hands” collaborations with other visual artists, such as Laure Ghorayeb (his mother) and Hatem Imam, as well as his live visual performances, such as Wormholes. Mazen Kerbaj is widely considered as one of the initiators and key players of the Lebanese free improvisation and experimental music scene and as a trumpet player, whether in solo performances or with long-lasting groups like “A” Trio, Kerbaj pushes the boundaries of the instrument and continues to develop a personal sound and an innovative language. 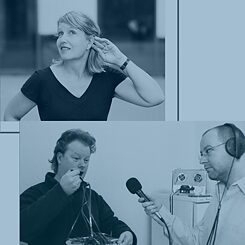 ©Counterflows Sound protrait shows the musicality of language and urban noises. The beauty of this collage inspires optimism. Echos from sound archives unfold their full diversity in this time of crisis and deceleration. A collaboration by Mark Vernon and Barry Burns, experimental musicians, sound artists, radio producers and co-managers of Glasgow’s art radio station Radiophrenia and the Berlin based sound and radio artist Antje Vowinckel.

00:00 00:00
About the Artists: Vernon & Burns and Antje Vowinckel
Vernon & Burns are a duo of sound makers who create radio plays, records and performances through an innovative mix of samples, field recordings, voice and music. They have produced programmes for radio stations including VPRO, Resonance FM, WFMU and The Audible Picture Show and have had records released on Felix Kubin’s Gagarin Records, Akashic Records, Staalplaat’s Mort Aux Vaches series and two LP’s with Lied Music released on Ultra Eczema and Shadazz. Together, they also manage Glasgow based art radio station, Radiophrenia.

Antje Vowinckel is a Berlin based sound and radio artist. She studied literature and music and wrote a thesis on „Collage in radio play“. Her works include  sound art, radioplay and compositions for a variety of public radio stations such as (Deutschlandfunk, WDR, SWR, Radio France) as well as for foreign stations and festivals. In recent years, she has created also live performances, installations in public space and a video composition. Her focus is on the musicality of the spoken word, for example in compositions with dialect melodies or in pieces based on automatic speaking.

Vernon & Burns
How the project came about
The project began with a series of questions and actions devised by Vernon and Burns for Vowinckel to respond to remotely from her home in Berlin. This consisted of queries about her practice and relationship with sound and music, requests for descriptions and recordings of her immediate sound environment, domestic chores, singing, lists, sound memories and an analysis of the qualities of her own voice. All of the resultant material was combined with extracts of Vowinckel’s work and excerpts from field recordings and other compositions by all three artists. The eccentric approach in the resultant audio collage is not intended as an accurate portrait of Vowinckel, more as an impressionistic overview with interventions and twists on the conventional form; thoughts and meditations on the act of purposeful listening and sound creation.

The raw material provided by Vowinckel was cut up, processed, manipulated and recontextualised by Vernon and Burns. The piece, with its playful approach to assemblage and composition, combines the personalities and working methods of all three artists.